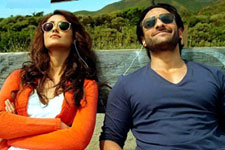 Ravi Kandala / fullhyd.com
EDITOR RATING
6.0
Performances
Script
Music/Soundtrack
Visuals
6.0
4.0
6.0
7.0
Suggestions
Can watch again
No
Good for kids
No
Good for dates
No
Wait for OTT
No
There is one dialogue in Happy Ending that can make your day. The fact that it is uttered by Govinda, the Virar ka Chokra, is merely the icing on the cake. The dialogue translates to: "Life is hard-hitting and intense, movies need not be. Do not attempt to teach people the meaning of life in return for the few hundreds they spend on the ticket." The words ring absolutely true coming from the man who churned out escapist fare almost every other Friday during his glory years in the '90s.

Happy Ending is exactly that kind of fare. Light in tone, both content-wise and visually, the film just skims the surface and refuses to even consider the fact that there could be some depth in a few people / relationships / events. It resolutely refuses to go into melodrama, and that could end up being its biggest strength.

Saif Ali Khan plays Yudi, a writer who'd written a book that clicked five and half years ago, and has been living on the returns ever since. He loves his money, fame and girls, and is content with his life. All of which basically goes to say that he plays the same character he's been playing since his Yeh Dillagi days. That he retains his roguish charm (despite looking at least two decades older than his heroine) is either sheer fortune or a good make-up artist or directors who give him good lines.

So, five and half years after his book, he wakes up one day to find that he's spent all his money and needs to work to sustain himself. His agent takes him to Armaan ji (Govinda), Bollywood's biggest single screen superstar, who is now out to conquer the multiplexes. He commissions Yudi to write him a romedy that will propel him to multiplex fame.

Also part of the proceedings is the interestingly named Aanchal Reddy (Ileana D'Cruz), who's replaced Yudi as his publisher's favourite thanks to her romantic novel Crazy Hearts. The film now revolves around how everyone involved gets a Happy Ending.

First things first - it is criminal that Govinda, in probably his best role after Partner, is used for exactly five scenes. He lights up the screen whenever he's around, and the gyaan he distributes around movie-making is enough material to make a full-length feature. He's brilliant when he's around, and we'll stop now.

The writing is superficial, and skims around anything that could be an issue. Director-duo Raj and Krishna play to their strengths - the multiplex audiences - and make a subtle urban comedy that might not even find a release in the B & C centres. The film reminds you of Saif's Cocktail, and suffers from some of the flaws of that.

Saif Ali Khan plays himself in one role, but has a second role which appears sporadically and entertains immensely. Ileana gets a good character after playing arm candy in her last two releases. Ranvir Shorey plays a sidekick superbly. Kalki Koechlin and Preity Zinta have extended cameos, while Kareena has a truncated one.

The technical values are good. The songs are few and far between, and sound good. The movie is shot superbly, and the visuals are consistently pleasing.

Happy Ending takes a bit of time to take off, but is fun once it does. If an urbane, subtle romantic comedy is your thing, then go see this one - it is non-taxing, and you will laugh out loud a few times.
Share. Save. Connect.
Tweet
HAPPY ENDING SNAPSHOT 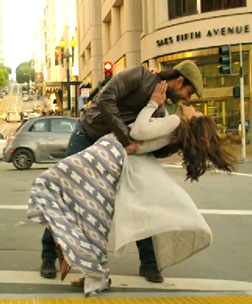 See Happy Ending full details
HAPPY ENDING USER REVIEWS
1 - 1 OF 1 COMMENTS
POSITIVE  |  NEGATIVE |  NEWEST  |  OLDEST  |  MOST HELPFUL  |  LEAST HELPFUL
aswattha on 28th Nov 2014, 7:37pm | Permalink
As per me Movie deserves a rating of 4 (3 for govinda & 1 for Ranvir shorey). If Saif Ali Khans role as Yogi and Kalki's role as Visakha was scrapped and that screen time given to Govinda then it would have been a super hit.

Govinda - Reminds you of why he was such a big star in the 90's. Excellent. Deserved more screen time.

Saif Ali Khan: Good. But not an earth shattering performance and still cannot own every scene he is in like Govinda can.

Ileana: Cant act. Her role is as boring as her reading sessions in the movie. Sleep inducing. If only her role is scrapped and that screen time is shared between Govinda & Ranvir Shorey.

ADVERTISEMENT
This page was tagged for
Happy Ending hindi movie
Happy Ending reviews
release date
Saif Ali Khan, Ileana Dcruz
theatres list
Follow @fullhyderabad
Follow fullhyd.com on
About Hyderabad
The Hyderabad Community
Improve fullhyd.com
More
Our Other Local Guides
Our other sites
© Copyright 1999-2009 LRR Technologies (Hyderabad), Pvt Ltd. All rights reserved. fullhyd, fullhyderabad, Welcome To The Neighbourhood are trademarks of LRR Technologies (Hyderabad) Pvt Ltd. The textual, graphic, audio and audiovisual material in this site is protected by copyright law. You may not copy, distribute, or use this material except as necessary for your personal, non-commercial use. Any trademarks are the properties of their respective owners. More on Hyderabad, India. Jobs in Hyderabad.