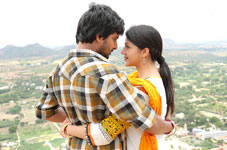 Ravi Kandala / fullhyd.com
EDITOR RATING
7.0
Performances
Script
Music/Soundtrack
Visuals
7.0
7.0
6.0
6.0
Suggestions
Can watch again
Yes
Good for kids
No
Good for dates
Yes
Wait for OTT
No
Hanu Raghavpudi's first movie as a director was Andala Rakshasi. The movie was a damp squib at the box office but it did have its moments. The look and feel, the graffiti and scrap art, and the overall mood of the film showed a director with potential.

His second film, Krishna Gadi Veera Prema Gatha (KGVPG), then, raised enough curiosity. And with Nani delivering a blockbuster with Bhale Bhale Magadivoy, KGVPG turned really hot. The flip side to that must have been Hanu really feeling the pressure to make sure this film would be a box office blockbuster. And his sensibilities as a raconteur must've clashed with the expectations and commercial compulsions.

This clash shows all through the first half. The film moves from being an intense love story in one scene to a comedy in the next to trying to address a serious social ill in the following. He also feels compelled to bring in three or four parallel stories, all of which play out on different canvasses. As a result, a good bit of the first half of KGVPG proceeds like a hotchpotch, and you are getting pulled in all directions, not knowing what to expect next. And then the story takes a turn, you sit up, and Hanu finds his feet.

KGVPG is about Krishna (Nani), a total coward, who lives in a village in Rayalaseema. He is in love with Mahalakshmi (Mehreen Kaur) ever since he can remember but is afraid of her brother Ramaraju, who's the muscle for a local factionist. This factionist's brother, Shrikant (Sampath), is an ACP in Hyderabad. Shrikant's kids come to the village for a vacation, when the house is attacked. After a couple of twists, the kids land up with Krishna and it now becomes his responsibility to take them to Hyderabad safely. This is also tied up with his love story - and how he takes things to a happy ending forms the rest of the plot.

KGVPG is a complicated script - it has three or four parallel tracks, and the characters in each track have no idea how they are affecting the others. This narrative approach is maintained for a long time, and while it leads to some amount of confusion, Hanu manages to keep the tracks going pretty well. And when it all comes together, the audience has an Aha moment, and that is where the film really scores.

The second half revolves around Nani and three kids, and these kids luckily are not the over-smart and annoying filmy kinds. They are the right mix of cute and practical, and the awwwwws ring out in the theatre quite loudly. The comedy also works eight times out of ten. The only things that are out of sync are the violence and the slight drag towards the end.

Nani continues his good work. His comic timing is impeccable, and he's good during the emotional scenes as well. Mehreen Kaur is a Kajal Agarwal look-alike, and does quite well. She's quite expressive, and lip syncs quite well, too. The supporting actors all put in good performances. Prithvi steals the show once again with his comedy - he's really in the golden phase of his career right now.

The producers should've spent some more money on this movie. A couple of scenes which show a moving car are so terrible, you suddenly wonder if they were pasted from some '70s film. The songs are decent, and the choreography for a couple of them at least is quite original. The cinematography and the locales are all nice and vibrant. 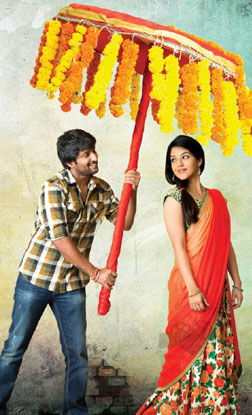 See Krishna Gaadi Veera Prema Gaadha full details
KRISHNA GAADI VEERA PREMA... USER REVIEWS
KRISHNA GAADI VEERA PREMA GAADHA USER REVIEWS
1 - 2 OF 2 COMMENTS
POSITIVE  |  NEGATIVE |  NEWEST  |  OLDEST  |  MOST HELPFUL  |  LEAST HELPFUL
Jwalakaumudi on 22nd Feb 2016, 10:03am | Permalink
I am glad we still have actors like Nani and producers who decided to make a movie like this one. Lovely movie which showed that audiences, despite their blind hero worship, can and will accept good stories and movies which run because of stories. Ironically, that hero worship is what brings the movie to a decent wrap-up.

One should be thankful for discovering the actor in Nani. what a pleasure to watch him ease beautifully into his character Krishna without ever showing Nani in that role! And thanks to Hanu for not showing the lady protagonist as some dumb doll although I have to say that she looked out of place for a small village in Anantapur.

Eyes were comforted seeing Annapurna as well, to be able to hear some good home-made Telugu and continue to believe there is still hope for Telugu cinema!
bakra on 22nd Jun 2016, 5:07pm | Permalink
Nani was not discovered. He has a mom and dad.
chalam on 14th Feb 2016, 7:24am | Permalink
Way back in 2003 (i think) "Eithe" (ఐతే) was a wonderful and strong story backed movie. One of my all time favourite. A true movie where story was the lead actor. Director: Chandrasekhar Yeleti. (ఏలేటి చంద్రశేఖర్)

ADVERTISEMENT
This page was tagged for
krishna gadi veera prema gaadha full movie
Krishna Gaadi Veera Prema Gaadha telugu movie
Krishna Gaadi Veera Prema Gaadha reviews
release date
Nani, Mehreen Kaur
Follow @fullhyderabad
Follow fullhyd.com on
About Hyderabad
The Hyderabad Community
Improve fullhyd.com
More
Our Other Local Guides
Our other sites
© Copyright 1999-2009 LRR Technologies (Hyderabad), Pvt Ltd. All rights reserved. fullhyd, fullhyderabad, Welcome To The Neighbourhood are trademarks of LRR Technologies (Hyderabad) Pvt Ltd. The textual, graphic, audio and audiovisual material in this site is protected by copyright law. You may not copy, distribute, or use this material except as necessary for your personal, non-commercial use. Any trademarks are the properties of their respective owners. More on Hyderabad, India. Jobs in Hyderabad.