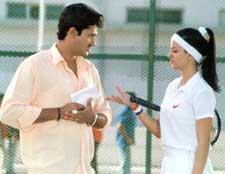 Arpan Panicker / fullhyd.com
EDITOR RATING
5.0
Performances
Script
Music/Soundtrack
Visuals
NA
NA
NA
NA
Suggestions
Can watch again
NA
Good for kids
NA
Good for dates
NA
Wait to rent it
NA
Telugu filmmakers have long since been known to have sensibilities that sound like "sens... what was that again?" And they prove time and again that they have no
finesse whatsoever, and that their grasp over sensitive topics equals Laloo's over semantics.

Once again, a director here tries to portray rape as an issue that deserves more social concern that it gets. The play here is, of course, on the word 'tries'. And he 'fails', and 'miserably'. The way the subject is portrayed here would cause social concern all right, but for rather different reasons. Scantily clad girls displaying promiscuous behavior and a lot of sexual innuendo in conversation and mannerisms that nowadays passes for comedy is the prime fare, and when you add the lewdness with which the rape scene is shot, and the reaction of the frontbenchers to it, you shudder!

Though I rant and rave, you may notice that this movie has been given two in the rating. That is only because as a movie it is passable fare, and the technical aspects are decent, too. What follows is a brief review 'cos that's what is required, and now that the general opinion has been aired, that's no more a problem.

Buddi urf Harikrishna Prasad (Sai Kiran) is a total loser. Fathered by a loser (Tanikella Bharani) who is as crass as they get, and with posh mother and sister in tow, this guy is totally confused and spineless and looks gay-ish. Apart from that, he (the actor, not the character) has no idea what acting is, looks good in "I'm a nerd' roles for all the wrong reasons, has a horrible sense of dressing and wears his hair all wrong. I shall stop at that 'cos I kinda like the guy.

He falls in love with Sravanti (Jennifer), who spends more time laughing at him than singing duets with him. She reciprocates for reasons that are sure to be included in the "Reasons Too Good To Be Stated" list. She turns down a rich brat called Vikrant (Shivaji) for the same afore-mentioned reasons. The rich brat is rubbed on the wrong side, and so rapes her. The hero meanwhile is busy parting his hair down the middle.

The girl shows character, however, and after giving the brat and his dad the sandal treatment, gets them arrested. However, all this is post-rape. The hero's dad is incensed 'cos his son wants to marry a rape victim, and tries to tempt his son with his country cousin who strips every time Sachin scores a boundary (see it to believe it). The guy remains untempted, finds his spine fifteen minutes before the movie is over, beats up the bad guy (why now?) and stops the girl from going away to Delhi.

For the lack of a spine, a movie was made. Sigh!

The songs are okay. The direction seems tolerable, too. The songs fit in fine and the pair dances well. The cinematography et al is pretty decent, too. And these last few lines definitely show that my heart isn't in it!

Wish movie-making efforts like these are directed towards making films that deal with topics whose controversy doesn't go beyond rumored affairs. In an attempt to make movies that make sense, these guys are creating the fabled Sphinx whose lines went something like this:

"Me don't guard this damn place. Me just kill you!"

ADVERTISEMENT
This page was tagged for
manasunte chaalu goregama mp3
manasunte chaalu movie mp3 songs
manasunte chaalu songs
manasunte chalu full movie download
manasu unte chalu movie
Follow @fullhyderabad
Follow fullhyd.com on
About Hyderabad
The Hyderabad Community
Improve fullhyd.com
More
Our Other Local Guides
Our other sites
© Copyright 1999-2009 LRR Technologies (Hyderabad), Pvt Ltd. All rights reserved. fullhyd, fullhyderabad, Welcome To The Neighbourhood are trademarks of LRR Technologies (Hyderabad) Pvt Ltd. The textual, graphic, audio and audiovisual material in this site is protected by copyright law. You may not copy, distribute, or use this material except as necessary for your personal, non-commercial use. Any trademarks are the properties of their respective owners. More on Hyderabad, India. Jobs in Hyderabad.