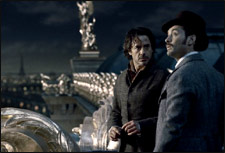 Samrat Sharma / fullhyd.com
EDITOR RATING
5.5
Performances
Script
Music/Soundtrack
Visuals
8.5
3.5
6.0
7.0
Suggestions
Can watch again
No
Good for kids
No
Good for dates
Yes
Wait to rent it
Yes
More than anything, I have admired the first Sherlock Holmes partnership between Downey Jr., Law and Ritchie for its ability to plumb the depths of Arthur Conan Doyle's original stories and create a version of Holmes that felt fresh and interesting while at the same time strictly adhered to canon. The baritsu fight from "The Adventure of Empty House" for example, became an essential thing about the more physical Holmes in the film.

A Game Of Shadows continues on that tradition, directly basing its plot on "The Final Problem". Holmes fans will know what this means - this film is not afraid to go big.

Unfortunately, this film has gone the big and loud route to irrelevance via a detour to boringstan.

The movie tackles the Moriarty myth as a given - Moriarty here is an already established bad guy against whom Holmes must square off at the end of all his adventures - while all we saw of him in the first film was a mere whisper. How he went from being a sinister shadow to the one evil that will bring upon World War I is never explored or explained.

Making matters worse is Robert Downey Jr. and his chemistry, or lack of it, with Jared Harris. Harris is a fine actor, but he internalizes the chaos at the center of what Moriarty does, giving himself a calm exterior that is no match for the manic energy of RDJ that explodes in every screen all the time. The result is a villain who never feels toothy or menacing.

Compounding matters is the pacing: while the first film relied on the chemistry between RDJ and Jude Law's Watson to carry us from one action set-piece to the next, A Game Of Shadows' script gives no room for both of them to bounce off of each other. There is constant bickering, and an increasingly exasperated Watson.

The exact opposite is the ever-amazing Stephen Fry, playing Holmes' elder brother Mycroft. Fry is charming, assiduously affable, and has a booming presence that even RDJ cannot negate. Every scene with him in it crackles with energy and wit, and I can't wait to see more of him if the franchise continues. His turn as Mycroft is also the only time we get to explore Holmes as a character more - the ham-fisted journey that Holmes undergoes with Watson never materializes.

Noomi Rapace, the firecracker actress from the original Swedish Dragon Tattoo films, plays a Gypsy woman who, for some reason, is tied up with the Moriarty business. Her presence is never more than an annoyance for the leads, adds nothing to the plot, and her take on the role is a stoic boring persona that has no connection or awe.

Normally, a film relying entirely on RDJ's considerable charms would have been a slam dunk, but this time around, Ritchie also relies a lot on his action set pieces. They are suitably well-crafted, but have no weight to them. Simply by having no emotional or narrative import for the sequences, they are reduced to flashy versions of the "Sorry for Interruption" boards from Doordarshan. A signal for us to wait until normal programming resumes, when we can take a small morsel of plot.

When in one sequence, Guy Ritchie lets loose his Ritchie-ness, making Holmes and Watson run through an endless barrage of bullets and cannon-fire, you get the essence of the film in an instance. This is a big, dumb film filled with stylistic tics that never mean anything.

It doesn't play with the Holmes mythos, never mind the steam punk veneer - it is actually quite a faithful film. It's just plodding and endlessly infuriating.
Share. Save. Connect.
Tweet
SHERLOCK HOLMES 2: A... SNAPSHOT
SHERLOCK HOLMES 2: A GAME OF SHADOWS SNAPSHOT

See Sherlock Holmes 2: A Game Of Shadows full details
SHERLOCK HOLMES 2: A... USER REVIEWS
SHERLOCK HOLMES 2: A GAME OF SHADOWS USER REVIEWS
1 - 2 OF 2 COMMENTS
POSITIVE  |  NEGATIVE |  NEWEST  |  OLDEST  |  MOST HELPFUL  |  LEAST HELPFUL
USER RATING
9.0
1 USER
Performances
Script
Music/Soundtrack
Visuals
9.0
8.0
10.0
10.0
Can watch again - Yes
Good for kids - No
Good for dates - Yes
Wait to rent it - No
Musafir Hyderabadi on 11th Jan 2012, 7:39pm | Permalink
Reviewer needs to keep in mind that majority of the people who visit fullhyd (to read the editorial reviews) might not be well versed with the characters in the books. They probably would not care if it was an accurate adaptation of the book or not, as long as the movie manages to keep them on the edge of their seats. Keeping that in mind, I think the movie definitely deserves a rating better than 5.5! My personal opinion is that I enjoyed it almost as much as I enjoyed Hellboy (The Golden Army), if not more.


Pros: Amazing background score, Witty dialogue
Cons:
RATING
9
CH on 7th Jan 2012, 11:32pm | Permalink
A sincere request to all the Viewers to not Consider in Reviews in www.fullhyderabad.com. Their reviews are pathetic!!
I went to see this film last week and was immersed in it from the very first minutes.

The action was constant edge of the set stuff, the locations stunning, the CGI, the acting excellent. The use of slow motion in this film adds to the action.

The best part for me was the verbal war of wits between Moriarty and Holmes especially.Clever writing and acting. Also, the ending; it left me wanting more.

ADVERTISEMENT
This page was tagged for
Sherlock Holmes 2: A Game Of Shadows english movie
Sherlock Holmes 2: A Game Of Shadows reviews
release date
Robert Downey Jr., Jude Law
theatres list
Follow @fullhyderabad
Follow fullhyd.com on
About Hyderabad
The Hyderabad Community
Improve fullhyd.com
More
Our Other Local Guides
Our other sites
© Copyright 1999-2009 LRR Technologies (Hyderabad), Pvt Ltd. All rights reserved. fullhyd, fullhyderabad, Welcome To The Neighbourhood are trademarks of LRR Technologies (Hyderabad) Pvt Ltd. The textual, graphic, audio and audiovisual material in this site is protected by copyright law. You may not copy, distribute, or use this material except as necessary for your personal, non-commercial use. Any trademarks are the properties of their respective owners. More on Hyderabad, India. Jobs in Hyderabad.