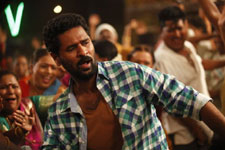 Ravi Kandala / fullhyd.com
EDITOR RATING
5.5
Performances
Script
Music/Soundtrack
Visuals
6.0
4.0
6.0
6.0
Suggestions
Can watch again
No
Good for kids
No
Good for dates
No
Wait for OTT
Yes
At the risk of being branded parochial, allow us to make this observation. South Indians, Tamilians especially, are not the best speakers of Hindi. They may be able to do everything else as competently as, or even better than, everyone else, but ask them to speak Hindi, and they end up doing the unmentionable to the language.

ABCD (Any Body Can Dance), then, makes the fatal mistake of making a Tamilian actor speak in Hindi through the length of the film. Prabhu Deva, the man who is called the boneless wonder and India's Michael Jackson, dances like a dream, but speaks Hindi like a nightmare.

The movie itself follows all the clichés that an underdog movie has. It starts off with the standard Good Vs Evil format, with the good here represented by Vishnu (Prabhu Deva), a man for whom dance is life. The bad is personified by Jehangir (Kay Kay Menon), owner of the Jehangir Dance Academy (JDC).

Vishnu gives 15 years of his life to JDC, only to be kicked out by Jehangir in favour of a phoren dance master (a totally stereotyped character wearing skin-tight striped pants).

Vishnu goes to his old friend Gopi (a verbose and irritating Ganesh Acharya), and plans to leave Mumbai and go back to Chennai forever. But then, he spots a group of local kids dancing and fighting away to glory in the basti, and decides that he will train them and help them win Dance Dil Se, a reality show which is always won by JDC.

What happens then is a story that will blindside you completely and take your breath away - nah, not really. What actually happens next is as standard and clichéd as any underdog formula film. ABCD follows the format in such a rigid and strait-jacketed manner that Jehangir is mostly dressed in black and Vishnu is mostly dressed in white.

Every emotion - sorrow, happiness, anger, jealousy - is settled with a dance movement or a song. When you expect a character to behave in a certain manner, that character will behave in that exact manner, and not a bit more. Remo D'Souza does not just take the safest road available, he also stays in the slowest, left-most lane, away from any possible accidents.

What saves ABCD are its dance sequences. The film has some truly amazing dance sequences, and there are a number of scenes where the audience is left agape.

All the actors, picked from several dance reality shows, dance wonderfully, and act just enough to carry off the scene they are in. Dharmesh and Salman carry the film on their shoulders, while the others, including Vrushali Chavan and Lauren Gottlieb, competently enact supporting parts. Ganesh Acharya is shrill and irritating, and there is many a time you wish the guy would just shut up.

The music serves its purpose, and elevates the dance sequences. Remo the choreographer acquits himself well, while Remo the director takes a back seat.

ABCD is a decent one-time watch if you excuse the clichés. If you are the kind that enjoy Dance India Dance and other reality shows, this one could be your perfect weekend watch. Also, the 3-D is mostly gimmicky, and the 2-D version will probably be just fine.
Share. Save. Connect.
Tweet
ABCD - ANY BODY... SNAPSHOT
ABCD - ANY BODY CAN DANCE (3D) SNAPSHOT 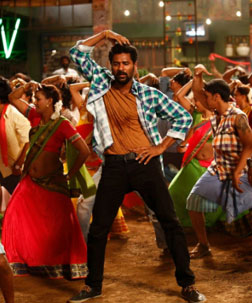 ADVERTISEMENT
This page was tagged for
ABCD - Any Body Can Dance (3D) hindi movie
ABCD - Any Body Can Dance (3D) reviews
release date
Prabhu Deva, Ganesh Acharya
theatres list
Follow @fullhyderabad
Follow fullhyd.com on
About Hyderabad
The Hyderabad Community
Improve fullhyd.com
More
Our Other Local Guides
Our other sites
© Copyright 1999-2009 LRR Technologies (Hyderabad), Pvt Ltd. All rights reserved. fullhyd, fullhyderabad, Welcome To The Neighbourhood are trademarks of LRR Technologies (Hyderabad) Pvt Ltd. The textual, graphic, audio and audiovisual material in this site is protected by copyright law. You may not copy, distribute, or use this material except as necessary for your personal, non-commercial use. Any trademarks are the properties of their respective owners. More on Hyderabad, India. Jobs in Hyderabad.