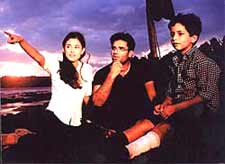 Smriti Kashyap / fullhyd.com
EDITOR RATING
5.0
Performances
Script
Music/Soundtrack
Visuals
NA
NA
NA
NA
Suggestions
Can watch again
NA
Good for kids
NA
Good for dates
NA
Wait for OTT
NA
The worst part about Sunil Shetty is that he seems to be desperate to be taken as a serious actor and so needs audiences who can turn a completely cataract eye while he brandishes his non-existent acting skills. Ehsaas is no different - Shetty's desperation comes across as clearly as a fly in Chinese clear soup.

The flick itself is a welcome change from the mundane prancing around the Swiss Alps, but like a truck driver driving on a full stomach, it fails to deliver the right goods at the right time. The story revolves around two neighbors - Antara (Neha) and her Ma (a ghoulish looking Kiron Kher) on one side of the picket fence, and macho man Ravi (Sunil Shetty) and his 10-year-old Rohan on the other.

Ravi plays an ambitious father who doubles up as a slave driver as he pushes his son to zip across the track field so that he can waltz away with the inter-school trophy. But the kid, being a kid, hates to be woken up at unearthly hours for the practice, and craves for affection from his Dad. Rohan thus finds a friend, philosopher and guide in Antara, the girl next door, as he sobs thankfully into her shoulders for most part of the flick.

Antara is herself a young widow, and soon, due to the intense gravitational field around widower Shetty, finds herself drawn to him. What happens is la-di-dah stuff as the obligatory songs are thrust on us. Come to think of it, the songs were pretty passable, and Sunidhi Chauhan does a jack in the box cameo.

The film takes a lethargic turn and all's well that ends well and stuff like that. The script is noble at heart, but the cast and crew seemed to be slothful and drag their feet along towards the end, and we're left with assembly line acting and emotions.

The performances are kinda all right, with Neha and her tender face all over the screen. She acts like she's acting, but seems so anemic that it makes you wanna reach out for the IV drip and plug it into her. Kiron Kher does a neat job as the concerned mother, and the kid Rohan is absolutely brilliant as he bolts across the track.

My pet peeve Sunil Shetty seems to have gotten his lucky bicycle from Yeh Tera Ghar... into this flick hoping that the right positioning of the bike might result in the critics making the right noises. No such luck, bro - the next time try placing the bike in a north-northeasterly direction.

That's the lowdown - while you might snooze off in the first 15 minutes in the theater, you might, on the other hand, watch the movie in its entirety at home. It's a case of CD-itis. So, don't bother to un-potato yourself from the couch - stay home and round up the movie.
Share. Save. Connect.
Tweet
EHSAAS SNAPSHOT

ADVERTISEMENT
This page was tagged for
Ehsaas hindi movie
Ehsaas reviews
release date
Sunil Shetty, Neha
theatres list
Follow @fullhyderabad
Follow fullhyd.com on
About Hyderabad
The Hyderabad Community
Improve fullhyd.com
More
Our Other Local Guides
Our other sites
© Copyright 1999-2009 LRR Technologies (Hyderabad), Pvt Ltd. All rights reserved. fullhyd, fullhyderabad, Welcome To The Neighbourhood are trademarks of LRR Technologies (Hyderabad) Pvt Ltd. The textual, graphic, audio and audiovisual material in this site is protected by copyright law. You may not copy, distribute, or use this material except as necessary for your personal, non-commercial use. Any trademarks are the properties of their respective owners. More on Hyderabad, India. Jobs in Hyderabad.