In Her Shoes Review 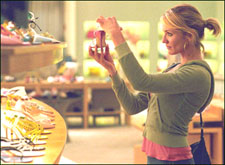 Samrat Sharma / fullhyd.com
EDITOR RATING
6.0
Performances
Script
Music/Soundtrack
Visuals
NA
NA
NA
NA
Suggestions
Can watch again
NA
Good for kids
NA
Good for dates
NA
Wait for OTT
NA
You may dislike the term "chick flick" (mostly, if you're a woman), or chuckle at it and fear it (if you're a man), and I really, really don't want to label this film this early in a review, but the fact is that Curtis Hanson's latest is a film with a decidedly female bent. The main characters, the family dysfunctions and the story's progression all serve to showcase three leading ladies and a story about female bonding and family values above everything.

But on the other hand, this is also a fairly well-made drama about family and relationships, with enough emotional depth to be called a good film in its own right. The name Curtis Hanson in the credits should be enough, really, to convince you (his LA Confidential got universal praise, and Wonder Boys was very well received as well), but let's see how it all plays out, shall we?

This is the story of the Feller sisters. Rose (Toni Collette) is a hard-working and career-oriented attorney working in Philadelphia. She lives only to work and advance her career, and has zero to no personal life. Her sister, Maggie (Cameron Diaz), is a good-looking extrovert blonde, who has coasted along life on looks and sex alone. She is what would be called a "hippy" in our parents' times.

The two opposites meet when Maggie moves in with her sis after some bad luck. After a lot of cat-fight tension between the sisters, things reach a head when Rose's flirtatious boyfriend shows a glad eye for Maggie, and Maggie responds. Rose, obviously, throws a fit and throws Maggie out of the house. With nowhere to go, Maggie discovers that her grandma, who she had thought to be dead, is living in a retirement community in Florida.

Ella (Shirley Maclaine), the grandmother, is a tough cookie who welcomes her, and starts putting her back on life's track, slowly but surely.

Now, I know what you're thinking, it sounds terribly like a chick flick. And you're quite right, it does. The story is pretty standard fare, but the strength of the film lies in its ability to show genuinely funny and emotional moments through characters that you can relate to. Despite this being an American film with women dominating the screen, everyone can see the characters' insecurities and their family bonds for what they are, and relate to them to an extent. This is also thanks to the cast.

Cameron Diaz has played so many fun-loving party girls, she is almost a natural for the role. Nevertheless, she delivers a performance that has something new to it. She exposes a comic streak we have enjoyed in the past, but also an insecure nervous portrayal that surprises us.

Toni Collette's performance is mostly straight and by the rules, but without her firm control over the screen when she is present, Diaz would not have been able to do jack.

Shirley Maclaine is the surprise package here. She plays her tough grandma with witty lines and a twinkle in her eye. She gets some really funny and some very emotional moments with Diaz, and she delivers it with uniform levels of brilliance throughout.

Curtis Hanson is a director who does not gloss his film over with too much style. He keeps it plain and simple to tell a good story. He manages to keep his characters in control so that no character gets too dominating on screen. He makes sure that everything he puts in the movie is for the benefit of telling the story, and nothing else. This makes it an incredibly less cheesy film than you might think it is.

So even though the sibling rivalry in the film looks like something you have seen before, the actors and Hanson make sure that this is more than your average Cosmopolitan flick. And even though this is a movie where you can tell how it will end, right down to the hugs and the tears and the laughs, it builds up a surprising amount of sensitivity and emotions.

In Her Shoes is a film that is hard not to praise for its effort, but on the other hand it is utterly predictable. And to top that, it does tend to get overly sentimental at times. Yes, it may be a chick flick after all. On the other hand, it is not a standard chick flick, but a smart film with genuine affection and feelings. If you watch this one regardless of who you are and what you think of the term "chick flick", you are bound to enjoy yourselves.
Share. Save. Connect.
Tweet
IN HER SHOES SNAPSHOT

ADVERTISEMENT
This page was tagged for
In Her Shoes english movie
In Her Shoes reviews
release date
Cameron Diaz, Anson Mount
theatres list
Follow @fullhyderabad
Follow fullhyd.com on
About Hyderabad
The Hyderabad Community
Improve fullhyd.com
More
Our Other Local Guides
Our other sites
© Copyright 1999-2009 LRR Technologies (Hyderabad), Pvt Ltd. All rights reserved. fullhyd, fullhyderabad, Welcome To The Neighbourhood are trademarks of LRR Technologies (Hyderabad) Pvt Ltd. The textual, graphic, audio and audiovisual material in this site is protected by copyright law. You may not copy, distribute, or use this material except as necessary for your personal, non-commercial use. Any trademarks are the properties of their respective owners. More on Hyderabad, India. Jobs in Hyderabad.