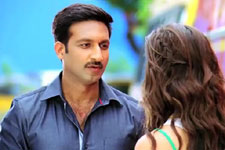 Ravi Kandala / fullhyd.com
EDITOR RATING
5.0
Performances
Script
Music/Soundtrack
Visuals
6.0
3.0
6.0
6.0
Suggestions
Can watch again
No
Good for kids
No
Good for dates
No
Wait to rent it
No
Violence is a powerful tool in cinema. You can use it to build hatred in the audience for a villain, or you can use it to build public opinion for or against an event. Or in the case of Telugu cinema, you can use it to repulse people. Like Jil does. Imagine a person having five people on their knees and bashing their skulls in with a baseball bat - multiple times each to ensure the skull is fully bludgeoned. Imagine a guy stabbed with a pickaxe, dragged on the ground with the pickaxe and then having a foot planted on his chest so the hero can pull the pickaxe out. Repulsed yet?

Those are two instances in Jil which will probably be categorized in the annals of Telugu cinema as stylized action - meaning that most of the shots in the movie are in slow motion including the blood splashing and the skull caving in. Stylized depiction also means that the hero, who's a fireman, drives a remodeled Bullet, lives in a swanky duplex and wears supremely chic outfits.

Jil is about Jai (Gopichand), a fireman. He falls in love with Savitri (Rashi Khanna) at first sight and she, of course, reciprocates soon. By sheer dint of coincidence, he ends up saving Ranganath (Brahmaji) - first from a bunch of goons and then from a fire accident. This brings him into direct confrontation with Chota Naik (Kabir Duhan Singh), a dreaded don.

Jai pisses the don off big time and spends the second half losing people he loves and killing the don's men until the don himself is vanquished, whilst romancing the heroine and also slapping her (which seems to be Gopichand's trademark - we're yet to come across a film where he's not slapped his leading lady).

Jil is, as we said, stylized - which means that the movie is shot in beautiful locales and swanky mansions, and has people driving modish bikes and cars, and wearing well-cut clothes. The film's plot is a yawn - you can predict that a person will die in the second half the moment they utter a cliché in the first half.

The only thing that saves Jil is the pace at which the movie moves. The film dashes on from one incident to another, and hardly allows the audience to be bored. Radhakrishna, the new director, concentrates on a making a good-looking movie and not necessarily a good movie.

Gopichand gets a makeover - he wears denim and linen shirts, and walks around with a swagger as is his wont. He dances quite a bit and seems to have put some efforts in that direction. Rashi Khanna has about six expressions, and manages quite well with those. It's the villian that's a revelation - Kabir Duhan Singh looks and acts pretty scary.

The songs are all shot like glitzy music videos, and for some reason, some random dancers from Spain get more screen space than the actual leads. The production values are good.

Jil is more of what you've seen in previous Gopichand films, with a lot of style thrown in. Go if you want to sit through another standard issue summer blockbuster, but keep your kids at home.
Share. Save. Connect.
Tweet
JIL SNAPSHOT 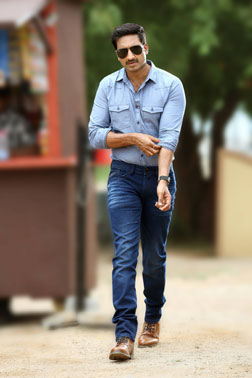 ADVERTISEMENT
This page was tagged for
Jil movie pics
Jil telugu movie
Jil reviews
release date
Gopichand, Raashi Khanna
Follow @fullhyderabad
Follow fullhyd.com on
About Hyderabad
The Hyderabad Community
Improve fullhyd.com
More
Our Other Local Guides
Our other sites
© Copyright 1999-2009 LRR Technologies (Hyderabad), Pvt Ltd. All rights reserved. fullhyd, fullhyderabad, Welcome To The Neighbourhood are trademarks of LRR Technologies (Hyderabad) Pvt Ltd. The textual, graphic, audio and audiovisual material in this site is protected by copyright law. You may not copy, distribute, or use this material except as necessary for your personal, non-commercial use. Any trademarks are the properties of their respective owners. More on Hyderabad, India. Jobs in Hyderabad.