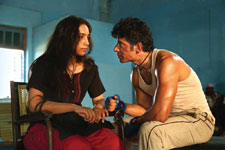 T J Reddy / fullhyd.com
EDITOR RATING
6.0
Performances
Script
Music/Soundtrack
Visuals
8.0
5.0
8.0
7.0
Suggestions
Can watch again
Yes
Good for kids
No
Good for dates
No
Wait to rent it
No
The lasting lesson Anurag Kashyap wants to leave you with after inviting you to absorb his most recent cinematic offering is to have you well and truly understand the difference between the words Mukkabaaz and Mukkebaaz.

Kashyap is not one to dabble in vocabulary lessons for you. He sticks to his MO while choosing to craft a story using said words, and doesn't bother spoon-feeding definitions to his audiences. The story attached to said words is of an amateur boxer named Shravan Kumar Singh (Vineet Kumar Singh). He lives in Bareilly and dreams of becoming Uttar Pradesh's very own Mike Tyson.

Alas, dreams in Kashyap's world don't come with glossy sets, peppy duets, simple conflicts and even simpler resolutions. Shravan's goals, be they professional, personal or otherwise, are safely kept away from his reach by the casteist, classist, chauvinistic and glassy-eyed Bhagwan Das Mishra (Jimmy Shergill). Mishra's relentless manipulation of the system combined with his heinous abuse of power makes him a formidable Goliath Shravan needs to slay to succeed.

Even if many opinions you read about this film tend to find similarities with that Biblical story, we at fullhyd.com are convinced that Mukkabaaz is a Kashyap-y version of the Ramayana. Yes, the film does not have a Hanuman, a Soorpanakha or an army of monkeys, but what it does have is a delectable and clearly defined Sita - Sunaina, played by the utterly gorgeous Zoya Hussain.

Kashyap places his reality-infused mythological characters on the unforgiving and biased landscape simply known as Indian sports. The realities of why the much-maligned quotas and reservations exist are explored throughout this dust-drenched saga of pain and love, and the final frame makes you look inward and ask questions of your own sense of nationality, morality, patriotism and exceptionalism. In conjunction, Kashyap and his team of five writers discuss feminism and the systematic oppression of women by choosing to make their lead female character a mute who can hear.

While the intelligent social commentary comes from these plot threads, the film's more direct overarching arc that involves a passionate athlete fighting against the system to achieve his goals chronicles the trials and tribulations he goes through on his dark and dirty road, and is what makes the film more consumable.

The word consumable can easily be replaced with accessible. Mukkabaaz is quite possibly the first Anurag Kashyap film that can be classified as mainstream. While this might attract a fresh set of eyes to the man's work, it also comes with a caveat. The admirable effort is slightly marred by the constant incorporation of clichés in a significant portion of the second half. The movie's noticeable length coalesces with these clichés and makes for scenes that appear repetitive and tired. Nagging wives, kidnapped love interests, a menacing yet one-dimensional villain and decommissioned parental figures have all been done before, both well and poorly.

Kashyap's work tries to mitigate the familiarity by means of an electric score and his trademark visual style, but these tropes have been incorporated one too many times in the past to be overlooked.

What is not to be overlooked is lead actor Vineet Kumar Singh's exceptional performance. The man doesn't stand on ceremony displaying his body like some 50-year-old leading male stars. He understands that starring in a film is a showcase of his hours of training at acting classes and not the hours spent at the gym. He quickly embodies his role, and his palpable commitment holds your attention with a vice-like grip.

His female counterpart matches his intensity pound for pound. Zoya Hussain is both angelic and tough enough to raise a dust cloud of scorn. She speaks volumes with every dart of her eyeball, and literally breaks Shravan's nose with a single blow. Her reasons for falling in love with Shravan echo the sentiments of many a woman the world over, and we would like you to figure out her motivations out for yourself rather than spoiling it and ruining the fun.

Jimmy Shergill's and Ravi Kisan's characters are akin to the movie's score and cinematography. The two men are ruthlessly vile and comforting respectively, and the film's audio-visuals toggle between the emotions their characters induce effortlessly. Kashyap's and his team's mastery of the craft of filmmaking is second to none, and this film, like many of their previous works, is a clinic in how to maintain tone and tell a story sans hollow frills.

The lack of these hollow frills when dealing with such a straightforward story is what keeps the movie from being either a stone-faced cult classic or a universally beloved entertainer. It balances itself on two boats quite well when it substitutes those sparkly arrows from the TV serial with stinging blows courtesy of Shravan Singh's gloves and Anurag Kashyap's pen.

But wit and charm can carry a movie only so far if the clichés of the genre are also part of the offering. Kashyap and co do fight to the last minute, and the film's final sequence works as both a scathing critique of the society we find ourselves in and a knowing wink at the audience referring to the film itself. A person/movie can be either a mukkabaaz or a mukkebaaz. The screen isn't big enough for both of them. Mukkabaaz, the film, understands the limitations its medium and itself while making the audience aware of it with the "show, don't tell" rule.
Share. Save. Connect.
Tweet
MUKKABAAZ SNAPSHOT 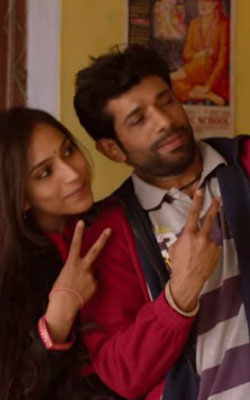 ADVERTISEMENT
This page was tagged for
Mukkabaaz hindi movie
Mukkabaaz reviews
release date
Vineet Kumar Singh, Zoya Hussain
theatres list
Follow @fullhyderabad
Follow fullhyd.com on
About Hyderabad
The Hyderabad Community
Improve fullhyd.com
More
Our Other Local Guides
Our other sites
© Copyright 1999-2009 LRR Technologies (Hyderabad), Pvt Ltd. All rights reserved. fullhyd, fullhyderabad, Welcome To The Neighbourhood are trademarks of LRR Technologies (Hyderabad) Pvt Ltd. The textual, graphic, audio and audiovisual material in this site is protected by copyright law. You may not copy, distribute, or use this material except as necessary for your personal, non-commercial use. Any trademarks are the properties of their respective owners. More on Hyderabad, India. Jobs in Hyderabad.