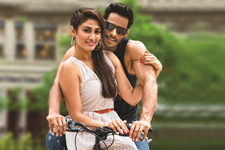 Swaroop Thotada / fullhyd.com
EDITOR RATING
4.0
Performances
Script
Music/Soundtrack
Visuals
3.0
3.0
4.0
7.0
Suggestions
Can watch again
No
Good for kids
No
Good for dates
No
Wait for OTT
Yes
It would be such a sight to see a humongous pile of money set on fire, evident from the scene in The Dark Knight. Gives us a contumacious pleasure, even just watching it. That's what Jaguar could have been, had they directly lit the budget and filmed it, for that would have made a much shorter, more impactful and more satisfying viewing than this movie.

The movie opens with Jaguar (Nikhil Gowda), a masked vigilante superhero, mercilessly killing subtlety and the film's least important villain in a cheesy fight sequence. And Jaguar has this strange habit of live-telecasting his murders on his favorite news channel, by hacking it. Perhaps he doesn't want his glorious matrix style mid-air punches to go unnoticed. Is this a ploy to connect with the narcissistic Facebook generation of today? Nope. This film is not that smart to be decidedly that dumb.

Anyway, a chase ensues where we see him jump off rooftops and Batman his way out, thanks to the invisible ropes and skillful stuntmen. The completely implausible yet enjoyable fight sequence promises more than what this film can deliver. The film could have been a so-bad-its-actually-good B-movie, had it held on to its strength: playfully choreographed preposterous fights. But then it remembers that it is actually a debut vehicle for a star-kid, and that all his talents should be unleashed on the hapless audiences.

So this Jaguar is a masked crusader of crime by night, but by day he is an S S Krishna, a chick magnet, a prodigious medical student, a world-class hacker and a college rebel all the while ceaselessly being a man with a heart of gold. And how else can the movie showcase all these traits without an airheaded slick chick that is born only to be wooed by our hero's ludicrous one-liners? So we have Priya (Deepti Sati) for that.

The medical college where much of the first half takes place is populated by these comedians who look and behave like anything but medicos. And they all seriously engage in the race of preposterousness with the screenplay but eventually lose to it. Take this for instance. Priya's pet dog goes missing as part of an ingenious plan by Krishna to impress her. After finding the dog, she places it before a canvas and asks it to paint the face of the thief. As if that's not enough to make you kill yourself for buying the ticket, the dog actually does paint the face. Apparently this is a movie about superheroes and superdogs.

Jagapathi Babu plays the mandatory badass cop with quirky antics that these films demand but he is given nothing much to do. So he ends up tweeting on his smartphone most of the time. The film itself, having nothing better to do, displays his tweets, and Babu actually reads them out in case you are too lazy to read.

You only need to be as smart as the director to predict that there is a revenge story lurking behind its juvenile plot, and by the time it is elaborately unfolded, you might not even be watching the screen. It's not that you can predict the proceedings, but that you don't even care to predict what's happening anymore, thanks to the mind-numbing boredom the film induces.

Say what you may but it is becoming increasingly tiresome to see Rao Ramesh playing the spotless righteous man. An actor like Prakash Raj plays it with a tinge of almost unnoticeable whimsical theatricality that makes it somewhat bearable. But Rao Ramesh rubs the righteous shtick all over your face until you pass out of oversaturation.

Thaman's songs help a lot by making you think where you heard them before, thereby providing brief escapes from the film. But it only takes a minute or two to figure it out. So sad.

The climax puts the last nail in the coffin, when it imports from movies decades old, a white-saree-clad widowed mother (Ramya Krishna) watching with glee as her son thrashes the goons to pulp. She actually delivers a belligerent speech that goes like "veede naa balam". Okay already.

The only trace of sanity in this movie is the performance of Adarsh Balakrishna and the decent cinematography. Nikhil Gowda falls somewhere between confident and overconfident. He can dance, fight and manage to not look ridiculous, thanks to his tall and well-built frame, but is otherwise unremarkable. Aditya Menon, Sampath Raj and Supreeth deliver what is expected.

The movie could have been bearable had it been smart enough to realize its own forgivable naivete. But alas, this Jaguar ends up attacking its audiences.
Share. Save. Connect.
Tweet
JAGUAR SNAPSHOT 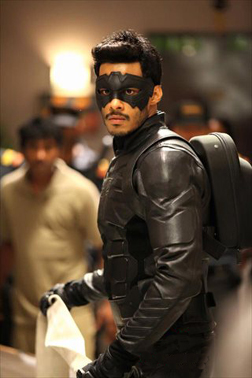 ADVERTISEMENT
This page was tagged for
Jaguar telugu movie
Jaguar reviews
release date
Nikhil Gowda, Deepti Sati
theatres list
Follow @fullhyderabad
Follow fullhyd.com on
About Hyderabad
The Hyderabad Community
Improve fullhyd.com
More
Our Other Local Guides
Our other sites
© Copyright 1999-2009 LRR Technologies (Hyderabad), Pvt Ltd. All rights reserved. fullhyd, fullhyderabad, Welcome To The Neighbourhood are trademarks of LRR Technologies (Hyderabad) Pvt Ltd. The textual, graphic, audio and audiovisual material in this site is protected by copyright law. You may not copy, distribute, or use this material except as necessary for your personal, non-commercial use. Any trademarks are the properties of their respective owners. More on Hyderabad, India. Jobs in Hyderabad.