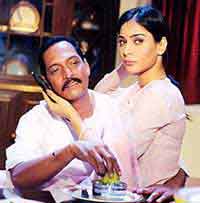 Amit Alampally / fullhyd.com
EDITOR RATING
1.0
Performances
Script
Music/Soundtrack
Visuals
NA
NA
NA
NA
Suggestions
Can watch again
NA
Good for kids
NA
Good for dates
NA
Wait for OTT
NA
"Vadh" is the worst that happened since 'An ode to a small lump of green putty I found in my armpit one midsummer morning'. My brain couldn't contend with the problem of what my eyes told it they were watching, and in doing so it relinquished control of what it was making itself think. Fortunately for you, I am not writing about it. Unfortunately, I am writing about things much worse.

The flick opens with the escape of a psycho known for his skill at slitting the necks of people easier than Jayalalithaa gets verdicts in her favor. A spate of killings soon after that obviously points the needle of suspicion towards him. Then we move on to watch Aryan (Puru Raj Kumar), a hedonist, in his routine. Incidentally (at least for now), all the murders hereafter are of Aryan's overwrought objects of pleasure.

Dr. Arjun Singh (Nana Patekar), psychiatrist by profession, is "one-man-everything" for the Rajputs of Mumbai, and is happily wed to Jyothi (Anupama Verma). Ever since Arjun's parents pass away, the only priority in his life is his younger brother Vijay, a cop. Soon you get to know that Arjun and Aryan were playing pally-pally for long. Sooner still you are told that Vijay has resolved to take Aryan to task for the all murders, although he hasn't any proof yet.

By a strange quirk of fate, the serial killer now plans to target Dr. Arjun Singh and his wife Jyoti (Anupama Varma). What happens after that, why it is happening, why we too weren't murdered before seeing this and other related questions spring up in your mind, if it hasn't gone Ctrl-Alt-Del yet.

I probably would have thought more about the movie than its crew itself. Deathly lost, this can't be real ...cannot stand this hell I feel. Seems like the movie was made by splicing strips of film together and hitting stop when it hit 150 minutes. Not that it would make too much of a difference, but the background score went out of sync to further deepen our misery. The review is longer than the script by nothing less than four hundred and fifty words, which incidentally is also the length of the review. Barring Nana Patekar, none of the other actors came anywhere close to acting. But for him, there wouldn't have been anything in the movie to deserve its single point. Save a song by Jagjit Singh ("Bahut Khoobsurat"), other songs sound best with ears closed.

If flicks like these continue seeing the light of the day and if unsuspecting souls like me end up watching them, then the day is not far when movies would carry a mandatory tag line: "Experiments on rats - successful".
Share. Save. Connect.
Tweet
VADH SNAPSHOT

ADVERTISEMENT
This page was tagged for
vadh movie
film. vadh. . photo.
Vadh hindi movie
Vadh reviews
release date
Follow @fullhyderabad
Follow fullhyd.com on
About Hyderabad
The Hyderabad Community
Improve fullhyd.com
More
Our Other Local Guides
Our other sites
© Copyright 1999-2009 LRR Technologies (Hyderabad), Pvt Ltd. All rights reserved. fullhyd, fullhyderabad, Welcome To The Neighbourhood are trademarks of LRR Technologies (Hyderabad) Pvt Ltd. The textual, graphic, audio and audiovisual material in this site is protected by copyright law. You may not copy, distribute, or use this material except as necessary for your personal, non-commercial use. Any trademarks are the properties of their respective owners. More on Hyderabad, India. Jobs in Hyderabad.