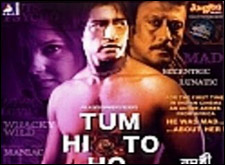 Kakoli Mukherjee / fullhyd.com
EDITOR RATING
1.0
Performances
Script
Music/Soundtrack
Visuals
1.0
2.0
4.0
2.0
Suggestions
Can watch again
No
Good for kids
No
Good for dates
No
Wait to rent it
No
Watching 'Tum Hi To Ho' took me back to the days of my childhood when, in a moment of utter boredom, I would flip the channels to Bangladesh TV and derive innocuous fun by watching the tubby hero of a C-grade potboiler making vigorous pelvic thrusts, or the vile villain making inane passes at the heroine. But I'd have the remote-control firmly in hand to restore sanity in time, as too much of that asininity had the potential to render you brain-dead.

Unfortunately, in the case of Tum Hi To Ho, there was no remote-control at hand, and professional commitment made me stick valiantly to the seat in the face of the guerilla-like assault on the grey cells.

While trying to figure out the rationale behind making a movie like Tum Hi To Ho, you can be sure of three basic assumptions that the filmmakers must have made at the outset: a) The characters in the movie have brains the size of peanuts, b) The audience has brains the size of peanuts, and, c) The box-office collections (if they ever thought of that) will be peanuts. Now that you have emphathised fully with the makers, the story might not hurt that much.

Rajeev (Vipinno), a wastrel with a stinking-rich uncle, is shattered when he loses his girlfriend Anna (Madhavi Sharma) in a car accident. He decides to end his trauma (and ours, too) by killing himself, but then in comes Pooja (Madhavi Sharma), an Anna look-alike, and he immediately abandons all his suicide plans (alas!). But Rajeev suffers another blow when he comes to know that Pooja is married, and kills the husband, Rahul, in order to not lose Pooja (or Anna) a second time.

Rajeev then makes an ingenious plan of convincing Pooja to marry him. He claims to be the only one who can see Rahul's 'aatma', and bears the dead one's tidings to his bereaved family. By the filmmakers' assumption a), the good folks trust him without blinking an eyelid, and agree to marry off Pooja to Rajeev. At this, our hero breaks up into a song strumming his guitar with orgasmic delight, while his crisp, straightened hair fans his face.

But his happiness is short-lived as a renowned detective (Jackie Shroff) enters the scene, and with an astuteness rivalled only by that of Sherlock Holmes, solves the nerve-wracking case, leaving you to mull over the performances.

It seems that everyone in the cast, including Jackie Shroff, needs an urgent trip to an acting school. This is the only film, perhaps, where you will find yourself liking Dolly Bindra, and will even go so far as to call her an actress, as she shouts and swears as the cantankerous wife of a side character, and looks real.

The only saving grace (by not-so-conservative estimates) is the music of the film by Anand Milind, which is superior for a film of this quality.

Henceforth, let the banners of Tum Hi To Ho (if you come across any) remind you of the sacrifice a reviewer made to warn you to keep away from such a movie.

See Tum Hi To Ho full details
TUM HI TO HO USER REVIEWS
1 - 1 OF 1 COMMENTS
POSITIVE  |  NEGATIVE |  NEWEST  |  OLDEST  |  MOST HELPFUL  |  LEAST HELPFUL
Ayan on 7th Feb 2011, 1:29pm | Permalink
Overall this album has got all kinds of songs, all unique & distinct & should appeal to audiences belonging to different genres. Sadly apart from noted film actor Jackie Shroff, composer duo Anand Milind along with other playback singers, the entire leading cast & crew are more or less new which adds up to the risk of failure at the Box Office. But certainly this album deserves more attention if not the film. It's good to see melody reigning supreme once more, courtesy Anand Milind. Definitely a big thumbs up to the music of "Tum Hi To Ho".

ADVERTISEMENT
This page was tagged for
Tum Hi To Ho hindi movie
Tum Hi To Ho reviews
release date
theatres list
Follow @fullhyderabad
Follow fullhyd.com on
About Hyderabad
The Hyderabad Community
Improve fullhyd.com
More
Our Other Local Guides
Our other sites
© Copyright 1999-2009 LRR Technologies (Hyderabad), Pvt Ltd. All rights reserved. fullhyd, fullhyderabad, Welcome To The Neighbourhood are trademarks of LRR Technologies (Hyderabad) Pvt Ltd. The textual, graphic, audio and audiovisual material in this site is protected by copyright law. You may not copy, distribute, or use this material except as necessary for your personal, non-commercial use. Any trademarks are the properties of their respective owners. More on Hyderabad, India. Jobs in Hyderabad.