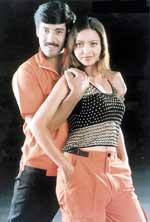 E M Bhargava / fullhyd.com
EDITOR RATING
6.0
Performances
Script
Music/Soundtrack
Visuals
NA
NA
NA
NA
Suggestions
Can watch again
NA
Good for kids
NA
Good for dates
NA
Wait for OTT
NA
Whether it happens in real life or not, do-gooders in movies always get paid back in full, usually in the form of a good-looking woman or man, as relevant. Your crib then would be 2-fold: why don't you get such interesting opportunities for doing good, and why don't things work out so neatly when you are the protagonist. If it's of any consolation, we have the same cribs ourselves, and as solace, have chosen to stick to reviewing.

Anandam? Well, try and remember all the youth movies you have seen in the past few years starting from Toli Prema to Nuvve Kaavaali, take bits and pieces from all of these and toss them up in a bit of a story till they are all distributed evenly, garnish this with some good songs, and viola, you get this new dish... oops, movie, Anandam.

Now let me be fair - though the film reminds you of a lot of earlier movies, credit should be given to the director for treating the story with a lot of care (pardoning him a few unnecessary scenes) and for creating the feel good factor. The film certainly becomes worth a watch.

Kiran (Akash) and Aishwarya (Rekha) are neighbors from their childhood, have a strong bond of enmity and successfully abuse each other in some of the most innovative ways I have heard in the past few years. The time they are not at each other's throats is spent in thinking up schemes that would lead to the other's humiliation, and so the first half establishes itself with lot of fun and laughter.

The director realizes that he has to continue with the narrative, and so Aishwarya's father is transferred to a remote place near Vizag. Now the house that they reside in here happens to be the location of the suicide of Deepika (Tanu Rai), who, in a flashback, is shown as having misunderstood her lover and hence having resorted to such a ghastly measure.

But Aishwarya happens to chance upon an undelivered letter to Deepika sent by her lover Vamsi (Venkat), in which he expresses his eternal love for Deepika and wishes to hear the same from her. Not wanting to break Vamsi's heart, the do-gooder in Aishwarya replies to him impersonating as Deepika.

Now Vamsi meets with an accident and passes away, leaving with his friend Kiran a letter he wanted to post to Deepika. And so the do-gooder in Kiran makes him write as Vamsi to Deepika. And for quite some time this ghostwriting business continues without either Kiran or Aishwarya realizing the truth.

As the communication between the two increases, they decide that they ought to meet (both feel that it's time that the other knew the truth), and when they do, are amazed to find each other instead of some stranger. The confusion is cleared when the truth about the actual lovers is known. And as it happens, they fall in love with each other, and after some twists and jittery moments, finally come together.

Other than some really unnecessary scenes, the director sails a good ship. After a long time you witness a movie with a story that is adequately supported by screenplay and other technical components such as photography. One major relief is that the director has not attempted to make his hero a macho man who can bash up a dozen brawny looking goons, and sticks to keeping him just another layman, albeit a bit good-looking.

The actors play their roles quite well. The hero especially essays a very good portrayal, and the others are all fringe artists with roles that are of little or of no consequence. The comedy track begins on a good note but ends up being obscene and noisy, and that is the one drawback. The comedy should have been part of the main narrative rather than being a parallel track.

The music is one of the best things about the movie. Devi Sri Prasad has done very good job through some peppy numbers full of youthful exuberance that sort of remind you of your college life, and some romantic numbers as well when the need arises. Only, he could have done better by limiting the number of songs.

ADVERTISEMENT
This page was tagged for
anandam old telugu movie review
Aanandam telugu movie
Aanandam reviews
release date
Akash, Rekha
Follow @fullhyderabad
Follow fullhyd.com on
About Hyderabad
The Hyderabad Community
Improve fullhyd.com
More
Our Other Local Guides
Our other sites
© Copyright 1999-2009 LRR Technologies (Hyderabad), Pvt Ltd. All rights reserved. fullhyd, fullhyderabad, Welcome To The Neighbourhood are trademarks of LRR Technologies (Hyderabad) Pvt Ltd. The textual, graphic, audio and audiovisual material in this site is protected by copyright law. You may not copy, distribute, or use this material except as necessary for your personal, non-commercial use. Any trademarks are the properties of their respective owners. More on Hyderabad, India. Jobs in Hyderabad.