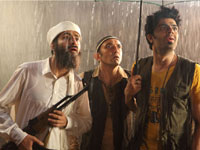 Zehra Abbas / fullhyd.com
EDITOR RATING
3.0
Performances
Script
Music/Soundtrack
Visuals
4.0
3.0
5.0
6.0
Suggestions
Can watch again
No
Good for kids
Yes
Good for dates
No
Wait for OTT
Yes
Tere Bin Laden: Dead or Alive opens with Sharma (Manish Paul) being anointed with the oils of his halwai dad's famous jalebis. Sharma wears a shirt that reads "ullu da pattha", and he widens his eyes appropriately enough at the bright orange sweets floating in a sea of fat - they symbolize the life he longs to escape. Sharma soon abandons his father's halwai business and moves to Mumbai to pursue his film-directing aspirations, but only to be confronted by problems as convoluted as those confounded jalebis.

He runs into Paddi (Pradhuman Singh), a struggling folk musician, and more interestingly, an Osama look-alike. The writer/director Abhishek Sharma (also a Sharma, wink wink) then springs an interesting meta twist. Sharma and Paddi end up making the hugely successful Tere Bin Laden. But success eludes them since the limelight is hijacked by the film's lead actor, Ali Zafar (in a too-short guest appearance). So they pin all their hopes on a sequel, but this plan, too, is scuppered by one tiny development - Osama Bin Laden's death in Abbottabad.

Unfortunately for Sharma and Paddi, Bollywood turns its back on them, but the CIA and the Harkat-e-Mansha develop a keen interest in their very particular skill set. The former wants them to create "proof" of Osama's death so that a rather neurotic President Obama can be re-elected, while the latter want to fool the world into believing that Bin Laden is still alive. What's that saying about being caught between a rock and a hard place?

Sure, the premise of Tere Bin Laden: Dead or Alive seems promising enough, but the treatment is not nearly as witty as the first outing, and far too indulgent with its run time, its repetitive plot loops, and the size of its cast.

The cast features an expected mix of new and old, but this recipe doesn't work too well. It's like cooking biryani with basmati rice that requires more ageing, and meat that isn't fresh enough. Manish Paul carries the curse of late night TV comedy in India - facial contortions, cannibalistic teeth-baring, and maniacal eye-widening. Pity, since he definitely has screen presence, but it needs to be freed from the clutches of his oily TV host persona.

Kher, who plays (drum roll) Agent David Chaddha, a CIA operative pretending to be a Punjabi film producer (eye roll), tries very, very hard. The result is a performance that stays with you but often teeters into such tremendous hamming that it almost justifies that cliché used by terrorists in the movie; the "American pig". Of course, we're going to throw a few dirty looks at the writers as well, who saddled him with strange gags, like a fake neck mole that functions as an accent modulator when it's twisted (and when it isn't falling off and ruining your appetite for popcorn).

Piyush Mishra seems to have had some premonition about his role as Khaleeli, the leader of Harkat-e-Mansha, when he offers "afeem" to his Bollywood guests - the guy knew he was going to be totally wasted. Incidentally, so are Mia Uyeda, playing Chaddha's vapid sidekick Junior, and Iman Crosson as Obama.

Pradhuman Singh is the funniest actor here, by far, but many people will struggle with his Punjabi dialogues (sans subtitles). As for the returning cast... we're not sure if there's any point in completing this sentence. Let's just say that considering their turn in the first film, they deserved a better deal.

Tere Bin Laden: Dead or Alive could have frankly done with fewer characters. There are just too many people running around, and after a point you start wishing that a stray bullet or two would drop a few of them. Abhishek Sharma must bear the onus of being too indulgent with the size of his cast, and also the duration of the film - it could have easily been 30 minutes shorter. An animation map that pops up every now and then to move the protagonist's car from location to location fails to hide the fact that the plot goes around in circles for a large part of the movie.

The film is ostensibly a satire, but the level of satire is rather juvenile, and the jokes are tired. Sample this - David's designation is Chief of Invasions, and he guffaws about his brainwave to create fictional weapons of mass destruction in order to invade Iraq. If that's clever, then the 11-year-old sitting next to your reviewer, picking his nose, was a genius.

Comparisons with the original are inevitable, and the makers of Tere Bin Laden: Dead or Alive seem to have capitulated well and truly to the pressure of market expectations. Tere Bin Laden, unsaddled by such baggage, had a freshness and verve that is sorely missing here. This sequel is like a jaded, too self-aware version of that spirited film.

The producers, the Shetty sisters, make a mute and spectacularly unfunny special appearance in the film. Sharma presents his idea for a film to them, and when they are intrigued, they slowly push a plate of Marie biscuits towards him. 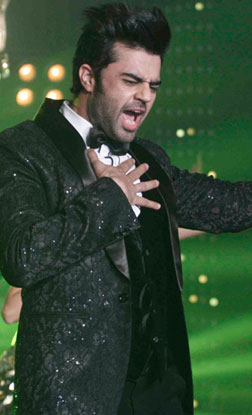 ADVERTISEMENT
This page was tagged for
Tere Bin Laden: Dead or Alive hindi movie
Tere Bin Laden: Dead or Alive reviews
release date
Manish Paul, Sikandar Kher
theatres list
Follow @fullhyderabad
Follow fullhyd.com on
About Hyderabad
The Hyderabad Community
Improve fullhyd.com
More
Our Other Local Guides
Our other sites
© Copyright 1999-2009 LRR Technologies (Hyderabad), Pvt Ltd. All rights reserved. fullhyd, fullhyderabad, Welcome To The Neighbourhood are trademarks of LRR Technologies (Hyderabad) Pvt Ltd. The textual, graphic, audio and audiovisual material in this site is protected by copyright law. You may not copy, distribute, or use this material except as necessary for your personal, non-commercial use. Any trademarks are the properties of their respective owners. More on Hyderabad, India. Jobs in Hyderabad.