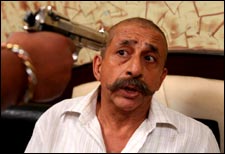 Nupur Barua / fullhyd.com
EDITOR RATING
5.0
Performances
Script
Music/Soundtrack
Visuals
4.0
3.0
4.0
5.0
Suggestions
Can watch again
No
Good for kids
No
Good for dates
No
Wait for OTT
No
For the average movie buff, the attraction towards a new release depends on its star cast. And that is the one, if not only, aspect that Chaalis Chauraasi has got working in its favour. That, and the promising (albeit, done to death) premise of a heist (which has become another word for a "comic caper"). A few laughs are always welcome, no matter how implausible the story.

Without going into details, suffice to say that they have their eyes on Rs. 20 crores, which they plan to acquire. For some reason, they decide to dress up as cops to do that, and jump into an adventure without any planning. Their problems begin when they become involved in an ongoing operation to nab a gangster.

So far, so good? Not really. To begin with, it is all supposed to happen one night, and the director yo-yos between trying to keep the long night interesting, and then changing his mind to insert irrelevant flashbacks of the characters. The setting-up takes a while, and a few yawns later, the main movie begins.

It is not always easy to sustain a comedy, and Hriday Shetty cannot be blamed entirely. The screenplay and the dialogues become repetitive after a point, and awkward pauses and transitions are covered up by unintelligent slapstick. No smart bantering and absolutely no quick-witted one-liners.

What is unfortunate is that the movie has all the right ingredients to become a clever comedy. Like the 4 men in the movie, the makers seem to set out to make a killing, but realise much later that the ensuing chaos is a result of their mismanagement and lack of development.

The one feature Shetty gets right, however, is the Mumbai setting. The photography does justice to the mean streets of the city at night. Add to that a dash of rain, and you are good to go.

The police van, licence plate 4084, that the goons roam around in, is another character in the film, and is as much a part of the city's nightlife as the pimps and criminals. Now if only the music had as much impact!

Once it is established that the plot points are weak and the story is predictable, the best thing to do is sit and watch the actors. And you will not be disappointed. Each and every one of them, from the leading four men to the one-sequence characters, has done a tremendous job. While the Shweta Bhardwaj track seems a little forced, her presence in a male-dominated movie offers the much-needed distraction.

Naseerudin Shah is as much at ease with his character as a chauffeur, as he is with his Professor avatar. It is this versatility that makes the movie worth watching.

The others are not to be undermined - Kay Kay Menon is terrific with his blank, confused expressions, Atul Kulkarni makes a great lecher, and Ravi Kissen is almost believable as a Kannadiga. All of them seem completely at home with the farcical and preposterous mess that goes around them, and, as an ensemble cast, they look their parts and have great chemistry.

Of course, the movie is also a comment on the society that we live in today, and the scams and corruption that we turn a blind eye to. Despite the ludicrous slip-ups, such as the presence of only two guards for Rs. 20 crores, and Ravi Kissen's mixed accent of no particular origin, there is a lot that you can identify with and relate to, and you may just wonder, in between laughs, how it is that we let the world turn into what it is today.
Share. Save. Connect.
Tweet
CHAALIS CHAURAASI SNAPSHOT

ADVERTISEMENT
This page was tagged for
Chaalis Chauraasi hindi movie
Chaalis Chauraasi reviews
release date
Naseerudin Shah, Atul Kulkarni
theatres list
Follow @fullhyderabad
Follow fullhyd.com on
About Hyderabad
The Hyderabad Community
Improve fullhyd.com
More
Our Other Local Guides
Our other sites
© Copyright 1999-2009 LRR Technologies (Hyderabad), Pvt Ltd. All rights reserved. fullhyd, fullhyderabad, Welcome To The Neighbourhood are trademarks of LRR Technologies (Hyderabad) Pvt Ltd. The textual, graphic, audio and audiovisual material in this site is protected by copyright law. You may not copy, distribute, or use this material except as necessary for your personal, non-commercial use. Any trademarks are the properties of their respective owners. More on Hyderabad, India. Jobs in Hyderabad.