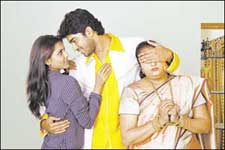 EDITOR RATING
3.0
Performances
Script
Music/Soundtrack
Visuals
NA
NA
NA
NA
Suggestions
Can watch again
NA
Good for kids
NA
Good for dates
NA
Wait to rent it
NA
There are 2 ways to tell your kids to cross the road carefully. One is to tell them how being careless can result in getting hit by a truck. The second is to actually get hit by a truck and show them. Kithakithalu is EVV’s way of doing the latter. A movie with a one-line message – that everyone cannot get a wife who looks like a movie heroine – takes over 2 hours and 30 minutes (and with no songs, mind you). When he could have just taken a newspaper ad saying that.

Okay, it can be argued that it’s not the message that is the purpose of the film, but the entertainment in the process. Unfortunately, EVV makes some fundamental errors even in that.

Firstly, the film has no glamour at all – there’s no heroine. Secondly, for most Indian masses, a movie is an escape into a fantasy world where the hero gets the ultimate reward in the end – the beautiful girl. In Kithakithalu, the hero is married to an obese ungainly woman halfway through, and there’s nothing to look forward to either for him or for you thereon. And thirdly, the days of the Rajendra Prasad genre of pure comic capers are gone – you like to watch them at home on TV, not in a movie theater.

Kithakithalu is about a young SI Raja Babu (Aryan Naresh) who has to marry a fat unsightly girl Soundarya (Geeta Singh) totally against his wishes, since his family, enamoured of the wealth of her family, threatens him with mass suicide if he doesn’t. He continuously insults Soundarya for her looks and weight, even though she is the model wife who respects him, is eager to please him, and defends him in front of the world despite everything.

Raja tries to court the beautiful Rambha (Madhu Shalini), who reciprocates his interest initially even though she knows that he is married. But when she finds out that all his wealth belongs to his wife and will go when he divorces her, she dumps him. Raja is then continuously slighted by Soundarya too after he tells her he wants to divorce her, and, faced with complete indifference and taunts from the very woman for whom he was the center of the universe until then, he changes, and wants her back.

The main attraction in the film is the comedy – this one features the entire pantheon of Tollywood’s comic gods, and there’s a fair bit of genuine rib-ticklers. However, the main theme is too much of a reality check to make this work.

Then, the women audiences could have got the men in to make the counters jingle, but then EVV signs off saying that men will be men, and that they can fantasize about the models and heroines but should stick to their wives. Dunno how many women will recommend to others, a film that ends like this. So that’s EVV’s primary forte – the families – going south.

The primary idea behind the film is easy to see – no one else at this time will make films with EVV’s sons, and EVV can only make low-budget family films starring mainly the comic crew. Unfortunately, there seems to be no market for either. This is a film strictly for the B and C centers.
Share. Save. Connect.
Tweet
KITHA KITHALU SNAPSHOT

See Kitha Kithalu full details
KITHA KITHALU USER REVIEWS
1 - 4 OF 4 COMMENTS
POSITIVE  |  NEGATIVE |  NEWEST  |  OLDEST  |  MOST HELPFUL  |  LEAST HELPFUL
USER RATING
6.1
29 USERS
Performances
Script
Music/Soundtrack
Visuals
NA
NA
NA
NA
Can watch again - NA
Good for kids - NA
Good for dates - NA
Wait to rent it - NA
Saradhi on 30th May 2006, 12:24pm | Permalink
Not a bad movie. Definitely better than evadigola vaadide. Comedy in the first half is good. But not up to the mark.
RATING
6
HARISH G on 26th May 2006, 9:53pm | Permalink
SO, U'RE GONNA RATE 1.5 STAR FOR A MOVIE WHICH FARES WELL AT B AND C CENTRES. ISN'T THIS DEGRADING THE B AND C? REVIEWER, PLZZ MIND THAT 99% OF THE AUDIENCE BELONG TO B AND C. U AND VERY VERY FEW BELONG TO A. FULLHYD.COM, PLZZ GIVE THE JOB OF REVIEWING TO B AND C, WHO HAS LIKE INTERESTS AS US. IF U CATER TO "A" AUDIENCE,PLZZ UNDERSTAND THAT U R RESTRICTING URSELF TO THAT 1 PERCENT OF AUDIENCE.
RATING
10
Ram on 12th May 2006, 4:40pm | Permalink
Good comedy
RATING
6
Kris Ray on 10th May 2006, 8:00pm | Permalink
Yes, the reviewer is right. There are no film makers in this world who could dare to make a film with either of EVV's Sons. Aryan is a pain to watch as an actor, as a dancer, as a fighter, as a .... He is not even fit to play the role of a road-side begger with a 2-seconds appearence on the screen. However, Naresh is a better actor - we have seen his acting skills in "Nenu". In fact, that film appealed because the role demanded such an ugly-looking guy as the lead. This should make it clear to Naresh as to what his 'face-value' is. If, he forgets this and tries to play the role of a handsome hero, he will only end up making a fool of himself. In fact, the very fact that not even one FullHyd reader bothered to comment on the review or the film stands testimony as to how far this man is a hero. So, here is a piece of advice for Naresh - take up roles that suit your face. Stop imagining yourself as a superhero over whom all pretty heroins will become fida... Pl. pass on this message to your father too.
RATING
2
LEAVE A COMMENT
fullhyd.com has 700,000+ monthly visits. Tell Hyderabad what you feel about Kitha Kithalu!
MORE MOVIES
Latest Reviews
Akshara
April 28th Em Jarigindi
Check
Pogaru (Telugu)
Naandhi
more
Kapatadhaari
Chakra
Chakra (Tamil)
Uppena
Zombie Reddy
G-Zombie
30 Rojullo Preminchadam Ela
Jai Sena
Bangaru Bullodu
Madam Chief Minister
Contemporary Reviews
Chup Chup Ke
Maa Tujhe Salaam
Mission Impossible 3
Guest House
Nijam
more
Chenna Kesava Reddy
Idiot
Something Special
Poseidon
The Devil Wears Prada
V For Vendetta
Harry Potter And The Goblet ...
Tom Dick And Harry
Khatron Ke Khiladi
Random Reviews
Sahasanari Narabhakshakulu
Family Circus
Chukkallo Chandrudu
Maha
36 China Town
more
Resident Evil: Extinction
Gentleman
Mangala
Journey 2: The Mysterious Is...
Oz The Great And Powerful (3...
Minugurulu
Chinnadana Nee Kosam
Sardaar Gabbar Singh
The Lego Ninjago Movie
The Curse Of The Weeping Wom...
SEARCH MOVIES
Dissatisfied with the results? Report a problem or error, or add a listing.
ADVERTISEMENT
SHOUTBOX!
{{todo.name}}
{{todo.date}}
[
ip{{todo.ip}}
]
{{ todo.summary }}... expand »
{{ todo.text }} « collapse
First  |  Prev  |   1   2  3  {{current_page-1}}  {{current_page}}  {{current_page+1}}  {{last_page-2}}  {{last_page-1}}  {{last_page}}   |  Next  |  Last
{{todos[0].name}}

ADVERTISEMENT
This page was tagged for
KITHA
Kitha Kithalu telugu movie
Kitha Kithalu reviews
release date
Aryan Naresh, Geeta Singh
Follow @fullhyderabad
Follow fullhyd.com on
About Hyderabad
The Hyderabad Community
Improve fullhyd.com
More
Our Other Local Guides
Our other sites
© Copyright 1999-2009 LRR Technologies (Hyderabad), Pvt Ltd. All rights reserved. fullhyd, fullhyderabad, Welcome To The Neighbourhood are trademarks of LRR Technologies (Hyderabad) Pvt Ltd. The textual, graphic, audio and audiovisual material in this site is protected by copyright law. You may not copy, distribute, or use this material except as necessary for your personal, non-commercial use. Any trademarks are the properties of their respective owners. More on Hyderabad, India. Jobs in Hyderabad.