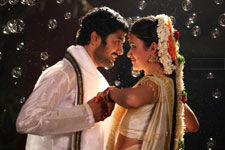 Ravi Kandala / fullhyd.com
EDITOR RATING
5.5
Performances
Script
Music/Soundtrack
Visuals
6.0
5.0
5.0
6.0
Suggestions
Can watch again
No
Good for kids
No
Good for dates
No
Wait to rent it
No
Allow us to warn the feminists first - Ala Ela is a movie that you may want to stay far away from. And if jokes about married men suffering at the hands of their wives irk you, it might even be the worst cinematic choice you could make in the decade, with writer-director Aneesh Krishna being on top of your hit list for the foreseeable future.

On the other hand, if you don't mind these and even think they are largely fun - jokes made because they have to be made and not because they are true or applicable - Ala Ela is surely a good choice. A large part of the film runs on the all-married-men-are-miserable premise, and Vennela Kishore is the perfect choice to play the cuckolded husband.

Pity we can't say the same about the wife - Bhanusree Mehra, who made a much hyped debut with Varudu, doesn't create much of an impression, and her dialogues all seem like they were added as afterthoughts during the dubbing.

The topic of dubbing brings us to another important aspect. When you have two girls wooing the hero in a movie starring Rahul Ravindran, and one's voice is dubbed by Chinmayi (the voice of Samantha), it kind of kills the suspense, no?

Anyway, Ala Ela is the story of Karthik (Rahul Ravindran), a guy who supposedly works in some company in Hyderabad. He spends most of his time hanging out with his pals Keerthan (Vennela Kishore) and Kalyan (Shaani). When his dying grandfather asks him to get married to a girl of the former's choice choice (also informing him helpfully that the girl's father is willing to give him property worth Rs. 2 crores) Karthik takes one look at the girl's pic and says yes. He also utters the following line: such a good-looking girl with such a lovely package, who will say no?

He then decides to take his friends along to the village where the girl lives, meet the girl and make her fall in love, and then get married to her. His travails during the journey and how he gets married to the girl of his choice form the rest of the flick.

As mentioned earlier, Ala Ela coasts along wonderfully well on some good performances by Vennela Kishore, Rahul and Shaani. The female leads are a huge disappointment - both of them make do with posturing in the place of acting. The writing is light (while not being fresh) and the one-liners work to a large extent.

The laughs are plentiful and keep the movie going through the climax. Director Aneesh Krishna has his heart in the right place. He only needs to learn that some stuff that seems wildly funny on paper might not necessarily be as funny on screen, and needs to be cut before it seems stretched.

The technical values are good and the small budget was obviously put to very good use. Ala Ela is a fun ride, and even if you don't laugh out at all the places that the actors do, the film will tickle you enough for you to come out with a smile. Now how often do we get to say that?
Share. Save. Connect.
Tweet
ALA ELA SNAPSHOT 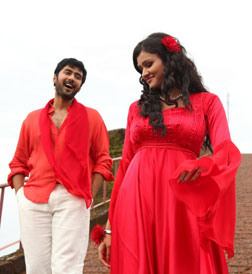 ADVERTISEMENT
This page was tagged for
ala ela full movie watch online
ala ela movie streaming
ala ila telugu full movie
ala ela full movie
ala ela movie watch online
Follow @fullhyderabad
Follow fullhyd.com on
About Hyderabad
The Hyderabad Community
Improve fullhyd.com
More
Our Other Local Guides
Our other sites
© Copyright 1999-2009 LRR Technologies (Hyderabad), Pvt Ltd. All rights reserved. fullhyd, fullhyderabad, Welcome To The Neighbourhood are trademarks of LRR Technologies (Hyderabad) Pvt Ltd. The textual, graphic, audio and audiovisual material in this site is protected by copyright law. You may not copy, distribute, or use this material except as necessary for your personal, non-commercial use. Any trademarks are the properties of their respective owners. More on Hyderabad, India. Jobs in Hyderabad.