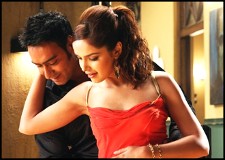 Kakoli Mukherjee / fullhyd.com
EDITOR RATING
6.0
Performances
Script
Music/Soundtrack
Visuals
7.0
5.5
8.0
6.0
Suggestions
Can watch again
Yes
Good for kids
No
Good for dates
Yes
Wait to rent it
No
The heart has reasons reason cannot know, it is said. And Madhur Bhandarkar uses this thread to spin the stories of three men who follow the whims and follies of their hearts with their different takes on love. Romantic comedy Dil To Baccha Hain Ji does not have jokes that will make you laugh your guts out, but does manage to put a smug smile on your face as you follow the antics of its love-struck protagonists, who surge ahead following their hearts despite 'Danger Ahead' signs looming large.

Dil To Baccha Hai Ji depicts the parallel love stories of three men who share a house - Naren Ahuja (Ajay Devgan), Milind Kelkar (Omi Vaidya) and Abhay Suri (Emraan Hashmi). Naren is a middle-aged banker who is going through a divorce, Milind works in a match-making agency and writes trashy poems in his leisure time, and Abhay is a skirt-chasing gym-trainer whose bills are paid by the women he sleeps around with.

Their lives are turned upside down when Cupid strikes, and they leave no stone unturned to woo their love interests. While Naren preens and polishes himself to be 'cool' and be a part of the gang of the pretty, young intern June Pinto (Shazahn Padamsee), Milind allows himself to be used by radio jockey and wannabe actress Gungun (Shraddha Das) to pay for her drinks and photo-shoot. Abhay, meanwhile, finds himself at a dead-end when he falls in love with Nikki Narang (Shruti Hassan) while being a boy toy for her lonely stepmother, Anushka (Tisca Chopra).

Madhur Bhandarkar, who has carved for himself a niche in reality cinema by giving hits like Page 3 and Fashion, does not finish with a superlative product in comedy. The jokes are quite commonplace, and the pace slackens at times. The presence of cliched comic props like a gay man with exaggerated expressions can annoy you a wee bit, and a few naive dialogues to throw in sexual innuendos seem contrived. And some scenes are way out of whack - for example, which intern would ask her boss of a few days when he lost his "V" (virginity), however nice the boss might be to her? Also, it is not clear why the Casanova Abhay suddenly discovers true love in Nikki.

A saving grace, however, is the unpredictable ending that saves the film from falling into the league of ordinary, run-of-the-mill love stories.

A scoring point for the film are the performances by the able cast. Ajay Devgan, with his laconic humour and apt comic-timing, endears himself to the audience as the man going through a mid-life crisis. Omi Vaidya does well in his comfort zone with his trademark diction, but runs the risk of being typecast in the Chatur Mahalingam genre if he does not try anything new the next time. Emraan Hashmi has done the bad boy-turning-good act in many films now, and delivers a decent performance.

The leading ladies, too, do justice to their roles. Shazahn embodies the cuteness and vulnerability of a pretty young thing well, and Shraddha Das looks good as the spunky RJ. Tisca Chopra, who has a very limited screen time, puts up a mature performance. But Shruti Hassan, even in her miniscule rule, hams all the way with abysmal dialogue-delivery and frozen expressions.

The music, like the movie itself, is light and breezy, and the number by Mohit Chauhan stays on with you long after the closing credits roll.

With this weekend having nothing much to offer, Dil To Baccha Hai Ji can be worth giving a shot. Just don't set your expectations too high.