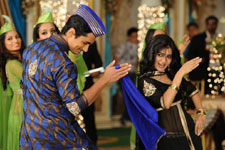 Kritika Deval / fullhyd.com
EDITOR RATING
4.0
Performances
Script
Music/Soundtrack
Visuals
5.0
4.5
6.0
6.5
Suggestions
Can watch again
No
Good for kids
Yes
Good for dates
Yes
Wait for OTT
Yes
If you hear things crashing and breaking in the background, that, dear readers, is the din of our crash-landing expectations, the ones that started off on a nose-dive into Scylla the moment Bairraju (Siddharth) appears on screen with his overblown son-of-Telangana-soil accent, followed by the screechy, uber urban (and mostly incomprehensible) Shreya (Samantha).

For, this writer, just like thousands of others who thronged the movie halls today, fully expected to enjoy Jabardasth, which is the second offering from a director whose first film was delightful on all counts.

What she got, instead, is a watered-down, Telugu-fied caricature of Band Baaja Barat.

And, so, you have Jabardasth - the story of how Bairraju and Shreya start their own event management company, make it a runaway success, get entangled in cross-wired emotions, go their separate ways and start their own companies, fail miserably, come back together, and, finally (much to the relief of the audiences who by this point are straining at their bits) fumble their way along to a happy ending that, while expected, doesn't quite seem to fit.

Whoa! Deja vu, huh? And, that too with reports of actor Nani's "official" remake of BBB doing the rounds! Not cool, Nandini Reddy.

So, what is wrong with this "freemake"?

While BBB didn't exactly rock the world of cinema, it had one thing going for it - this amazing chemistry between its lead pair. The characters of Bairraju and Shreya, however, not the most appealing characters to begin with, seem to bring out each others' most annoying best.

The dialogue between them is mostly uncomfortable, the humour forced, and the whole thing is only worsened by the OTT performances Siddharth and Samantha seem to think was required of them.

They have their moments, mostly thanks to those rare moments when Reddy seemed to have remembered that she could, indeed, write.

Post the interval, the movie picks up for a while when Nithya Menen shows up like a much-needed breath of fresh air, giving you the most enjoyable half hour or so in what is otherwise an interminable drag.

In fact, the supporting cast, comprising Sri Hari, Vennela Kishore, Tagubothu Ramesh, Sayaji Shinde, and the delightful woman-child that is Menen, are what save the film from being a complete dud.

Srihari, as an underworld don "hiding" away in Malaysia, is perfect as always in his standard role of the formidable big brother.

Samantha is looks tired, and acts as if she just wants to get the whole thing done with. Siddharth is at his best when he unconsciously loses his super-forced rural accent.

Sayaji Shinde, as a Bihari out for Bairreddy's blood, is pretty funny, in a slipping-on-a-banana-peel way.

The bottomline, though, is that Nandini Reddy is capable of making banana-peel-humour seem classy, and that is almost entirely missing here.

The music is pretty good, but it would be better if it weren't set in a movie that had its viewers either getting up and walking off, or looking at their watches once every five minutes.

The cinematography is quite spiffy throughout. The editor, though, could've used his scissors a lot less sparingly.

The verdict: If you're looking for a fresh, funny romance to lighten your heart and brighten your day, this is not it.
Share. Save. Connect.
Tweet
JABARDASTH SNAPSHOT 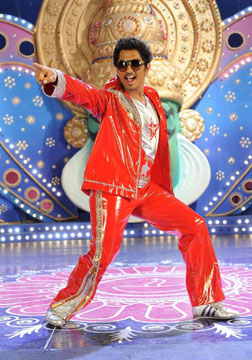 ADVERTISEMENT
This page was tagged for
Jabardasth telugu movie
Jabardasth reviews
release date
Siddharth, Samantha
theatres list
Follow @fullhyderabad
Follow fullhyd.com on
About Hyderabad
The Hyderabad Community
Improve fullhyd.com
More
Our Other Local Guides
Our other sites
© Copyright 1999-2009 LRR Technologies (Hyderabad), Pvt Ltd. All rights reserved. fullhyd, fullhyderabad, Welcome To The Neighbourhood are trademarks of LRR Technologies (Hyderabad) Pvt Ltd. The textual, graphic, audio and audiovisual material in this site is protected by copyright law. You may not copy, distribute, or use this material except as necessary for your personal, non-commercial use. Any trademarks are the properties of their respective owners. More on Hyderabad, India. Jobs in Hyderabad.