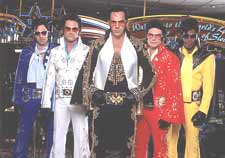 Smriti Kashyap / fullhyd.com
EDITOR RATING
1.0
Performances
Script
Music/Soundtrack
Visuals
NA
NA
NA
NA
Suggestions
Can watch again
NA
Good for kids
NA
Good for dates
NA
Wait for OTT
NA
You know you are in trouble when you begin to see about 1,000 Elvis impersonators strutting about across the screen and you're already looking at your watch as the credits start to roll. Well, what can I say, except good gawrsh, not again? This movie has more Elvis apes than working brain cells.

If you're like Elvis who, then do yourself and the rest of humanity a favor by staying put at home. But then again if you're like Elvis, ah, then do yourself a bigger favor and stick around at home. 3,000 Miles... is an attempt at serious filmmaking by a director who doesn't seem to know the difference between his elbow and his ass. It's a pokey story of a posse of ex-cons led by once-upon-a-time Kevin Costner as they plan to loot a casino during an annual Elvis convention. They want to clear the safe of its contents, and hence the whole Elvis garb and garbage.

Murphy (Costner) is the hard-boiled egg who's leading the heist, Michael (Kurt Russell) is the one who's programmed with a superior conscience, and Christian Slater and the rest of the actors just tag along for kicks. And the rest of the movie is peppered with plots and chunky, jangly sub-plots and clichés that you can smell from 3,000 miles away.

There's loot to be looted, people to double cross and sideburns to fertilize, and all the while the film's struggling with the excess baggage of a tedious subplot - a dumb love twist in the form of Russell's Lord-knows-what Courtney Cox, and her 11-year-old. Write to me if you can figure out what the hell that was all about. Anyway, Cox (Monica of 'Friends') looks like she's just missed her appointment for her facelift. What's Kevin Costner's excuse for doing a flick like this? Why can't he stick to the hills and clear Hollywood of his wooden almost-toxic presence? He can't act for all the weeds in the world.

The movie sucks - but there's enough action if you're generally looking for some blind-on random killings, guts and gore. The flick goes from militarily offensive stupid to plain mind numbingly dumb in 3 nano seconds flat, real time. The brutality is the sorts that would make Hannibal seem like a pussycat stuck on a rose bush.

Well, all I can say is that I regard this flick as a public calamity and I fear it will be viewed in no other light but that throughout Hyd and Sec. If you do want to see it, take along a wooden mallet and some nails... it completes the masochistic fetish.
Share. Save. Connect.
Tweet
3000 MILES TO GRACELAND SNAPSHOT

ADVERTISEMENT
This page was tagged for
3000 Miles To Graceland english movie
3000 Miles To Graceland reviews
release date
Kurt Russell, Kevin Costner
theatres list
Follow @fullhyderabad
Follow fullhyd.com on
About Hyderabad
The Hyderabad Community
Improve fullhyd.com
More
Our Other Local Guides
Our other sites
© Copyright 1999-2009 LRR Technologies (Hyderabad), Pvt Ltd. All rights reserved. fullhyd, fullhyderabad, Welcome To The Neighbourhood are trademarks of LRR Technologies (Hyderabad) Pvt Ltd. The textual, graphic, audio and audiovisual material in this site is protected by copyright law. You may not copy, distribute, or use this material except as necessary for your personal, non-commercial use. Any trademarks are the properties of their respective owners. More on Hyderabad, India. Jobs in Hyderabad.