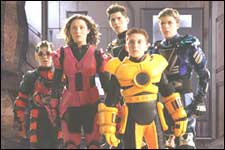 Neha Tejuja / fullhyd.com
EDITOR RATING
6.0
Performances
Script
Music/Soundtrack
Visuals
NA
NA
NA
NA
Suggestions
Can watch again
NA
Good for kids
NA
Good for dates
NA
Wait for OTT
NA
What Spy Kids 3D lacks in content, it compensates for by adding another dimension. Yes, this, as the name very explicitly suggests, is a 3D movie. And a 3D movie is something you cannot go wrong with. Even if you try. And try they did. For a good hour and a half.

Spy Kids 3D: Game Over takes off where Spy Kids 2 left us. At young Juni Cortez (Daryl Sabara). This 11-year-old boy has quit the secret spy service that he and his entire family work for. Can't blame him. You would, too, if you were made to wear that tight wet suit that won't allow an ounce of puberty to kick in. That, and the fact that Juni is disgruntled with the ways of the agency.

So, Juni is now living a normal ordinary life. Normal includes video conferencing with the President of the US (who uncannily is Georgie boy himself - George Clooney, that is), living with no parental supervision whatsoever, and with a gazillion gizmos and gadgets at his beck and call.

The boy is hounded day in and day out by the President and the agency to return to the ranks. But a stubborn Juni will not. Until his sister, Carmen (Alexa Vega) needs his help. She is trapped on the last but one level of a virtual reality game, and the only one who can rescue her is her little bro.

The game in question is called Game Over, and is the brainchild of Sebastian, aka the Toymaker (Sylvester Stallone). The Toymaker deviously plans to take over the world with this. Everyone who reaches the final level of the game is mentally trapped in there, and the Toymaker takes over their brain from there on.

Juni enters the game. Your cue to put on your 3D glasses, which are extremely flimsy pieces of plastic that refuse to stay on your nose, and, owing to some strange trait, will not tuck behind your ears. The trick to keeping them on is to tilt your neck all the way back and sink really low in your seat to avoid getting a crick in the neck. A slip-disc is something more manageable.

Now Juni jumps from the gadget-happy espionage world to the 3D world. This is where the crux of the movie lies. And he calls in his paralysed grandfather (Ricardo Montalban) to use as a lifeline. And together, with the help of a few other teens, they have to rescue Carmen, reach Level 5, shut down the game and race against time.

You would expect some kickass adventure and objects zooming in and out of your face any minute. Unfortunately, that never happens. Then you remove your 3D glasses, wipe them clean, and put them on again. Still nothing. You go out and buy another pair. Still nothing. And as the initial squeals and shrieks from the single-digit age audience also die down, you know even they know it now.

Although the movie lacks any kind of outright thrills, it is a barrel of fun for the younger crowds. Because of the pixilated 3-dimensional world, the movie lacks color as well. Robot fights, bike races, frogs on pogo sticks, metallic man-eating toys, volcanoes and lava contribute to the action of the film. Screws, nuts and bolts are the only things that come the audience's way.

Spy Kids 3D also has cameo appearances by the rest of the Cortez family - Antonio Banderas, Carla Gugino and Holland Taylor, who come in at the fag end of the flick to save the day. Don't walk into the movie expecting a Chota Chetan to happen. And if you do not want the attention of your kids to sway from the screen, don't buy them any popcorn or Coke.
Share. Save. Connect.
Tweet
SPY KIDS 3D -... SNAPSHOT
SPY KIDS 3D - GAME OVER SNAPSHOT

ADVERTISEMENT
This page was tagged for
Spy Kids 3D - Game Over english movie
Spy Kids 3D - Game Over reviews
release date
Daryl Sabara, Alexa Vega
theatres list
Follow @fullhyderabad
Follow fullhyd.com on
About Hyderabad
The Hyderabad Community
Improve fullhyd.com
More
Our Other Local Guides
Our other sites
© Copyright 1999-2009 LRR Technologies (Hyderabad), Pvt Ltd. All rights reserved. fullhyd, fullhyderabad, Welcome To The Neighbourhood are trademarks of LRR Technologies (Hyderabad) Pvt Ltd. The textual, graphic, audio and audiovisual material in this site is protected by copyright law. You may not copy, distribute, or use this material except as necessary for your personal, non-commercial use. Any trademarks are the properties of their respective owners. More on Hyderabad, India. Jobs in Hyderabad.