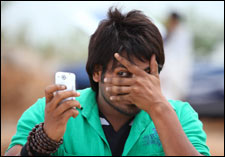 Deepa Garimella / fullhyd.com
EDITOR RATING
4.0
Performances
Script
Music/Soundtrack
Visuals
6.0
4.0
6.0
7.0
Suggestions
Can watch again
No
Good for kids
No
Good for dates
No
Wait to rent it
Yes
Mr. Nookayya is as earnestly packaged as a flash website for a campus festival, and has just as much depth. What could have been an edge-of-the-seat thriller falls significantly short of its promise, as it grapples with loose story-telling and loopholes.

The film cannot be faulted for being run-of-the-mill, as it conspicuously aspires to be offbeat even as it tries to play to the gallery. Only, a little smoothening around the edges would have gone a long way.

Manchu Manoj plays a loaf who calls himself Mr. Nokia, who, along with his sidekicks (Vennela Kishore and Paruchuri), is a crackerjack mobile phone thief. In a parallel story, a loving couple is torn apart when the husband, Kiran (Raja), is kidnapped. The wife Anu (Kriti Kharbanda) is threatened with a ransom call. What happens when the paths of Anu and Mr. Nokia meet? Will Anu get her husband back?

As it turns out, Mr. Nokia's cellphone-stealing expertise is simply a "thing" that the character has - it doesn't contribute to the solution as much as it does to the problem. And there are some logical fallacies there, too. Mobile-snatchers are smart enough to throw the SIM card of a phone out, or at least switch the device off, soon after a theft. What, then, is Mr. Nokia doing answering calls from all the phones he has filched? Why is he even letting himself be traced by the MP whose mobile he's stolen?

Then, there are too many convenient coincidences in the story for you to take this whole thing seriously. A few of the plot twists do make you sit up and watch, but overall, the jigsaw is rather simplistic. In fact, the movie has a laughable climax, which doesn't even justify certain major things that happen during the course of the rest of the film.

And we guess we'll just stop cribbing about the bad language in Telugu films nowadays.

Manoj has the presence, but not the flair. His routine of mimicking other people's voices - including his dad's, of course - must go if he wants to take a few steps towards mature dialogue delivery. His boyish looks and his exuberance suit the character perfectly, though.

Vennela Kishore shines in the scenes that he's given. His comedy easily surpasses that of Brahmanandam, who appears in a lousy sequence in which he claims he's "22+" years old.

Murli Sharma seems to have taken delight in his role as the kidnapper. Quite refreshing indeed, to have a villain who dubs for himself. Raja looks out of action. Kriti Kharbanda is left weeping a lot and looking tired and, and Sana Khan is as stony as an "actress" can get. The women are a disappointment.

The graphic-novel-styled title montage is no red herring - the entire movie indeed has been shot pretty well, with the cinematographers going berserk with the action sequences. The action, by itself, has nothing novel in it, but all the fights have been consistently, and exasperatingly, shot in extreme slow-motion. In addition, the crew seems to have taken a fancy to splashy graphics, with drawings seeking to "enhance" the value of certain scenes.

The music is about all right, although it won't make you stop what you're doing to listen to it. The choreography isn't very exciting, though.

Mr. Nookayya fails to make an impact, and we don't think Nokia has anything to worry about. Head to this one only if you lack options.
Share. Save. Connect.
Tweet
MR. NOOKAYYA SNAPSHOT

ADVERTISEMENT
This page was tagged for
Mr. Nookayya telugu movie
Mr. Nookayya reviews
release date
Manchu Manoj, Kriti Kharbanda
theatres list
Follow @fullhyderabad
Follow fullhyd.com on
About Hyderabad
The Hyderabad Community
Improve fullhyd.com
More
Our Other Local Guides
Our other sites
© Copyright 1999-2009 LRR Technologies (Hyderabad), Pvt Ltd. All rights reserved. fullhyd, fullhyderabad, Welcome To The Neighbourhood are trademarks of LRR Technologies (Hyderabad) Pvt Ltd. The textual, graphic, audio and audiovisual material in this site is protected by copyright law. You may not copy, distribute, or use this material except as necessary for your personal, non-commercial use. Any trademarks are the properties of their respective owners. More on Hyderabad, India. Jobs in Hyderabad.