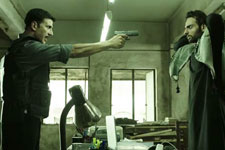 Nupur Barua / fullhyd.com
EDITOR RATING
8.0
Performances
Script
Music/Soundtrack
Visuals
8.0
7.0
5.0
8.0
Suggestions
Can watch again
Yes
Good for kids
No
Good for dates
No
Wait for OTT
No
Patriotism no longer means having to become a martyr for your country, at least as far as Neeraj Pandey is concerned. Patriotism, or new age patriotism to be more precise, is all about living for your country, so that you can die for it if necessary. And that is what the secret service officials in Baby are all about.

Baby is the code name for an Indian secret mission spanning five years. The aim of this operation is to flush out all national threats that come from Pakistan. It is now the last year of the mission, and Bilal (Kay Kay Menon), the deadly terrorist who resents the importance that 26/11 killer Kasab received in an Indian prison, has escaped.

In the meantime, across the border and across the seas, there is Maulana Mohammad Rahman (Rasheed Naaz), who tries to stir up gullible Muslims by telling them that India is a horrible place that has not given the Muslims their due. Case in point, he elaborates, is Kashmir. His followers are willing to lay down their lives to fight against India, and especially to spread terror.

In this chaos, the head of Baby, Firoz Ali Khan (Danny Dengzongpa), plans the direction the operation is going to take. His best officer is Ajay Singh Rajput (Akshay Kumar), whose own wife (Madhurima Tuli) has no idea what her husband's job entails. Ajay decides that the only way to curb the terror threat is to recapture Bilal, so that the anti-Indian agents do not take the country for granted.

And thus begins a chase that goes from India to Nepal to Turkey to Saudi Arabia, and a few other places in between. The plot thickens when the unlikely hacking expert Om Prakash Shukla (Anupam Kher) joins the team. The question now is this - how much are Ajay and his team of highly efficient officers willing to sacrifice to fulfil their mission, and how much of their modus operandi will be ethical?

It is a fine line between patriotism and delusions of grandeur, and this is where Neeraj Pandey scores. To know how much you can give up in the name of patriotism, you need to possess oodles of self-confidence, and all the characters have plenty of that. These are people who believe in their mission, and are cold-blooded about the necessity of killing. The script is not complicated by pseudo-psychology, and that is a relief. The script is structured such that you can take your time to analyse the situations that exist (both the fictitious and the real ones).

In fact, that is one of the bigger flaws of the movie - the uneven pacing of the story. While the first 15 minutes or so leave you breathless with anticipation, the energy of the narrative suddenly dips, and becomes too descriptive. The director feels the need to explain each and every aspect of his story, which is probably a good idea given how complicated spy games are, but makes the movie relatively lacklustre.

The second half, on the other hand, while on its way to wrap up all loose ends, becomes a roller-coaster ride of emotions and action. There is no time to look for flaws, and they anyway belong to the first half. Special mention must be made of the fight sequence that involves Ajay's female counterpart in Nepal. It is handled with extreme care and is most likely a very authentic representation of what goes on in the world of secret service officials.

There is the danger of jingoism in stories such as these, of course, and the dialogues do exhibit some, but it still seems very realistic. The screenplay does away with discrimination based on religion, but does take on the indifference that the Indian bureaucracy displays in matters related to the threat that the country is under. Also, Neeraj Pandey does the unthinkable - you become one with the characters, and their frustration and patriotic thoughts become yours. What is relevant is that the content is believable, given the times we live in, and nothing seems overly staged, despite the dramatic twists and turns and action sequences.

The one jarring bit is the romantic song, which is completely out of place in a background like this. The relationships between the colleagues and their seniors, and the relationship between Ajay and his wife, are portrayed very well, but the love and glamour angle seem slightly forced.

Akshay Kumar is the star in this movie, of course, and his stardom is glaringly obvious, even when he underplays his role. His chemistry with co-stars Danny Dengzongpa and Anupam Kher is the reason you should watch the film. Between the three of them, they keep you hooked to the plot. Dengzongpa also plays the role of the narrator, and Kher's quirkiness is a welcome relief from all the tension that the movie builds up.

Amongst the other actors, Tapsee Pannu is a delight. She show grit and determination not just in her role, but as an actor as well. You never tire of her. Rana Daggubati is the silent one, and that makes him intriguing. Kay Kay Menon plays out his part with an air of nonchalance, which is what his character probably demands. He is easily dislikeable, which is the whole idea. As for Rasheed Naaz - a Pakistani playing a Pakistani villain - his decision to accept this role is in itself a commendable act, and of course, he does full justice to it.

The setting is believable, too, and the production design does not gloss over minute details in the mundane existence of these officers. In an effort to make the story and the importance of the situation relevant to you, the makers shy away from over-glamourising the sets and locales. The cinematography captures this world in wonderful detail, and the action sequences, especially, are praiseworthy. It is a fast-paced thriller, especially in the second half, and there is very little that you can find fault with as far as the editing is concerned. The music is average, but this movie deserved some better songs.

Baby may not be the need of the hour, or it may just be what the country needs to snap out of its self-indulgent stupor and contribute to the nation's progress. Either way, it is a movie worth watching, for the content and the acting. Be prepared to be pepped after.
Share. Save. Connect.
Tweet
BABY (2015) SNAPSHOT 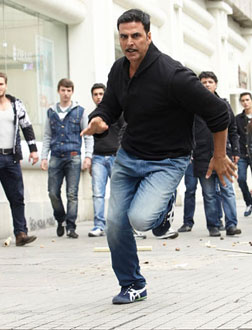 ADVERTISEMENT
This page was tagged for
Baby (2015) hindi movie
Baby (2015) reviews
release date
Akshay Kumar, Tapsee Pannu
theatres list
Follow @fullhyderabad
Follow fullhyd.com on
About Hyderabad
The Hyderabad Community
Improve fullhyd.com
More
Our Other Local Guides
Our other sites
© Copyright 1999-2009 LRR Technologies (Hyderabad), Pvt Ltd. All rights reserved. fullhyd, fullhyderabad, Welcome To The Neighbourhood are trademarks of LRR Technologies (Hyderabad) Pvt Ltd. The textual, graphic, audio and audiovisual material in this site is protected by copyright law. You may not copy, distribute, or use this material except as necessary for your personal, non-commercial use. Any trademarks are the properties of their respective owners. More on Hyderabad, India. Jobs in Hyderabad.