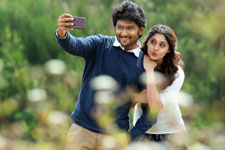 Rare thing #1: It bestows upon its heroine the supremely rare qualities for Telugu heroines - intelligence and independence. Now, ours is an industry which celebrates female dumbness and dependence (scratch that, it's called cuteness and delicateness around here). To take examples from recent big films, Samantha in A Aa, Samantha in Brahmotsavam, Rakul Preet in Naannaku Prematho, Rashi Khanna in Supreme, Lavanya Tripathi in Soggade... the list goes on.

In this prevailing context, Gentleman gives us a heroine who's a talented VFX artist who's sent to London on work concerns. And she has the nerve and gumption to make her own investigations when life hurls perplexing miseries at her. Unreal!

Rare thing #2: It actually casts an intelligent and confident actress in an intelligent and confident role. So this other common thing our films do is give the heroine an important career or mindset and make sure they cast an "actress" who'll decimate every last shred of doubt you might have about her lack of sensibility. Catherine Teresa was an MLA in Sarrainodu. Enough said.

Gentleman however casts Nivetha Thomas whose eyes do so much work it appears like she's trying to compensate for all the Aggarwals, Singhs, Khannas and Bhatias put together. We appreciate her even more when she shares screen space with Surbhi Puranik (who does some passable work but is by all means better off in a fairness cream advert). Thomas, who was previously seen in the Tamil version of Drushyam, holds her own and the film together as well in the portions where Nani necessarily has to lay low.

So the heroine is one exciting aspect about Gentleman. And there are other exciting things, too. Only, the script is not among them. Because this is a thriller whose resolution is clear when the twist is brought in (and for anyone who's watched the trailer, the twist itself is no surprise).

As you may be aware, the movie has two girls Catherine (Thomas) and Aishwarya (Surbhi) whose respective love interests look alike. Jairam (Nani) and Gautam (Nani) looking alike brings about certain complications which make for the suspense in the plot. But like we said, there isn't much suspense here. Barring the details, you can pretty much see what's going to happen like the movie shared its Google Calendar schedule with you. And that's bad news for a thriller.

What also doesn't work is the pacing. A long chunk of the film is spent on the cutesy romance (two romances in this case) which seems to go on as its own distinct film. Even when the thriller picks up, we have painfully dampening songs (we gather there are only four, but it feels like there are seven). All put together, it's safe to say that Gentleman fails as a thriller.

However, it doesn't fail as a film. Paradoxical as it may sound, Gentleman is a good film which happens to be a poor thriller.

Nani, for instance, brings so much energy to the proceedings. He isn't doing much that is different from what he did in earlier films but we certainly haven't tired of it. Humour-wise, his timing is perfect. Sometimes the joke sinks in a moment after it happens and you find yourself marvelling at the guy. In addition to his antics, his charm and his emoting warrant a viewing.

Mohankrishna Indraganti, too, establishes himself as a director to reckon with. Even when a script is poor, a good director manages to get you invested in the scenes. Indraganti has us involved at various parts of the film even if we couldn't have cared less for the story. This kind of work is a far cry from direction whose sole purpose is to mechanically mount the script on to celluloid.

Indeed, it is the little things. The reaction shots, the intercuts, the BGM (some nice work by Manisharma), the stray jokes, the quirky courtship (the Surbhi-Nani track is refreshing but unnecessarily protracted)... all of these make you stay and invest.

But what's the point if the thriller is not giving the unexpected, you ask? The point is the film gives you unexpectedly good quality where a lesser director would have given you a computer algorithm. Take the Vennela Kishore (who appears to be filling the vaccuum left by Sunil and Brahmanandam) track. He plays one of those cantankerous bosses whom the employees love to hate. A regular film's joke would just be that the employees and boss share a testy relationship, perhaps with some rubber-faced expressions by Brahmanandam. Over here, though, it is how the employees hate him (dialogues with some inventiveness in them) and how the boss harasses them (watch out for the hilaorious stretch with Satyam Rajesh on the use of letter x). We laughed out pretty loud.

It is treatment like this that sets Gentleman apart. Where much of the industry appears to believe that the film is finished the moment you have a script and a star, Indraganti seems to believe that's where the film actually starts to get shape. He's right, you know.
Share. Save. Connect.
Tweet
GENTLEMAN (2016) SNAPSHOT 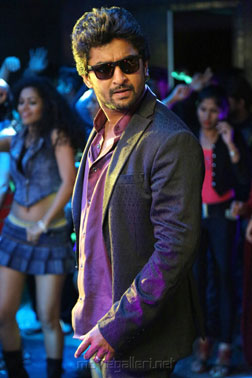 See Gentleman (2016) full details
GENTLEMAN (2016) USER REVIEWS
1 - 5 OF 5 COMMENTS
POSITIVE  |  NEGATIVE |  NEWEST  |  OLDEST  |  MOST HELPFUL  |  LEAST HELPFUL
Mungalla Krishna on 18th Jul 2016, 1:39pm | Permalink
Best Performance by Nani
funkycrsipy on 27th Jun 2016, 4:17pm | Permalink
Comedy, thriller, love story, romance, suspense all threads intertwined so beautifully and all converging to a fulfilling climax. How many movies we get to see these days which deals with so many tracks together and yet keeps audience equally glued to each thread? Add to it, 3 beautiful performances by all 3 leads, this deserves 8 stars on comparative basis. Note that I haven't watched any trailers or promotions before movie, might be the reason why I liked it more than Josh from suspense element perspective.

Nani owns "Natural Star" tag by his sheer performances alone, who acts with minimum effort and fuss but makes maximum impact. He is the most deserving star than all other stars who were born with silver spoons and inherited their star tags courtesy their families. And watch out for Nivetha who I think matched Nani shot for shot and delivered beautiful performance in almost all shots of hers, especially when her role involved going through all sorts of emotions. I seriously hope our so called star heroes and star directors don't spoil her and do injustice to her talent by taking her into meaning less, cutesy, dumb and skin show roles, let these roles be reserved for our STAR heroines.
Chaitu on 23rd Jun 2016, 5:04pm | Permalink
Correct review...for d first time in a suspense thriller, I was impressed by d treatment rather than d story
Kanye on 19th Jun 2016, 12:48am | Permalink
I've said a few times before that Samantha is the best of the current lot. But Niveda Thomas has really shone out and I hope that she doesn't choose silly acripts in the future.
Nani is awesome as always and Srinivas Avasarala gets a more substantial role *cough* A..Aa and Nannaku Prematho.
I also feel as if Indraganti redeemed himself after Bandipotu with this better treatment if his film.

ADVERTISEMENT
This page was tagged for
surbhi nani intelligent
gentleman 2016 movie
Gentleman 2016 film
Gentleman (2016) telugu movie
Gentleman (2016) reviews
Follow @fullhyderabad
Follow fullhyd.com on
About Hyderabad
The Hyderabad Community
Improve fullhyd.com
More
Our Other Local Guides
Our other sites
© Copyright 1999-2009 LRR Technologies (Hyderabad), Pvt Ltd. All rights reserved. fullhyd, fullhyderabad, Welcome To The Neighbourhood are trademarks of LRR Technologies (Hyderabad) Pvt Ltd. The textual, graphic, audio and audiovisual material in this site is protected by copyright law. You may not copy, distribute, or use this material except as necessary for your personal, non-commercial use. Any trademarks are the properties of their respective owners. More on Hyderabad, India. Jobs in Hyderabad.