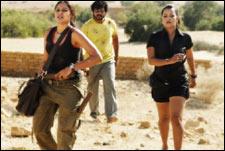 Deepa Garimella / fullhyd.com
EDITOR RATING
4.5
Performances
Script
Music/Soundtrack
Visuals
7.0
4.0
8.0
8.5
Suggestions
Can watch again
No
Good for kids
No
Good for dates
No
Wait for OTT
Yes
The reported 32 crores of rupees are right there in front of you - both in the technical departments and in the vision. Yet, Yuganiki Okkadu is a difficult film to sit through. Not because it is an idea that the makers couldn't handle, but because the idea itself wasn't fleshed out in a palatable direction.

One problem with Yuganiki Okkadu is the tendency to focus on the novel and turn it into the bizarre. The casualty of the endeavour thus turns out to be the soul of the movie - of a story that might well have been thrilling right till the end.

It's a different matter that the Cholas won't be mighty flattered with having the name of their dynasty be an umbrella term for a semi-civilized tribe hidden in the netherworlds of Vietnam after fleeing Tamil Nadu. Or that there are no explanations - not scientific, but at least, the folk myths - for several things that happen in the film.

In the 12th century, the Cholas, defeated by the Pandyas, fled to a place in present-day Vietnam, and were not heard of since. A government-backed exploration team sets out to find out about the lost 'civilization'. The team is a mixture of army men and unsuspecting coolies, and the latter were literally cheated into this expedition.

An archaeologist who had earlier gone to explore the mystery never returned. His daughter (Andrea Jeremiah) is part of the present team, led by Anitha (Reema Sen). The way forward is fraught with dangers - both of the natural kind as well as of the supernatural kind. So deadly luminous sea creatures and violently hissing snake legions compete with mysteriously disappearing quicksand pits in finishing off half the contingent. The rest of the story is all about how they confront the long-lost people.

Yuganiki Okkadu is a compelling watch in the first half, simply because of the fresh treatment. The Hollywood-style hunt excites you, and the exotic perils and the mosquitoes feel real. Characters start to develop while steering clear of stereotypes. Most important of all, there's the intrigue of what lies ahead. Given what you studied about these those powerhouse dynasties they keep mentioning, you expect drama, costumes, royalty. Maybe not reality, but elegant grandeur.

And all you get is a freak show.

The second half is mostly a blaze of violence and savagery - in a display that can only be called vulgar. An ancient tribe and its issues are juxtaposed with a plot of deceit and betrayal, and an alarmingly graphic celebration of death and destruction is both the means and the end to that part of the story.

Karthi, as an uncouth coolie in the expedition has a reasonably well-etched out character, and he's the most expressive in the cast. Reema Sen looks good but has no real scope for acting here. Andrea Jeremiah has a marginally better deal. A lot of the cast is alien to the Telugu audiences.

Visually, the work shows. The larger-than-life special effects are fascinating, helped along with a riveting soundtrack. The songs shot in music-video-style are innovative, though songs don't really fit well into a story like this.

Yuganiki Okkadu can be visited by those strictly on the hunt for novelty, but for the rest, we doubt you will find this a forceful proposition.
Share. Save. Connect.
Tweet
YUGANIKI OKKADU SNAPSHOT

See Yuganiki Okkadu full details
YUGANIKI OKKADU USER REVIEWS
1 - 2 OF 2 COMMENTS
POSITIVE  |  NEGATIVE |  NEWEST  |  OLDEST  |  MOST HELPFUL  |  LEAST HELPFUL
USER RATING
7.5
2 USERS
Performances
Script
Music/Soundtrack
Visuals
9.0
6.5
10.0
8.0
Can watch again - Unsure
Good for kids - No
Good for dates - No
Wait for OTT - Unsure
Phaneendra Pappu on 15th Feb 2010, 2:46pm | Permalink
This is one bloody film which has really missed the whole point. The money that was invested has created some beautiful locales, but the story and script is a big let down. Every frame is inspired from hollywood. I doubt whether Raghava has actually penned a single page of the script.

The second half is real pain to sit through. No explanation is given to the story whatsoever. The movie felt like a cheap softcore. Andrea is way better than Reema sen.

The background score is excellent, but can't help the downfall of the film. Karthi is believable in his role.

ADVERTISEMENT
This page was tagged for
yuganiki okkadu movie download telugu
yuganiki okkadu full movie Download
yuganiki okkadu full movie download
yuganiki okkadu Telugu story
yuganiki okkadu wiki
Follow @fullhyderabad
Follow fullhyd.com on
About Hyderabad
The Hyderabad Community
Improve fullhyd.com
More
Our Other Local Guides
Our other sites
© Copyright 1999-2009 LRR Technologies (Hyderabad), Pvt Ltd. All rights reserved. fullhyd, fullhyderabad, Welcome To The Neighbourhood are trademarks of LRR Technologies (Hyderabad) Pvt Ltd. The textual, graphic, audio and audiovisual material in this site is protected by copyright law. You may not copy, distribute, or use this material except as necessary for your personal, non-commercial use. Any trademarks are the properties of their respective owners. More on Hyderabad, India. Jobs in Hyderabad.