The film is a big, noisy blend of globetrotting, coy sexuality and cartoonish political intrigue, solidly in the Bond tradition. Happily, though, the filmmakers have been smart enough to push this story - at least until its loud, turgid ending - in some interesting and surprising directions, making it perhaps the most satisfying Bond movie since The Spy Who Loved Me. For instance, this Bond is curiously vulnerable and decidedly flappable underneath the cynical urbanity. At especially perilous moments, Mr. Brosnan's features register panic, fatigue, pain and even tenderness. 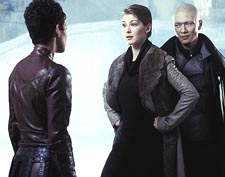 Everything else is strictly formulaic. Bond is captured in the film's requisite action-packed pre-credits sequence and tortured by interrogators. Emerging with the very un-chic Robinson Crusoe look, he finds that he has been disavowed, and in a quest to restore his good name, sets out for revenge against the North Korean renegade Zao (Rick Yune).

Bond is soon facing off with Toby Stephens' sneering entrepreneur, foiling plans for world domination and getting jiggy with the mysterious Jinx (Berry) and Miranda Frost (Pike). Part of the fun in seeing James Bond brought low lies in the certain knowledge that he will triumph in the end. His enemies, luckily for him, share an essential trait with those who have gone before them. Given the choice between a quick, efficient method of killing and one that calls for long speeches and slow-moving high-tech machinery, they will unfailingly choose the latter.

The script smartly pilfers ideas from the Bond back catalogue, mastering all the elements that make the old school outings work: sly in-jokes, preposterous action, clumsy innuendo and 'classic' (i. e. very funny or outrageously cheesy) one-liners. But throw in some honest-to-God terrific stunts (including an all-time great sword fight), and we have a recipe that blasts the veteran franchise kicking and screaming into the 21st century.

On the debit side, the acting is terribly disappointing. Berry brings about as much conviction as you might expect to a role that, essentially, is the bodacious equivalent of a hit of Viagra. What she does do well is hold her own with Brosnan and chase criminals with a gun in hand. She even manages to either go barefoot or wear sensible shoes when running from the bad guys, something previous Bond girls never seemed able to figure out. But after the action, she is forced to deliver some of the most dunderheaded double-entendre imaginable.

As for Our Man James, this is the first time I've noticed that he has as many outfits as Barbie. There's Tuxedo Bond, Turtleneck Bond, Pajama Bond, Saville Row Bond, etc. The rest of the cast is strictly so-so, but with an explosion occuring every 45 seconds, that is easy to forgive. Another gripe - Director Lee Tamahori blasts right past a perfectly good ending, only to burn a superfluous 20 minutes on an all-action, all-gimmick epilogue that leaks suspension of disbelief like a sieve.

ADVERTISEMENT
This page was tagged for
Die Another Day Full Movie Free Download
the day another day full movie download in hindi
die another day full movie hindi dubbed free download
james bond die another day full movie in hindi download
Die another day full movie in hind download
Follow @fullhyderabad
Follow fullhyd.com on
About Hyderabad
The Hyderabad Community
Improve fullhyd.com
More
Our Other Local Guides
Our other sites
© Copyright 1999-2009 LRR Technologies (Hyderabad), Pvt Ltd. All rights reserved. fullhyd, fullhyderabad, Welcome To The Neighbourhood are trademarks of LRR Technologies (Hyderabad) Pvt Ltd. The textual, graphic, audio and audiovisual material in this site is protected by copyright law. You may not copy, distribute, or use this material except as necessary for your personal, non-commercial use. Any trademarks are the properties of their respective owners. More on Hyderabad, India. Jobs in Hyderabad.