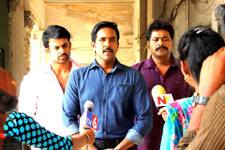 Kritika Deval / fullhyd.com
EDITOR RATING
5.5
Performances
Script
Music/Soundtrack
Visuals
7.0
4.5
6.0
6.5
Suggestions
Can watch again
No
Good for kids
No
Good for dates
No
Wait to rent it
Yes
We don't blame people for groaning out loud when someone mentions Ram Google Varma. The man has been responsible for more eye-, ear-, and brain-sores than any man should be allowed to get away with. But we do blame them for forgetting that when RGV gets his stuff together, things get pretty interesting.

Anukshanam happens to be one of those occasions when we're reminded of why we still keep him around.

A taut thriller about a serial killer on a spree, Anukshanam sees Manchu Vishnu portraying a surprisingly heroics-free cop (for the most part) named Gautham. He toes the line, gets the job done, makes his wife (Tejaswi Madivada) happy etc.

However, a series of brutal murders involving young women interrupt his too-good-to-be-true life with quick efficiency, and soon he is embroiled in a cat-and-mouse game with a psychotic killer where the cat and the mouse keep exchanging definitions. Also by Gautham's side is Shailaja (Revathi), an NRI behavioral scientist who specialises in killers with psychoses.

The chase is fun for a while, but the plot soon loses focus, becoming more about how horrified everyone is at the murders than about the dynamics between the hero and the villain. Pretty soon, enough people die that further deaths stop surprising you. Keep in mind that this is a tiny movie that spans less than two hours. The climax is rushed to the extreme and is largely incomprehensible.

What keep the film afloat despite the shaky plot are the wonderful performances by Vishnu, Revathi and the fantastic new find that is Surya. Vishnu does justice to his role despite the fact that his character gets rather tedious later on in the movie. Revathi plays her role of the pragmatic shrink with great panache, and is a delight to watch. Surya is astonishingly appreciable as the serial killer and has obviously put in a lot of effort. Brahmanandam provides a few genuine laughs, and Kota is just the right amount of oily as the home minister of a city under siege.

The cinematography is impressively toned down, again reminding us of just what is so great about RGV and his films. There is little gore, and the film gets by quite well upon just the suggestion of violence. The soundtrack keeps the atmosphere taut throughout.

As a thriller, Anukshanam loses its footing disappointingly fast. As just a movie that's entertaining despite flaws, it is well worth your afternoon. Just don't expect your serial killer to be a Dexter-grade mastermind, and you'll do just fine.
Share. Save. Connect.
Tweet
ANUKSHANAM SNAPSHOT 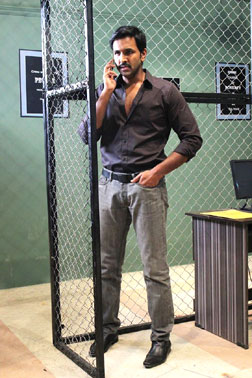 ADVERTISEMENT
This page was tagged for
Anukshanam telugu movie
Anukshanam reviews
release date
Vishnu Manchu, Tejaswi Madivada
theatres list
Follow @fullhyderabad
Follow fullhyd.com on
About Hyderabad
The Hyderabad Community
Improve fullhyd.com
More
Our Other Local Guides
Our other sites
© Copyright 1999-2009 LRR Technologies (Hyderabad), Pvt Ltd. All rights reserved. fullhyd, fullhyderabad, Welcome To The Neighbourhood are trademarks of LRR Technologies (Hyderabad) Pvt Ltd. The textual, graphic, audio and audiovisual material in this site is protected by copyright law. You may not copy, distribute, or use this material except as necessary for your personal, non-commercial use. Any trademarks are the properties of their respective owners. More on Hyderabad, India. Jobs in Hyderabad.