The League Of Extraordinary Gentlemen Review

Question: What do you get when you cross Star Wars Episode II - Attack of the Clones with The Lord of the Rings and Harry Potter - The Chamber of Secrets? To diversify the gene pool a little further, take a few characters like Tom Sawyer (Shane West), Dr. Henry Jekyll (Jason Flemyng), and the alter ego, Mr. Hyde, of course - Captain Nemo (Naseeruddin Shah) - Mina Harker (Peta Wilson), Rodney Skinner (Tony Curran) - better known as the Invisible Man - and Dorian Gray (Stuart Townsend). Give them abilities that their creators never even imagined one day they would possess.

Answer: "The League of Extraordinary Gentlemen", and, might I add, a Lady. And that vital cog in the wheel is Allan Quatermain (Sean Connery): 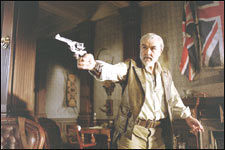 There's only one of me Single-handedly saving the humanity

Ain't no chance of the production company dropping me

Press be asking do I care for my vanity I don't know, yeah, probably

I've been looking for getting on earth some sanity

But for now I'm down for saving-the-world-ology

(Good thing we are not famous enough for Kylie Minogue and Robbie Williams to sue for plagiarism.)

So, what does this League have to do? Simple. The world is under threat of a World War (the year is 1899), which is the handy work of The Phantom. Quatermain has been asked by M (Richard Roxburgh) - life is a full circle for some (seems like yesterday when Connery first played 007 in Dr. No) - to assemble this League and fight the menace.

As the name suggests, everything in the film is huge, and extravagant. Captain Nemo brings in a lot of Indian influence (and for once in a Hollywood film, 'Indian' does not mean of the American variety) - Goddess Kali, turbans, chandeliers et al.

Anyway, this Phantom is turning one country against another so that he can sell them his advanced weaponry (not unlike a Big Western Brother, may I say?). To tide over this crisis, the leaders of the world are to meet in Venice for a conference. Fearing that the Phantom will sabotage it, The League heads there, only to realise that it was a trap all along. The main idea was for the Phantom to acquire samples of the stuff that makes each character unique, and this he accomplishes with the help of Dorian Gray.

The League now heads for Mongolia where they finish off the bad guys in nothing less than a celestial fight. But, wait! Did you know who the Phantom actually turned out to be? It was M. Now we know why Her Majesty's British Empire needs a 007.

The film is not much different than what you would expect a comic book adaptation to be - larger than life characters, super cool heroes, snippy humorous interjects, great special effects, and amazing casting. What it lacks is innovation. I mean, how often have we seen a Government Agent asking a retired spy/hunter/marksman/cop/soldier/ explorer to save his country from disaster?

It proves that fiction writing is great in the sense that you can make up almost anything - solar-powered submarines, turbo-charged automobiles (in 1899), streets in Venice etc. - none of which makes any sense. But isn't that the difference between fiction and reality? Fiction is supposed to make sense.

ADVERTISEMENT
This page was tagged for
The League Of Extraordinary Gentlemen english movie
The League Of Extraordinary Gentlemen reviews
release date
Sean Connery, Shane West
theatres list
Follow @fullhyderabad
Follow fullhyd.com on
About Hyderabad
The Hyderabad Community
Improve fullhyd.com
More
Our Other Local Guides
Our other sites
© Copyright 1999-2009 LRR Technologies (Hyderabad), Pvt Ltd. All rights reserved. fullhyd, fullhyderabad, Welcome To The Neighbourhood are trademarks of LRR Technologies (Hyderabad) Pvt Ltd. The textual, graphic, audio and audiovisual material in this site is protected by copyright law. You may not copy, distribute, or use this material except as necessary for your personal, non-commercial use. Any trademarks are the properties of their respective owners. More on Hyderabad, India. Jobs in Hyderabad.