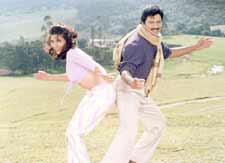 EDITOR RATING
3.0
Performances
Script
Music/Soundtrack
Visuals
NA
NA
NA
NA
Suggestions
Can watch again
NA
Good for kids
NA
Good for dates
NA
Wait for OTT
NA
After watching Ammaye Navvithe, the more masochistic among us might just wonder what a sequel to this might be like. Strictly adhering to Murphy's as yet unstated law that things that are regressing will accelerate further in that direction, we, the original masochists, have the following conclusions:
We invite our readers who have been blessed enough to catch this flick to contribute more to this exercise in clairvoyance and enrich this page. But the others need not feel disheartened - just read the rest, and we'll try to recreate the experience of watching the film for you. And you'll wish you'd stuck to feeling disheartened and left right here.

Ammaye Navvithe is the tale of Sundaram (played jointly by Rajendra Prasad and some fat), a man who is still looking for a job at an age when most government employees have already made their thirty-fifth million. He comes to the village of Talamanchi, ruled by Seshadri Naidu (Ranganath), a feudal-era chieftain whose brain was brewed in the same cauldron as that of Mullah Omar and his tribe. There's a Hindi lecturer post vacant in the college there, and Sundaram wants that.

Naidu is a glorified ruffian, and his protectiveness towards women actually makes it seem like a vice. He banishes people from the village for helping young lovers unite, makes college students start with an oath everyday that all women are their sisters, pronounces the death sentence on men who attempt to outrage women, and generally makes himself look like he was molested as a kid.

Sundaram gets the job by some clever manipulation (clever, that is, if the most thought-provoking piece of writing you've ever come across is twinkle twinkle little star), and then does the unthinkable - he starts wooing Sireesha (Bhuvana), the daughter of Naidu. The girl has about as much intelligence as you would require to go along with a 35-24-35 body, and you could put her to sleep by telling her the story of Goldilocks and the three bears. Whoever woos her deserves her, and you lose your last shred of sympathy for Sundaram.

Of course, Naidu finds out Sundaram's designs, and issues him an ultimatum in true Telugu film style that if in 15 days he cannot get Sireesha to say that she loves him, he'll be dead.

The first thing that strikes you about this film is how a man who ruled the comedy genre of Telugu cinema for over a decade has been reduced to doing shoe-string budget films that can't even afford script and dialogue writers, forget glitzy and colorful presentation. He needs to get rid of about 20 kilograms, and that's for starters. After that, we really don't know.

Bhuvana is made to look dumb, and so it would be unfair to comment on her potential, but whoever thought her smile deserves a film must be an interesting subject for psychology students and all the world's conmen. L B Sriram, Brahmanandam and M S Narayana all have roles that suck, and only Jayasudha manages to get out gracefully in a guest appearance.

You'd be doing this film a favor if you watch it even on TV, which, we guess, should be pretty soon.
Share. Save. Connect.
Tweet
AMMAAYE NAVVITHE SNAPSHOT

ADVERTISEMENT
This page was tagged for
Ammaye Navvithe
Ammaaye Navvithe telugu movie
Ammaaye Navvithe reviews
release date
Rajendra Prasad, Bhuvana
Follow @fullhyderabad
Follow fullhyd.com on
About Hyderabad
The Hyderabad Community
Improve fullhyd.com
More
Our Other Local Guides
Our other sites
© Copyright 1999-2009 LRR Technologies (Hyderabad), Pvt Ltd. All rights reserved. fullhyd, fullhyderabad, Welcome To The Neighbourhood are trademarks of LRR Technologies (Hyderabad) Pvt Ltd. The textual, graphic, audio and audiovisual material in this site is protected by copyright law. You may not copy, distribute, or use this material except as necessary for your personal, non-commercial use. Any trademarks are the properties of their respective owners. More on Hyderabad, India. Jobs in Hyderabad.