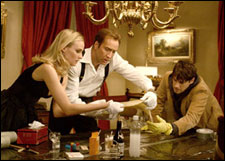 Ravi Mundoli / fullhyd.com
EDITOR RATING
5.0
Performances
Script
Music/Soundtrack
Visuals
NA
NA
NA
NA
Suggestions
Can watch again
NA
Good for kids
NA
Good for dates
NA
Wait for OTT
NA
If you're into trivia and quizzing, you may have come across the phrase "kitchen question". This is a cooked-up quiz question that has been "invented" by the quizmaster in a moment of inspiration. It is entertaining, sometimes funny, intriguing, but essentially bogus. Just about sums up National Treasure: Book Of Secrets.

While all fictional plots are by definition "made in kitchen" plots, some are "made in kitchen under the influence of recreational drugs" plots. NT: BoS is one such, and we're not even sure only "recreational drugs" were involved. The substances used appear to be of the sort that offer solace to the honest poppy farmers of Afghanistan that someone in the world continues to value their product and service offerings.

Mitch Wilkinson (Ed Harris) produces a fragment of John Wilkes Booth's diary which seems to prove that Benjamin Franklin Gates' (Nicholas Cage) Civil War era ancestor was the mastermind of the Lincoln assassination. Ben and his father Patrick (Jon Voight) believe that their forefather was innocent, and the only way to prove it is to show that the fragment points to the location of a huge Native American treasure.

This sets off a chain of "deciphering" incidents which are so contrived that they're hilarious. Not since Sherlock Holmes glanced at Hugo Baskerville's shoe and derived the color of Hugo's father's nanny's mother's apron's tailor's nightclothes have we seen such feats of accurate decoding.

The trail leads from Washington DC to Eiffel Tower to Buckingham Palace (where they break into the Queen's study) before hopping back across the pond and into the White House (where they break into the Oval Office). Each clue leads neatly to the next one, there are no red herrings, and if you were playing one of those treasure-hunting video games, you would be totally thrilled with your progress until this point.

All the clue-gathering and puzzle-solving is interspersed with unoriginal action and chase sequences. While Ben, the geeky sidekick Riley Poole (Justin Bartha) (who has his funny moments) and the gorgeous estranged archivist girlfriend Abigail Chase (Diane Kruger) are cavorting around the NATO countries with Mitch on their tail, Patrick moodily potters around his Washington home wondering whether granddaddy's name will ever be cleared.

The penultimate clue is a Native American carving in the Olmec language which, happily enough, Ben's crusty divorcee professor mother Emily Appleton (Helen Mirren) can translate into the usual Chief Seattle's speech type of New Age epigram, "Go to the place where the darkening mist throws the veiled rain into the golden sunshine under the two turtles of our ancestors yada yada".

They crack this obvious clue in 23 milliseconds and head out to the Wide West for a climax which involves a nice day hike with the family, sidekick, girlfriend, and villain. There, they solve an engineering mechanics problem which if memory serves us appeared in the 1993 IIT-JEE paper, and also indulge in more video game style leaping-over-chasms and finding-the-entrance-to-the-next-level type stuff.

Did we mention that in passing Ben kidnaps the US President and breaks into the Library of Congress? Well, there you go; it's that sort of movie. It takes the notion of mindless entertainment to a level that the David Dhawans of the world would be proud of.

At this point we should probably note that Harvey Keitel is also there in this movie, looking like the gritty FBI agent he is, and doing diddly squat to move the plot along - the Hollywood equivalent of the item number.

If you skipped the brilliantly funny and painstakingly written last 9 paragraphs to find out whether NT: BoS is worth a watch (and why o why do we think you did!), here's the (non-Afghani) dope: The movie has a far-fetched plot borrowed from multiple sources (Indiana Jones, Clive Cussler, Dan Brown etc.) and not very slick action sequences, and the acting is mostly hamming.

But all that being said, it has its intentional and unintentional funny moments, and if you're in the mood for utterly brain-dead regress-into-video-game-playing-days entertainment which leaves no lingering traces once you leave the theater, it's worth a dekko.
Share. Save. Connect.
Tweet
NATIONAL TREASURE - BOOK... SNAPSHOT
NATIONAL TREASURE - BOOK OF SECRETS (HINDI) SNAPSHOT

ADVERTISEMENT
This page was tagged for
Natipnal Treasure 2 book of secret hindi
Natipnal Treasure book of secret hindi
national treasure book of secrets download in hindi
national treasure full movie in hindi dubbed
National treasure full movie in hindi dubbed
Follow @fullhyderabad
Follow fullhyd.com on
About Hyderabad
The Hyderabad Community
Improve fullhyd.com
More
Our Other Local Guides
Our other sites
© Copyright 1999-2009 LRR Technologies (Hyderabad), Pvt Ltd. All rights reserved. fullhyd, fullhyderabad, Welcome To The Neighbourhood are trademarks of LRR Technologies (Hyderabad) Pvt Ltd. The textual, graphic, audio and audiovisual material in this site is protected by copyright law. You may not copy, distribute, or use this material except as necessary for your personal, non-commercial use. Any trademarks are the properties of their respective owners. More on Hyderabad, India. Jobs in Hyderabad.