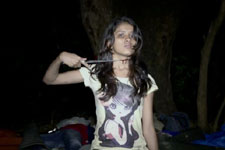 Anyway, a few days after the lone survivor turned up, HD footage got retrieved from the camera of one of the missing persons, which got stitched up into the film that we saw today, apparently. Sounds familiar? That's probably because it kind of is.

Even though the film hyperlinked above might not be too familiar, The Blairwitch Project might ring some bells. This movie has its own witch, too, and it's like they all exchange notes on how to mess with us mortals. Or, maybe they all can only do the exact same things in the exact same order. Whatever the case is, it makes for some very tedious film-watching, or some very easy filmmaking, depending on which end of the camera you're at.

So, anyway, we get six days worth of footage, with Ramesh, the group's camera guy, leading the rest to their obvious doom. Not much other than atmosphere building happens till Day 3, which is when the spooking starts. There isn't much that we can tell you about the rest without spoiling it. However, rest assured in the knowledge that every step will be spoiled, and that if you have already seen The Blairwitch Proiect, the film is pretty much spoiled for you anyway.

Which begs the question, "Why does all found footage have to be the same found footage?". Is there something nefarious going on behind the scenes? We get that TBP was a cult flick, which almost singlehandedly created the genre. But then, A Trip To The Moon was the first ever sci-fi movie, and did not result in every sci-fi flick ever being only about weirdness on the moon.

Which begs further questions, such as, "Is there a coven that has a monopoly on the kind of found footage that reaches human hands?", "Does this witch cartel have members who go around whispering the same story over and over and over and over again into the ears of our newbie filmmakers?", and, in particularly introspective (read: bored) moments, "Is their aim world domination, or just to plant red herrings?".

The point is, this seems to be a movie you have most probably seen in the past, and will most likely see again in the future. This, however, doesn't take away from the fact that writer and director K S Ashoka seems genuinely invested in giving us a movie that's easy on the eyes. Chitram Kadu Nijam is a beautiful-looking film from start to end.

The spooks make up for not being spooky by being pretty instead. The screenplay is nicely paced, and, despite being predictable, moves along at a pace decent enough that it doesn't become too irksome. The camerawork gets pretty creative, if derivative, and is neatly executed for the most part. The background complements the film well. The performances are quite genuine, but are marred by awkward dubbing.

Chitram Kadu Nijam would've been served better by the title Kotha Chitram Kadu, Nijam. However, it is not an entirely awful way to while away a couple of hours.
Share. Save. Connect.
Tweet
CHITRAM KADU NIJAM SNAPSHOT 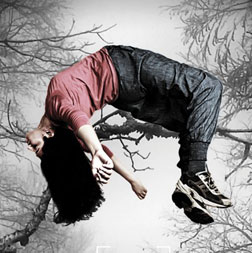