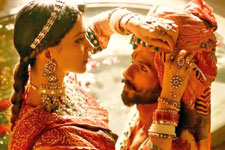 T J Reddy / fullhyd.com
EDITOR RATING
5.5
Performances
Script
Music/Soundtrack
Visuals
8.0
4.0
6.0
7.0
Suggestions
Can watch again
No
Good for kids
No
Good for dates
No
Wait for OTT
No
Before we get anywhere, let's address the elephant in the room (and I'm not talking about this film's runtime). For all their talk about misinterpreting and ruining cultural icons, we don't see the same people burning effigies when idols of Lord Ganesha playing cricket or kicking a football or, worst of all, having a six-pack are made and sold during Ganesh Chaturthi. We as a people realize that these are but artistic interpretations of larger-than-life mythological begins. Padmavati/Padmaavat rides on the same boat, with the only difference being, the bigger and more singular the project, the louder the controversy.

Padmaavat is the cinematic adaptation of Malik Mohammad Jayasi's epic poem of the same name, originally written in 1540. The poem/film follows the lives of Rawal Ratan Singh (Shahid Kapoor), the ruler of Mewar and the man that resides at Chittor (not the one in Andhra), and his beautiful and brilliant wife Rani Padmavati (Deepika Padukone).

The Sultan of Delhi, Alauddin Khilji (Ranveer Singh), makes Padmavati the primary object of his desire as he has an affinity for the most beautiful things the world has to offer. Like many a mythical war, this one, too, is fought over a woman as the barbaric Khilji lays siege to the kingdom of Chittor to fulfil his desires whereas the honourable Ratan Singh, Padmavati and their crew of selfless soldiers fight back to uphold the pride of their kingdom while waxing poetic about what it truly means to be a Rajput.

The main thing you will remember about the movie will be its visual grandeur. The sets are huge and high in detail. The makeup and costume design is on point. The palaces and battlefields are lit and shot delicately and desolately, respectively. And the unmistakable Bhansali palm print is all over the film in a way that is both unique and unavoidable. Like in many of his projects before this, all these elements and Bhansali's love of excess work at both enhancing the film and detracting from its overall impact.

Under the immense weight of the traditionally appropriate garb and sets you wished you lived in, is a story struggling to justify its status as a modern Indian epic - the reason being the story's simplistic nature. We make at least 10 films a year based on the characters in the Ramayana and the Mahabharata because of the layering and complexity the story and the characters in them possess. They are larger-than-life yet deeply relatable, they represent royalty but have humanistic problems proletarians can identify with, and most of all, those stories and characters have a sense of dimension about them.

Director Sanjay Leela Bhansali plays to strengths and gives the audience what they came looking for, but as we'd mentioned once before, "If your story tells the audience two plus two is four, it has no reason to exist." Bhansali challenges neither his audiences nor himself with his story-telling. If you were to take away the palaces, magical weapons and mythical statuses, the great Indian epics would still stand tall going off the power of their narrative. Padmaavat doesn't have the same luxury. A peek behind its veil reveals a diabetic who looks spoilt by choice but is unable to enjoy any of it owing to some glaring internal failings.

Conversely, one man chooses to take these failings in stride and run with them. He doesn't just throw caution to the wind - he grabs caution by the throat, slices it in half and walks right between said halves. That man is Ranveer Singh, and he is glorious as the ill-mannered, one-track-minded, manipulative and murderous Alauddin Khilji. His tandem with the equally compelling Jim Sarbh is the best of what this movie has to offer in terms of performance and artistic expression.

Singh drags himself to a place that is just a few levels below that of Heath Ledger in The Dark Knight and Nawazuddin Siddiqui is Raman Raghav 2.0, and fully immerses himself in that role while only stopping to tell the audiences to buckle their seatbelts in preparation for the ride from hell he is prepared to take them through.

The duo of Shahid Kapoor and Deepika Padukone have mastered the art of being the faultless portraits of Rajput heritage to a tee. Rocking a unibrow to perfection, Padukone showcases some physical acting that rivals that of Charlize Theron's Furiosa in Mad Max Fury Road. Her demeanour and body language, and even things as small as eye movements, convey more about her character than the many saccharin-filled speeches she spouts.

Shahid Kapoor seems to have drawn the smallest of the straws in this triumvirate as his character exists solely to wax poetic endlessly about the "aan, maan, shaan" of being a Rajput. No amount of well-structured abs and well-kept moustaches can distract you from the fact that he is the weakest of all three main characters, and his efforts at adding gravitas to the repetitive speeches go in vain at about the 90-minute mark.

Also repetitive is the film's music. The songs and where they play in the grand scheme of things are reminiscent of Bhansali's previous works. The movie hits specific beats at specific times, and that leads to a feeling of familiarity. While it doesn't breed contempt on this occasion, it reminds you that there were better instances of this brand of storytelling from times past.

However, the same cannot be said about the background score. It might aggrandize horrific acts from our past we need to be ashamed of and unabashedly cheer some poor decision-making on the part of supposedly intelligent kings, but it still oozes that feeling of epic-ness we crave.

Going hand in hand with the background score are the sets in the background and the costumes in the foreground. While they are not bright and shiny, they reflect the rugged landscape of Chittor to perfection. But what truly takes the shine off them is the movie's poorly rendered 3D that was clearly added in post-production. This distracting bit of oversight acts as the perfect representation of the many issues thwarting this film from being a truly spellbinding cinematic experience.

At a juncture in the movie, Khilji's forces roll up to the fort of Chittor with a band of gigantic weapons hidden under even larger sheets. The movie works hard at building audience anticipation for the reveal of the said weapons. Once the sheets come down, however, all you see are catapults that shoot fireballs. Even though the catapults look great and fire without a hitch, you get a sense that you've been there before, and have seen those weapons in action one too many times and in one too many stories.

And that feeling of deflation you experience is what makes Padmaavat an inessential film-going exercise. While you applaud the effort, support the artists, uphold freedom of speech and expression, and turn a blind eye to the movie's glorification of jauhar, you are left with the sentiment that there was more that could have been done with lesser, and that Bhansali's shtick might be running its course.
Share. Save. Connect.
Tweet
PADMAAVAT SNAPSHOT 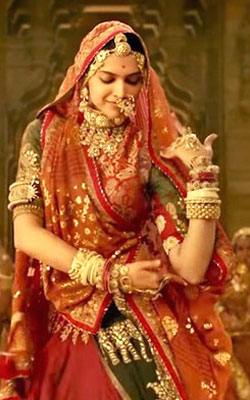 ADVERTISEMENT
This page was tagged for
Padmaavat hindi movie
Padmaavat reviews
release date
Deepika Padukone, Shahid Kapoor
theatres list
Follow @fullhyderabad
Follow fullhyd.com on
About Hyderabad
The Hyderabad Community
Improve fullhyd.com
More
Our Other Local Guides
Our other sites
© Copyright 1999-2009 LRR Technologies (Hyderabad), Pvt Ltd. All rights reserved. fullhyd, fullhyderabad, Welcome To The Neighbourhood are trademarks of LRR Technologies (Hyderabad) Pvt Ltd. The textual, graphic, audio and audiovisual material in this site is protected by copyright law. You may not copy, distribute, or use this material except as necessary for your personal, non-commercial use. Any trademarks are the properties of their respective owners. More on Hyderabad, India. Jobs in Hyderabad.