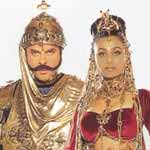 It's something that could happen to you. You'd just need:


a. A corrupt CM who's also impulsive enough to offer a fiery journo the post of CM for a day without realizing that in that one day in power that guy can expose all his crooked activities,
b. The constitution to have enough provisions for a deal like that,
c. The people and the opposition to be docile enough to accept as CM someone who can't claim any form of official representation of the people's interests, and
d. To be a superhero yourself, capable of bashing up several well-built goons all alone (and this is key).

To be fair, Shankar did have fine intentions. He wanted to show the rot in the political system and the plague that that is in our everyday lives. Only, this one comes with all the problems that most Indian cinema has - a script that panders to the box-office instead of staying credible, middle of the road fight dramas that appear as probable as your finding yourself running around semi-naked in the streets of Koti and flamboyant and sometimes gaudy song and dance sequences. And the very credible feeling that you're left with is a pity for what might have been.

Sivaji (Anil Kapoor) is the chief news reporter for a TV channel and is assigned to interview the Chief Minister Chavan (Amrish Puri). As he starts digging up all the illegal activities of the government in the t??te-??‚Â -t??te, Chavan squirms, and to justify the behavior of the government, challenges Sivaji to don the mantle of CM for just a day and see for himself how much pressure a CM faces each day.

So Sivaji becomes the CM for a day, and in just that one day manages to work wonders. Included in these wonders are chasing and beating up a bunch of goons in broad daylight, issuing a few thousand suspensions to various government officials against whom any bad reports exist (you're left wondering who'd be left to work in the government offices after that, but that's the lesser of the cribs), and as a final act arrests the erstwhile CM, thus gaining Chavan's eternal enmity.

You've got to give it to Shankar that this part indeed is punchy despite some oddities. You are in the firm grip of the film, and understand why Mudhalvan, the original Tamil version, and Oke Okkadu, the Telugu dub, were such hits. But the film loses it after this through more problems than you can count.

The one-day completed, Sivaji thinks that the whole issue is over and plans to get back to a normal life by getting married to his ladylove Manjari (Rani Mukherjee, in a glamdoll role). But of course, Chavan has several grievances to nurse, and Sivaji and his parents are the target of his vicious desire for vendetta.

But Sivaji is superman, and it'll take more than a few bunches of goons to do him in. And at the insistence of Bansal (Paresh Rawal), a civil servant, Sivaji proclaims his candidature for the forthcoming elections, and wins them hands down. And Chavan decides to get Sivaji killed by giving supari. How Sivaji disposes of Chavan in a very crafty manner is certainly worth a watch (and it proves again that the system does corrupt).

Shankar could've done a much better job of the remake - instead of improving on the original, he just puts in too much of the clich??‚Â©s, in obvious attempts to incorporate all the commercial elements. There are some stunning visuals in the movie, though; the photography is fantastic. The songs are in general a sight for sore eyes - all the money put into them pays off on the whole, though sometimes you have this feeling that you've seen it all in some Telugu films of yore. There is also an interesting usage of cartoons to express ideas in a funny manner.

Anil Kapoor is excellent, and is the biggest selling point. Rani Mukherjee helps in the song and dance sequences and thus dutifully fulfills her responsibilities. But standing apart is Paresh Rawal. The guy has a unique sense of timing, and the one-liners that he delivers in a rather indifferent manner are sidesplitting. All other performances are good, except the rather crass humor of Johnny Lever.

The music by A R Rehman is just adequate, but there are a couple of songs that allow you a peek at the hidden part of the iceberg that his talent is in this film. Mention should be made of the haunting tune of Chalo Chale Sajana, but the let down is in the form of some inane lyrics.
Nayak gives you the impression of a film that could have been. Your decision to
watch it will depend on what the other options in town are.
Share. Save. Connect.
Tweet
NAYAK SNAPSHOT

See Nayak full details
NAYAK USER REVIEWS
1 - 3 OF 3 COMMENTS
POSITIVE  |  NEGATIVE |  NEWEST  |  OLDEST  |  MOST HELPFUL  |  LEAST HELPFUL
USER RATING
7.8
22 USERS
Performances
Script
Music/Soundtrack
Visuals
NA
NA
NA
NA
Can watch again - NA
Good for kids - NA
Good for dates - NA
Wait for OTT - NA
Maqsood Siddiqui on 15th Sep 2001, 5:32pm | Permalink
i have seen the picture which is nice and i am happy to rate this picture excellent
RATING
8
Aravind Jk on 14th Sep 2001, 8:24am | Permalink
the movie aint that great!.*
RATING
4
The Mavericks on 10th Sep 2001, 11:09am | Permalink
Actually we wanted to give it 4 stars....but when you find silly conceptual errors..that too in such a movie,which by and large demands perfection...we took one star back and now give it 3 stars..why??

well..the reasons are many,firstly you simply don`t find reporters dressed the way pooja batra was dressed to ask questions to CM....that will never happen.What is that handset which keeps ringing even when its on fire and actually starts to melt...?lets say its nokia..then they can advertise as " NOKIA,RINGS WHILE IT BURNS!" ..well,back to business....The interview of Anil kapoor to CM is simply not realistic....there is no finger pointing or any rude talk..in interviews of such high order..badly done.The director focused more on rhetoric then realism,this is where the movie looses.Its not practical to suspend officials just by hearing that they are corrupt or they succumb to political pressure,there has to be a proper procedure for doing such things...the way suspention orders were given seemed as if the director wanted to add pace to the screen play..any way...anyone can pick up errors out of any thing at any time...

but seriously,this is a good film..a film with some content..the MATRIX style still camera rotate effects deserve applause..al though they are not so refined as MATRIX..but well done.

What happens while watching this kind of movies is that,one goes with an expectation of quality,this movie sure does live up to it...but some silly errors put the whole mood down..some thing LAGAAN did not have

ADVERTISEMENT
This page was tagged for
Nayak film people comments
nayak movie hindi
saothlove movi nayak ki
HINDI.FILM.NAYAK
nayak film
Follow @fullhyderabad
Follow fullhyd.com on
About Hyderabad
The Hyderabad Community
Improve fullhyd.com
More
Our Other Local Guides
Our other sites
© Copyright 1999-2009 LRR Technologies (Hyderabad), Pvt Ltd. All rights reserved. fullhyd, fullhyderabad, Welcome To The Neighbourhood are trademarks of LRR Technologies (Hyderabad) Pvt Ltd. The textual, graphic, audio and audiovisual material in this site is protected by copyright law. You may not copy, distribute, or use this material except as necessary for your personal, non-commercial use. Any trademarks are the properties of their respective owners. More on Hyderabad, India. Jobs in Hyderabad.