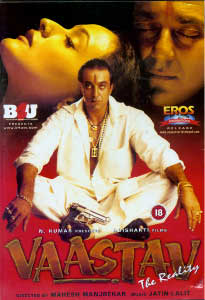 Avishek Gupta / fullhyd.com
EDITOR RATING
8.0
Performances
Script
Music/Soundtrack
Visuals
NA
NA
NA
NA
Suggestions
Can watch again
NA
Good for kids
NA
Good for dates
NA
Wait to rent it
NA
One thing is often said of reruns. These actually tell you whether a movie
is truly good. A great one will leave you falling in love all over again, and
a not-so-great one will show its true colors in the second run, sometimes even
after grossing highly in its first run.

And the pleasure of seeing a real good movie, all over again, is one of those
still unparalleled in life. True for 'Vastaav' too. This is the film that rewrote
the futures of both Sanjay Dutt and Mahesh Manjarekar.

This masterpiece from Manjarekar starts off on a light note highlighting the
simplicity of a family of four. Raghu (Dutt) and his elder brother (Mohnish
Behl) are struggling to find a proper job. Raghu finds peace and success in
a pav-bhaji stall put up by him with the help of a few friends.

Depicting the true nature of life in the Mumbai chawls, we see how the course
of events can so easily lead the average youngster astray. Compelled by circumstances,
our hero, along with his best friend, takes to crime, and soon they become underworld
kingpins.

Here the director is at his best, with acute and heartfelt rendering of the
Mumbai underworld. So lifelike are these scenes that it was assumed by many
that Manjarekar had connections with the underworld!

Especially wonderful is the way that the romance between the leads is handled.
Namrata excels in a small but sensitive role of a prostitute. And the role played
by 'ded-phutia', the best friend of Raghu, is absolutely breathtaking, albeit
a little melodramatic.

But what was hugely touted as the major reason of the film's success was its
ending, where we have a very sensitive portrayal of the futility of violence,
as Raghu is killed by a bullet fired from his own gun and by his own mother.

The screenplay and editing is crisp and goes lengths in establishing the high
quality of the film. An item number by Kashmira Shah went down very well with
the audience, as did the rest of the music by Anu Malik.

But what is definitely the very essence and character of the movie is the unparalleled
rendering of the cocaine-addicted underworld don, played by Sanjay Dutt as only
he can. It brought back memories of the hugely successful 'Khalnayak', where
Dutt had given a whole new meaning to the role of an underworld goon.

Overall, a must watch for those who had missed it earlier, and for those who
had liked it the first time itself, this is as good a time as any for a flashback.
Share. Save. Connect.
Tweet
VAASTAV SNAPSHOT

ADVERTISEMENT
This page was tagged for
vastav movie cheracter name
vastav.movie
vastav movie reviews
vastav don dailymotion
Santo ka Vaastav Kannada movie
Follow @fullhyderabad
Follow fullhyd.com on
About Hyderabad
The Hyderabad Community
Improve fullhyd.com
More
Our Other Local Guides
Our other sites
© Copyright 1999-2009 LRR Technologies (Hyderabad), Pvt Ltd. All rights reserved. fullhyd, fullhyderabad, Welcome To The Neighbourhood are trademarks of LRR Technologies (Hyderabad) Pvt Ltd. The textual, graphic, audio and audiovisual material in this site is protected by copyright law. You may not copy, distribute, or use this material except as necessary for your personal, non-commercial use. Any trademarks are the properties of their respective owners. More on Hyderabad, India. Jobs in Hyderabad.