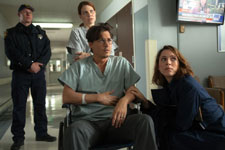 Nupur Barua / fullhyd.com
EDITOR RATING
5.0
Performances
Script
Music/Soundtrack
Visuals
6.0
5.0
6.0
7.0
Suggestions
Can watch again
No
Good for kids
No
Good for dates
No
Wait for OTT
No
Wally Pfister is best known for his camera work, specifically with Christopher Nolan. He is the man who gave us those superior visuals in all three Batman movies, and, more notably, Inception. So when an accomplished cinematographer like him decides to become a director with a movie that stars Johnny Depp, one can take the visual treat for granted. Is he any good with the story telling aspect, though? That depends on your expectations.

Will and Evelyn Caster are scientists - "partners in science and in life". Will (Johnny Depp) is very particular about not taking help from the government, and has been trying to build a machine that "collects" intelligence from all across the world, making it the biggest data resource. He is primarily a believer in artificial intelligence.

As he nears his goal, he is shot at by a young man at a seminar one night. Will survives the bullet wound, but the doctors soon discover that the bullet itself contained radioactive material that will slowly poison and kill him. He is given roughly a month to live.

In the meantime, a group of people who vehemently oppose the development of superior artificial intelligence targets various research centres and kills or wounds several scientists. FBI scientist Joseph Taggart (Morgan Freeman) survives one such attack, and begins to work on investigating the crimes with FBI agent Donald Buchanan (Cillian Murphy). Taggart is also a mentor of sorts to Will and Evelyn, and to Will's best friend Max Waters (Paul Bettany), also a scientist.

As Will lies dying, Evelyn comes up with the idea to upload his conscious mind into a system, so that his intelligence can live on after him. Max helps her with this, but soon after Will's death, he realises that the experiment cannot be allowed to proceed. After a fight with Evelyn, he walks out, only to be kidnapped by Bree (Kate Mara), a leader of the group that rebels against such experiments. Before Bree can stop Evelyn, however, the latter uploads Will's intelligence onto the Internet, and chaos sets in.

With the help of the virtual Will, Evelyn finds herself in a small deserted town named Brightwood, which she buys, and builds in it a huge data storage system in which life-altering experiments are carried out. Taggart and Buchanan understand that this could be threatening, and Max begins to agree with Bree's views. Together, all of them must stop Will the machine before it is too late.

The young man who shoots Will later asks him at the conference if the scientist wants to play or create God. And Will says that he will not be the first, or words to that effect. Somehow, this becomes the theme of the movie, when the virtual soul performs miracle after miracle, from making the blind see to getting the maimed to walk. These reborn people become blind disciples, and one wonders if there is a message there.

On a more superficial level, the movie is about the inevitable "collision between mankind and technology", with the latter becoming more powerful than the former. This is not the first movie to deal with the idea, nor will it be the last, but interesting though the premise is, the execution is disappointing. Once the genius mind is uploaded, there is a lot of jargon that is thrown around, and we are led to believe that it is a dangerous development. Why exactly this is the case is not explained. What was Will the machine trying to do? Save the world, or destroy it? Again, not clear, but the writers have played on the paranoia of Americans worldwide - what cannot be controlled has to be a threat. The rebels seem to have a cause, but why they are scared of the machine is also not explained.

Transcendence is not a sci-fi movie, not really. It is more a love story set in the times of advanced technology. It is not even an apocalyptic, dystopian setting. Evelyn's blind love for her husband, even when she knows he is dead, is poignant. Or at least, the idea is, because besides being a sucker for a speaking machine, there seems to be no reason why such a qualified young woman would not listen to her inner intelligence, emancipation be damned. With the hard-to-understand dialogues and the even-more-difficult-to-get intentions of the characters, the movie is a mesh of emotions and action, and neither impresses much.

Johnny Depp and Rebecca Hall both seem dazed by their respective roles - they are a couple obsessively in love with each other, but the lack of chemistry between the two actors makes this difficult to believe. And thus the premise that the movie is set on - the immortal love between two souls - falls flat.

Depp sleepwalks through the movie, and Hall overcompensates for her lack of feeling by overacting a bit. Morgan Freeman looks equally confused, and only Paul Bettany knows what he is doing. Kate Mara is sullen, like she is in most of her movies and television shows. She never smiles, and is now officially typecast as the angry young woman of Hollywood. Cillian Murphy is sadly wasted, as is Clifton Collins Jr.

The production design is innovative, and the makers have made use of existing spaces in the present time to tell a story that may as well take place in the future. The costume design is less imaginative, and could have done with some colour. The cinematographer takes advantage of the wide open and closed spaces to create an eeriness that is very much in keeping with the basic feel of the movie. Even the special effects are flawless, and some of the visuals related to the stuff that artificial intelligence can do is stunning.

The music is subtle, but the editing is a little loose. At 2 hours, the movie drags in certain places, and there are many false endings before the final climax.

Transcendence may not exactly live up to your expectations, but it does give you food for thought. The director's intention may have been to warn us of our increasing dependence on technology and the ill-effects that may have, and he has done a pretty good job there (the message, that is - we get it). What he should have concentrated on probably is a less convoluted screenplay, and the movie could have been a delightfully intellectual one. Watch only if you are a Johnny Depp fan, but remember, the actor is perhaps in his element only as Jack Sparrow.
Share. Save. Connect.
Tweet
TRANSCENDENCE SNAPSHOT 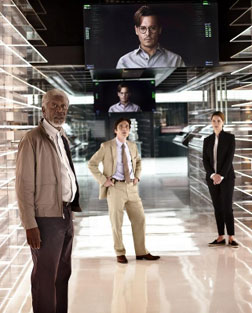 ADVERTISEMENT
This page was tagged for
Transcendence english movie
Transcendence reviews
release date
Johnny Depp, Rebecca Hall
theatres list
Follow @fullhyderabad
Follow fullhyd.com on
About Hyderabad
The Hyderabad Community
Improve fullhyd.com
More
Our Other Local Guides
Our other sites
© Copyright 1999-2009 LRR Technologies (Hyderabad), Pvt Ltd. All rights reserved. fullhyd, fullhyderabad, Welcome To The Neighbourhood are trademarks of LRR Technologies (Hyderabad) Pvt Ltd. The textual, graphic, audio and audiovisual material in this site is protected by copyright law. You may not copy, distribute, or use this material except as necessary for your personal, non-commercial use. Any trademarks are the properties of their respective owners. More on Hyderabad, India. Jobs in Hyderabad.