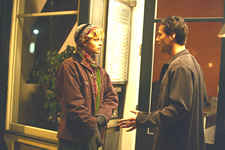 Amit Alampally / fullhyd.com
EDITOR RATING
3.0
Performances
Script
Music/Soundtrack
Visuals
NA
NA
NA
NA
Suggestions
Can watch again
NA
Good for kids
NA
Good for dates
NA
Wait for OTT
NA
Sweet November isn't worth your time unless you believe that only an empty cinema hall can give the privacy that you and your girlfriend want for your sweet nothings. And that, only if you have enough to talk for the entire duration of this movie, which is certainly no sweet nothing.

The film is a run-of-the-mill romantic tragedy with a threadbare storyline, and further diminished by weak on-screen performances. The story is something that the hills grew up listening to: ill-mannered boy falls in love with dying girl, and becomes transformed as she wastes away. And the performances can inhibit the growth of any hill.

Sara Deever (Charlize Theron) is a woman who considers it her moral responsibility to "heal" all pathologically-perfect-but-psychologically-inept males reeling under pressures in a world full of inadequacies - provided she comes across them at the fag end of a month. She keeps picking up a guy every month and tries to change his life for the better.

Nelson Moss (Keanu Reeves) is a totally self centered marketing executive who has the dormant animal instinct in man drive every decision of his - especially when it comes to pampering himself with hotdogs. Arrogant and selfish, he behaves rashly with his co-workers, boss and even girlfriend.

Not very unpredictably then, he loses his job and girlfriend, and even less unpredictably, gets to Sara. Sure enough, the magical transformation takes place (we are excused the details, please - this is already taking time), and our now-good-man asks Sara to marry him. She tells him she can't, and guess why? Hint, hint - you started reading at the beginning, remember?

Yes, Sara is a terminally sick patient, and sure enough, shortly after this she falls sick, only to recover too fast to believe in the care of Chaz (Jason Isaacs) - a merry and "gay" neighborhood saint who keeps popping up to make pre-timed deliveries of his packets of wisdom.

There is definitely nothing that can't be expected in the entire movie. And as if the banality of the tale weren't enough, there are a hundred gaffés - like, how does Sara know which car was Nelson's? How does she find his home when the business card has only the office address? Is it just a coincidence that he loses his job and his girl ditches him the very next day that Sara first tries to bag him with no success?

Keanu Reeves' acting could be called pathetic - only, it would be a pathetic understatement. This film demanded a fine display of emotions and not the regular Matrix-type throwing around of his limbs, and he is nowhere on target. You end up spending more effort trying to figure out his emotions than he must have emoting them. The only things he can't be blamed for are his dresses - they are bad by themselves.

Charlize is decent, and probably the only saving grace of this movie. And oh yes, she looks beautiful. But with Keanu at the other end of the axle, this cart wasn't going anywhere.

The others in the movie are simply that - the others. The tale goes around only these two characters. Jason Isaac looks as if he was inserted simply to have a saintly creature in the middle to justify, sanctify and otherwise legitimize two characters like Sara and Nelson getting together. The orphan kid looks cute, and acts quite well in that short role he has.

First timer Kurt Voelker still has a long way to go as a writer. Considering that this film was a remake of the 1968 screenplay by Herman Raucher, he didn't have much to do other than improve the dialogue. Not much to this end though.

But I forget the ultimate surprise. For those poor souls who survive and are still in their senses towards the end, Keanu delivers the final blow by singing (???) what appears to be a love song (anyway, after assuming so much all through the movie, it definitely isn't hard to assume this a love song). If I remember correctly, Keanu had a band of his own. My guess is that he left singing after he lost appetite for rotten eggs. It's definitely safer behind a silver screen.
Share. Save. Connect.
Tweet
SWEET NOVEMBER SNAPSHOT

ADVERTISEMENT
This page was tagged for
Sweet November english movie
Sweet November reviews
release date
Keanu Reeves, Charlize Theron
theatres list
Follow @fullhyderabad
Follow fullhyd.com on
About Hyderabad
The Hyderabad Community
Improve fullhyd.com
More
Our Other Local Guides
Our other sites
© Copyright 1999-2009 LRR Technologies (Hyderabad), Pvt Ltd. All rights reserved. fullhyd, fullhyderabad, Welcome To The Neighbourhood are trademarks of LRR Technologies (Hyderabad) Pvt Ltd. The textual, graphic, audio and audiovisual material in this site is protected by copyright law. You may not copy, distribute, or use this material except as necessary for your personal, non-commercial use. Any trademarks are the properties of their respective owners. More on Hyderabad, India. Jobs in Hyderabad.