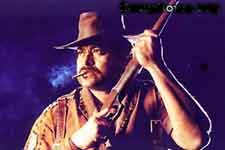 EDITOR RATING
6.0
Performances
Script
Music/Soundtrack
Visuals
NA
NA
NA
NA
Suggestions
Can watch again
NA
Good for kids
NA
Good for dates
NA
Wait for OTT
NA
All things to all people seems to be the credo of the filmmakers today. Sadly, even Chiranjeevi, who has a cult image of an action hero, seems to have fallen prey to this new concept that is being touted as the mantra of success. And Mrugaraju, a film with an interesting plot, albeit lifted from Hollywood's The Ghost And The Darkness, falls by the wayside trying to appeal to all sections of the audience. Such a pity, considering that this was a hugely awaited release of the megastar after a hiatus of nearly a year.

The government is building a bridge at a tribal village Adavipalli, but two man-eating lions wouldn't allow them. With supersonic speed they pounce on the people and have a hearty meal. The site engineer Simran, sensing the panic in the minds of the tribal laborers bordering on the verge of thoughts of desertion, recruits Chiranjeevi, who is the king of the jungle, to take care of the lion, and, if need be, kill it. Once Chiranjeevi takes to the task, he realizes that it is not easy to capture the lion, with all his attempts foiled either by a lack of judgement of the lions' behavior or by the sabotage attempts of the evil duo Rami Reddy and Surya, ganja cultivator and forest officer respectively.

In the face of increasing odds he kills the lion, but another one surfaces. Before he can tackle the second, he has to set right his personal problem, a love affair that has gone sour with the heroine Simran. And sadly, the jungle drama ends up as a sob story with the mother not allowing the father to even see the child.

Save for the phenomenal photography, there is nothing new about the film. Except for the part of Chiranjeevi trying to tame the lions, which has been photographed wonderfully, the story is quite contrived. What keeps the film afloat is the adventure drama, but unfortunately the director decides to sink his ship with a flashback that doesn't seem to end, contributing to tears and heartache. But the first part of the film is very interesting, and children would like it.
Share. Save. Connect.
Tweet
MRUGARAJU SNAPSHOT

ADVERTISEMENT
This page was tagged for
Mruga raju movie download
mruga raju telugu movie
mrugaraju telugu movie download
Mrugaraju
Mrugaraju in telugu movi megastar
Follow @fullhyderabad
Follow fullhyd.com on
About Hyderabad
The Hyderabad Community
Improve fullhyd.com
More
Our Other Local Guides
Our other sites
© Copyright 1999-2009 LRR Technologies (Hyderabad), Pvt Ltd. All rights reserved. fullhyd, fullhyderabad, Welcome To The Neighbourhood are trademarks of LRR Technologies (Hyderabad) Pvt Ltd. The textual, graphic, audio and audiovisual material in this site is protected by copyright law. You may not copy, distribute, or use this material except as necessary for your personal, non-commercial use. Any trademarks are the properties of their respective owners. More on Hyderabad, India. Jobs in Hyderabad.