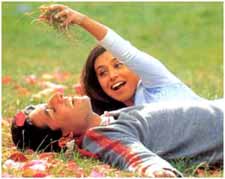 Chinmayi Sirsi / fullhyd.com
EDITOR RATING
5.0
Performances
Script
Music/Soundtrack
Visuals
NA
NA
NA
NA
Suggestions
Can watch again
NA
Good for kids
NA
Good for dates
NA
Wait to rent it
NA
A Banarasi babu jogging in Adidas sportswear and mouthing marketing mantras to local sweet vendors ("hamburgers will come and go, but jilebi is forever"), and with big dreams in his eyes and mummy's values in his heart, goes to the Big Bad City and, with the help of a scheming opportunist, becomes a Big Man. In the bargain, though, he loses mummy's aashirwaad, girlfriend's pyaar and the sanskaar with which he was brought up. So he throws it all away, and returns to the embrace of Ganga Maiiya.

"Sniff, sniff" is what the 26-year-old Goldie Behl expects of his audiences for his efforts. "Yawn" is what he gets.

And it's a pity considering the promise. "All I want is everything," scream the promos, and "everything", in Bollywoodian, is lots of moolah, a big car, a beautiful wife, a large house and then some more moolah... And that makes Bas Itna Sa Khwaab Hai a sweet title for the movie. Only, rather inappropriate, since it turns out to be less like a khwaab and more like a really bad dream.

At the risk of repeating all that, here's how the tale unfolds. Suraj Srivastav (Abhishek Bacchan), worshipper of the media king and social worker Naaved Ali (Jackie Shroff), has big dreams for himself. After a song in which he declares "bas itna sa khwaab hai" (though the rest of the song has nothing to do with these words), he packs his bags and leaves for, where else, Mumbai.

There he joins college, wins over his classmates, takes up a part-time job driving a taxi, and falls in love with Pooja (Rani Mukherji), all in one go. Obviously the books have told him that time is everything.

A seemingly stray incident at college tells the story of a student Dheeraj, who flunks the courses 'coz he can't speak or write English, and consequently commits suicide. More on this later...

When our brave boy from Benaras misses a shot at a scholarship so he can save a life, a maha impressed Naaved Ali, with the help of his secretary-cum-dance-partner Lara Oberoi (Sushmita Sen), turns him into a national hero and splashes his photographs all over the front pages of newspapers (and we thought prioritizing news was one of the first things they taught you at journalism schools!). But ambitious Suraj wants more.

More comes in the form of a television job (with a car and house attached) that Ali bestows on Suraj. A well-intentioned launch of the channel (featuring Dheeraj's story) goes awry, hitting the wrong targets, and the country rocks over some vague reservation issue. Naaved Ali uses this to climb the political ladder that leads straight to - you guessed it - the prime minister's gaddi. To add to it all, Suraj's silly cousin Meena joins the agitation and injures herself.

This leads to clumsy attempts by Suraj to remedy the situation - and since this is Bollywood, it works! Having saved the country, he returns to Benaras with wife and takes a dip in the Ganga (in his Jeans, mind you!). Whatever happened to the dreams?

The movie drags, drags and then drags a little more, running for more than three full hours. Naaved Ali's character lies mysterious and unexplained, and Suraj's metamorphosis is hardly convincing. He seems to ease into the role of Big Media Man too easily. And the songs are too many, all totally unnecessary. Except maybe for showcasing Sushmita Sen's recently acquired dancing abilities.

Abhishek Bachchan has no real acting skills to speak of, but he does manage to get by. There are some shots in Bas Itna... that deliberately try to make Abhishek look like dad, but they are few and not terribly obvious. He really needs to work on his dancing skills.

Jackie Shroff plays it the way he is asked to, and Rani Mukherji does a good job enacting Pooja. Sushmita Sen has every little to do, but her classy businessy look deserves a mention. Pran as a soft-hearted sardarji is a pleasant surprise, but only because he is Pran.

The movie bears a muted resemblance to The Devil's Advocate, but it has none of the class or the style. What Bas Itna... lacks is slickness, style and credibility, and that makes it a very average film.
Share. Save. Connect.
Tweet
BAS ITNA SA KHWAAB... SNAPSHOT
BAS ITNA SA KHWAAB HAI SNAPSHOT