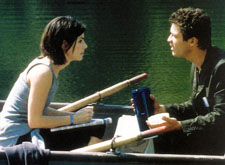 Feroz Hassan / fullhyd.com
EDITOR RATING
6.0
Performances
Script
Music/Soundtrack
Visuals
NA
NA
NA
NA
Suggestions
Can watch again
NA
Good for kids
NA
Good for dates
NA
Wait to rent it
NA
Some movies inspire, some are inspired and the rest seem like its crew was short on it. In the case of 28 Days, one feels that the scriptwriter desperately needed some, while all along the director seems to have had too much (...too bad) of it. Not a great equation by any means.

Coming after Girl, Interrupted, this movie stands utterly exposed in its rather preposterous depiction of rehab centers, and the process of rehabilitation itself. It's about as ridiculous as the idea of a man talking to animals (Dr. Dolittle, Betty Thomas' earlier film), but not half as funny. Nor does it have any drama/crisis central to it, apart from Sandra's addiction. Now, in all these years of watching movies, what did we learn, if not the fact that things almost always end well? The doubt conveyed by 'almost' is not to be considered for a movie that screams out its 'feel-good' credentials. So, that doesn't leave much to look forward to, does it?

The opening scenes, showing Gwen (Sandra Bullock) and Jasper (Dominic West) hobnobbing, make one want to grab a drink, immediately. But a sloshed Gwen disrupts her sister's wedding, crashes the marriage limo and lands herself a place in the rehab center. Enough to make one swap that Vodka for plain water!

Here on, the movie becomes as exciting as a hangover. An initially intransigent Gwen eventually eases into the process, even as we come across a host of characters that seem to be out of a comic book. The way the inmates are depicted is unintentionally amusing. And if it was intentional, then it can only be termed as shocking.

The performances are just as over-the-top, with the wonderful exception of Sandra Bullock. This isn't a charitable remark, by any means. Sandra appears unselfconscious, and her inherent edginess goes well with her character. Her pallid looks almost de-glamorize her. It can be construed as a part of an obvious attempt on the part of Thomas (the director) to get the 'look and feel' right. But one feels that she indulges a bit with the erratic camera angles and flash(es) from the past. The revelation of a troubled childhood isn't anything original.

At the end of it all, you are likely to come out bored and mildly irritated.
Share. Save. Connect.
Tweet
28 DAYS SNAPSHOT

ADVERTISEMENT
This page was tagged for
28 Days english movie
28 Days reviews
release date
Sandra Bullock, Dominic West
theatres list
Follow @fullhyderabad
Follow fullhyd.com on
About Hyderabad
The Hyderabad Community
Improve fullhyd.com
More
Our Other Local Guides
Our other sites
© Copyright 1999-2009 LRR Technologies (Hyderabad), Pvt Ltd. All rights reserved. fullhyd, fullhyderabad, Welcome To The Neighbourhood are trademarks of LRR Technologies (Hyderabad) Pvt Ltd. The textual, graphic, audio and audiovisual material in this site is protected by copyright law. You may not copy, distribute, or use this material except as necessary for your personal, non-commercial use. Any trademarks are the properties of their respective owners. More on Hyderabad, India. Jobs in Hyderabad.