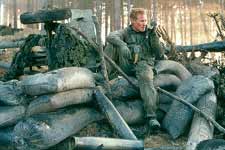 EDITOR RATING
6.0
Performances
Script
Music/Soundtrack
Visuals
NA
NA
NA
NA
Suggestions
Can watch again
NA
Good for kids
NA
Good for dates
NA
Wait to rent it
NA
Bosnia still exists, even if it didn't get a season's renewal on CNN. But it's an uneasy peace in there, as the country finally gets a chance to fly the white doves thanks to a 'Cincinnati Accord'. And self-appointed Class Monitor Uncle Sam has a role to play making sure that the peace stays that way and doesn't disintegrate like mercury at the slightest touch.

Straight out of GQ, Lt. Chris Burnett (Owen Wilson) is a rule breaking maverick who, apart from his flying skills and baby blues, has nothing much to offer the nation until about the time this flick happened. Heading out for a routine reconnaissance, he and his fellow pilot decide to house-break their new digicam (ah! a whiff of trouble, boys and their toys!) and see what seems to be a military camp. I guess this camp was for-your-eyes-only, because the yanks in the F/A-18 soon find their butts on fire dodging some pretty grizzly missiles.

Hey Burnett! Look out for that... BOOM! POW! And absolute wipeout.

Seconds later, Burnett is hanging ten from his parachute and finds himself in deep shit. His partner gets killed before his eyes by a gruesome guy called Sasha, Serbia's answer to Antonio Banderas, who seems to be able to aim straight only from a distance of 25cm and who forms part of the faction that seems to be playing mischief with the accord. This is when Burnett takes off into the woods, a la Forrest Gump sans his braces. RUN Forrest!

Acting more intelligent than one could give him credit for, he manages to radio in his base and inform his chief, Admiral Reigart (Royal Tenebaum Gene Hackman), of his predicament. Instead of splitting arteries and clogging his brains and all the while blaming India like a certain neighbor of ours, Hackman begins to devise a way to get his soldier back on base, from behind the enemy lines.

While Hackman puts his thinking cap on, he also has to fend off the NATO military guy, who seems to have the bigger picture of peace in mind and doesn't give two hoots about the moron who broke orders and waltzed into enemy territory. But Amerika being Amerika is willing to risk life, limb and the entire population and peace of an utterly devastated country to bring home a surf bum who couldn't keep his act together.

Oh well! What ensues is a whole lot of running, with mine fields going off, bullets whizzing by, tanks rolling and a general all round grim reaper theme going about. And amidst all this is the dull sharp shooter Antonio - Sasha. Duller-looking Burnett has to save his ass and then board the flight sent to pick him up. I guess Burnett had someone read the script out to him S-L-O-W-L-Y.

"Oh no, wait! There seems to be some time for one last heroic act before they whisk me off to my unhappening base!" thinks macho man as he does stuff in the hope of getting a Victoria cross or sumthin' (we'll get you a cross buddy, but you won't wear it, it will! cackle cackle!). And then he goes all Rambo toward the happy end. Oh boy!

That's the flick, folks. If you're all in the mood for some straight line action, then this is the right thing. With a storyline with as many twists as a metal rod, this one will have you guessing the end. But it does have some cool sequences and nifty camerawork.

And as for the All American Ken - doll face Burnett? Surf's up, dude!
Share. Save. Connect.
Tweet
BEHIND ENEMY LINES (HINDI) SNAPSHOT

ADVERTISEMENT
This page was tagged for
Behind enemy lines Hindi
Behind Enemy Lines columbia Full Movie Download in Hindi 720p
Behend anemy lines hindhi
behind enemy lines: colombia full movie in hindi
enemy behind the lines full movie in hindi
Follow @fullhyderabad
Follow fullhyd.com on
About Hyderabad
The Hyderabad Community
Improve fullhyd.com
More
Our Other Local Guides
Our other sites
© Copyright 1999-2009 LRR Technologies (Hyderabad), Pvt Ltd. All rights reserved. fullhyd, fullhyderabad, Welcome To The Neighbourhood are trademarks of LRR Technologies (Hyderabad) Pvt Ltd. The textual, graphic, audio and audiovisual material in this site is protected by copyright law. You may not copy, distribute, or use this material except as necessary for your personal, non-commercial use. Any trademarks are the properties of their respective owners. More on Hyderabad, India. Jobs in Hyderabad.