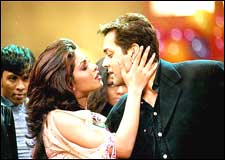 Mithun Verma / fullhyd.com
EDITOR RATING
3.0
Performances
Script
Music/Soundtrack
Visuals
NA
NA
NA
NA
Suggestions
Can watch again
NA
Good for kids
NA
Good for dates
NA
Wait to rent it
NA
Here's another Bobby Deol movie. Unlike his other movies that show him pulverizing, smoldering and killing baddies all over the town, this one is different. How? Let Bobby himself tell you...

Up first, I want to tell you that working with this unit was like working with my own family. That's why I never tried too much to act. We had a real blast while shooting.

Here's the plot. As if you cared. You came here to see explosions, blood and foul language. But since I don't care what you care about, here's the story.

My parents left me for dead when I was 2. Even my parents were 2, in number that is. That's why they left me. Like things repel. This I'm telling to lay grounds of sympathy for my behavior (brainless violence) in the rest of the movie. I'll be responsible for a lot of bursts, bloodshed and killings.

Notice the clever usage of the word 'bursts' and not 'busts' in that para. Respectable films aren't supposed to say such words. We can say many innovative words regarding a person's father, mother, sister and any other detestable blood-relative, but 'busts' is a strict no no. The best thing we can do about busts is to show you plenty.

We got this former Miss World to help us in that. She adds to the intimate, sensitive moments of the film. Like when she tries to delicately tease me to throttle her to death, by placing my hands on her tender neck. That was really sensitive, I think.

The director and the crew had to chainsaw my hands off her neck to stop that scene. What do they know? I was the one seeing her up close trying to show emotions. God! Let me at a chainsaw!

But the producer said we needed her in the film till the end. Whatever. I blew up a car to vent out my frustration. The producer then said he did not need me till the end. I blew him up, too. As I said, we had had a blast while shooting. We had quite a few.

The deal was that I went for one of the shows of this Miss World girl. She was really awesome. She really knew all those sensuous moves and hot expressions. That's when I fell for her. I killed the guy who tripped me.

But as you can see, I'm just a career criminal. All I ever did in my life was to speak tapori language, clip a few guys, and ransack a few homes. Basically, imitate what Sanjay Dutt has done to death in other movies.

Clearly, I didn't know much about class. I thought class can be bought. So, to get my hands on some major class, I decided to do a last extortion job before I hung-up my boots. My Gucci boots.

But as kismat would have it, it was the Miss World's dad who I did a job on. He got into a major mess. People thought he was responsible for a deadly, lethal drug released into the markets. And they were not talking about his daughter there. He got his pants nailed for that. And his wife jumped from a building.

When Miss World knew that I was responsible for her dad's imprisonment, she blew her top-off. Man, was that a great sight! Ahem, okay, she blew her other top-off. That's when I tried to throttle her, and the director interfered. Then I wanted to clear the mess in which her dad was, because I loved her.

I did that easily. Not loving her, but clearing her father's name. I watched Payback of Mel Gibson. So did the director. We copied everything from that. Except the best parts like the smaller length and better actors. I got to bomb a few more cars and kill a few more villains before the movie ended.

The only thing that I really hated in the movie was this dude called Ashish Vidyarthi. He made us all look pathetic. Not that we needed someone to do that, but he did. He was great in the role as a ganglord.

ADVERTISEMENT
This page was tagged for
Kismat hindi movie
Kismat reviews
release date
Bobby Deol, Ashish Vidyarthi
theatres list
Follow @fullhyderabad
Follow fullhyd.com on
About Hyderabad
The Hyderabad Community
Improve fullhyd.com
More
Our Other Local Guides
Our other sites
© Copyright 1999-2009 LRR Technologies (Hyderabad), Pvt Ltd. All rights reserved. fullhyd, fullhyderabad, Welcome To The Neighbourhood are trademarks of LRR Technologies (Hyderabad) Pvt Ltd. The textual, graphic, audio and audiovisual material in this site is protected by copyright law. You may not copy, distribute, or use this material except as necessary for your personal, non-commercial use. Any trademarks are the properties of their respective owners. More on Hyderabad, India. Jobs in Hyderabad.