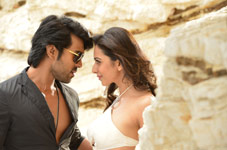 Josh / fullhyd.com
EDITOR RATING
6.0
Performances
Script
Music/Soundtrack
Visuals
5.0
3.0
4.0
7.0
Suggestions
Can watch again
No
Good for kids
Yes
Good for dates
Yes
Wait to rent it
No
It was a dull morning. From around 9:45 am, this reviewer trudged on for two hours along with his fellow patrons in the dark hall of a single screen theatre (complete with onion samosas and glass bottles of fizzy ThumsUp). We chuckled occasionally, sat up sometimes when we felt things might get interesting, but slouched back in our seats again in no time. There was a hoot or two but numerous audible yawns and sighs. The more expressive amongst us shook heads. It was a dull morning.

And then, a couple of minutes after noon, the festivity sprang up. Everyone was off their seats, and there was loud clapping, even louder hooting, and people jumping and screaming in joy. The hitherto lethargic crowd came alive. For most of us, it was nostalgic heaven. To see Chiranjeevi own the center of a frame like he always did, to watch him get drenched in celebratory background music, to have him suspend all our disbelief when he sends ruffians flying with the merest touch of his fist, it was like the good old days again. For all of five minutes, it was a happy roaring crowd.

Plot-wise, Ram Charan Teja plays Karthik alias stuntman Bruce Lee who sacrifices his education to help his sister (Kriti Kharbanda) pursue her dreams. His father (Rao Ramesh), unaware of his son's sacrifices, gives him grief over his career choices. In due course, a chirpy video game developer Riya (Rakul Preet Singh) conveniently (as it happens in Srinu Vaitla's movies) believes that Bruce Lee is a police officer, and he keeps up the pretense to get cosy with her. In this process, he comes to be at loggerheads with crime-lord Deepak Raj (Arun Vijay).

The rest of the movie involves Bruce Lee plotting with (we kid you not) the Director General of the Intelligence Bureau to bring the downfall of the villain. This, of course, consists of all possible - umm, sorry, all impossible - contrivances to include Brahmanandam as Suzuki Subrahmanyam, Posani as Macha Mutyam, Jaya Prakash Reddy as Danger David (he does it well) and the rest of the coterie in inconsequential and meaningless roles making silly attempts to generate humour.

Ram Charan Tej is super-flexible with his body and shines through in all the songs and fight sequences. But he is stiff as a staff when it comes to emoting. Bruce Lee's plot offers plenty of scope for a tear-jerking performance and Ram Charan tries, but it isn't enough. The reluctance to open up and bring out emotions - it's a strange ailment star kids seem to suffer from.

The actors associated with the emotional subplots, however, make it work. Rao Ramesh and Pavitra Lokesh, as expected, come up with reliable performances as the parents. The surprise is Kriti Kharbhanda as the elder sister. Armed with an ethnic and beautiful wardrobe, she comes across as a sight for sore eyes, and makes the best of it by also turning in a decent performance. Or maybe we just felt so because the other girl in the plot (Rakul Preet Singh looks like a million bucks) attracts more attention to her abs than her expressions.

The rest of the cast does very little. Brahmanandam is wasted, and so are Mukesh Rishi, Arun Vijay (he has great screen presence), Vennela Kishore, Posani and Prudhviraj. All great actors, let down by unpardonably silly writing.

Srinu Vaitla needs a break. Kona Venkat (writer), too. They've been churning out the same stuff over and over again for years now. It was fun while it was fresh, but when you see unimaginative rhyming schemes, absurd nomenclature, and monstrously implausible contrivances being passed off as comedy for the umpteenth time, it gets tiresome.

All of S S Thaman's catchy but unmemorable tunes or Manoj Paramahamsa's slick visuals or M R Varma's snazzy cuts or the several crores of rupees poured in by D V V Danayya can't seem redeem the tiring repetitiveness of Bruce Lee. However, one man can. Rather, one star can. When Chiranjeevi springs on to the screen, you'll have forgotten everything you were complaining about. It can all suddenly seem worth it. Though that's your choice to make - is it worth it?
Share. Save. Connect.
Tweet
BRUCE LEE - THE... SNAPSHOT
BRUCE LEE - THE FIGHTER (TELUGU) SNAPSHOT 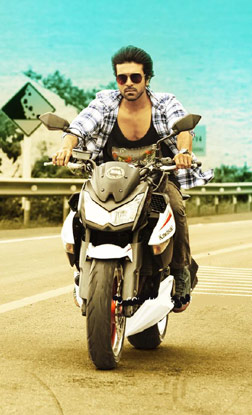 ADVERTISEMENT
This page was tagged for
Bruce Lee - The Fighter (Telugu) telugu movie
Bruce Lee - The Fighter (Telugu) reviews
release date
Ram Charan Tej, Rakul Preet Singh
theatres list
Follow @fullhyderabad
Follow fullhyd.com on
About Hyderabad
The Hyderabad Community
Improve fullhyd.com
More
Our Other Local Guides
Our other sites
© Copyright 1999-2009 LRR Technologies (Hyderabad), Pvt Ltd. All rights reserved. fullhyd, fullhyderabad, Welcome To The Neighbourhood are trademarks of LRR Technologies (Hyderabad) Pvt Ltd. The textual, graphic, audio and audiovisual material in this site is protected by copyright law. You may not copy, distribute, or use this material except as necessary for your personal, non-commercial use. Any trademarks are the properties of their respective owners. More on Hyderabad, India. Jobs in Hyderabad.