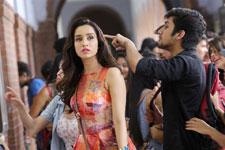 Vaishnavi Kulkarni / fullhyd.com
EDITOR RATING
4.5
Performances
Script
Music/Soundtrack
Visuals
5.0
4.0
6.0
4.0
Suggestions
Can watch again
No
Good for kids
No
Good for dates
No
Wait for OTT
Yes
In keeping with the tradition of taking unabashedly mediocre books and churning out even sorrier movies based on them, director Mohit Suri brings you Half Girlfriend, a love story with each half sorely lacking in both the love and the story. Unlike other film adaptations of Chetan Bhagat's books (some of which, like 2 States, are fairly decent), Half Girlfriend falls to new lows, and is a fitting tribute to its print-based namesake, which is just as schlocky.

So you meet Madhav Jha (Arjun Kapoor), a young lad from Bihar in the middle of an interview with who seem to be the snobbiest and snootiest professors in India. They stress the importance of speaking English over and over, and yet are blown away by Madhav's entirely Hindi speech on his dream of a bright future for Bihar. Just as you begin to think that perhaps the protagonist is actually a visionary and driven man, you are brought crashing back when he proceeds to get side-tracked almost immediately by the first pretty face he sees.

Enter Riya Somani (Shraddha Kapoor), a basketball player who most certainly will quit unless a random bystander tells her she plays well in a garbled version of English that is more broken than Riya's stalker radar. And stalker is precisely what Madhav turns into - he stares at her for uncomfortably long moments, follows her around as furtively as a detective, peeps through windows into her moments of solitude, and is generally creepy. In an alternate, more sensible reality, Riya would have gotten a restraining order against him. Since this is Bollywood glorifying harassment, physical violence and stalking as usual, the two become basketball buddies.

After receiving a slew of mixed signals from the girl of his dreams, Madhav finally sees her designate herself as his "half girlfriend". Aside of one interpretation by Madhav's roommate Shailesh (Vikrant Massey) that you would probably be able to figure out on your own, the meaning of this relationship status is never defined. However, the phrase is thrown about enough over the course of the movie to become annoyingly repetitive.

Being a glass-half-empty kind of guy, Madhav is unsatisfied with this ambiguity, and makes up his mind to take matters into his own hands, following the nonsensical advice of his (otherwise sensible) roommate - he lures Riya into his room under the pretext of letting her rest, and takes her presence as an open invitation to get physical with her (he seems to not realize that consent is a thing that exists and is important).

When she refuses, he decides that screaming at her and hurting her by physically shoving her away is an excellent seduction technique. Riya, shaken by the Neanderthalian characteristics her friend suddenly exhibits, and reminded of her parents' abusive relationship, understandably leaves.

What comes next is a classic cliché - the independent young woman somehow agrees to tying the knot at 19 to a man she barely knows, the hero is left heartbroken, and apparently everyone's college fees go down the drain.

Half Girlfriend is a disappointment. There are certain moments of humour that manage to get you to crack half a smile, but laughter is mostly due to the film's more unintentionally-ridiculous aspects. Riya keeps walking out into the pouring rain with a pretentiously dreamy expression. If she ever carries books, they must be water-resistant. Their prestigious university is less of an educational institution and more of a live-action Tinder - no one ever has classes, or carries books, or even studies. The movie has some glaring inconsistencies, too - even after 3 years in a college that boasts of its emphasis on English, Madhav's language skills are still as weak as ever.

Arjun Kapoor makes his way through most of the film without ever varying his expression of perpetual boredom and annoyance. He has his moments (like his accent and manner of speaking Hindi), but they are few and far between. Shraddha Kapoor is far too affected and forced in her portrayal of the troubled heroine, never invoking any real emotions in the audience.

Seema Biswas (Madhav's mother) is effective in her short role as the loving but strict mother and social worker. Rhea Chakraborty (who plays Madhav's love interest for a short while) makes her character appear to be a far better match for the hero than Riya ever appears to be. She is sweet and genuine. Vikrant Massey might have been cast in the lead role instead - he is far more likable and dashing as the sidekick than Arjun Kapoor is at any point as Madhav.

The musical score is the only aspect of the movie that is not a total basket case. The upbeat songs are catchy, and the slow songs give the film the tone which its plot and acting don't.

The best part of the visuals is undoubtedly the comically animated head of Bill Gates. It looks more like a badly-stuck sticker than decent animation that technology today is capable of, and has you in splits. It is perhaps even more effective as fodder for internet memes than the iconic "Sir, myself from village area" line.

Half Girlfriend is a film that makes you laugh and cry - you laugh at the folly of wasting your time on it, and cry tears of exasperation. If you want to watch people playing basketball and falling in love, we recommend renting Kuch Kuch Hota Hai instead - at least that one has some nostalgia added in.
Share. Save. Connect.
Tweet
HALF GIRLFRIEND SNAPSHOT 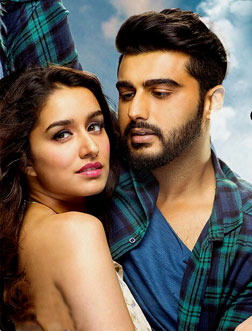 ADVERTISEMENT
This page was tagged for
Half Girlfriend hindi movie
Half Girlfriend reviews
release date
Arjun Kapoor, Shraddha Kapoor
theatres list
Follow @fullhyderabad
Follow fullhyd.com on
About Hyderabad
The Hyderabad Community
Improve fullhyd.com
More
Our Other Local Guides
Our other sites
© Copyright 1999-2009 LRR Technologies (Hyderabad), Pvt Ltd. All rights reserved. fullhyd, fullhyderabad, Welcome To The Neighbourhood are trademarks of LRR Technologies (Hyderabad) Pvt Ltd. The textual, graphic, audio and audiovisual material in this site is protected by copyright law. You may not copy, distribute, or use this material except as necessary for your personal, non-commercial use. Any trademarks are the properties of their respective owners. More on Hyderabad, India. Jobs in Hyderabad.