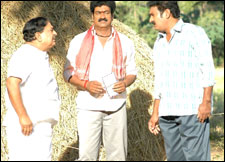 Krishna KBS / fullhyd.com
EDITOR RATING
2.0
Performances
Script
Music/Soundtrack
Visuals
6.0
3.0
3.0
4.0
Suggestions
Can watch again
No
Good for kids
Yes
Good for dates
No
Wait to rent it
No
Oliver Stone once said, "One of the joys of going to the movies was that it was trashy, and we should never lose that." The reason for giving that quote is not just to fill up the number of lines (of course, that is a bonus!), but that you might need to keep remembering it while watching this movie.

Donga Sachinollu is about two imbecile brothers â€" Ramudu (Raghu Babu) and Kamudu (Krishna Bhagwan). They live in a village with their uncle and aunt (Chandra Mohan and Telangana Sakuntala), and happen to be bachelors -- not by choice, but because no one is willing to marry them.

Their elder sister is married to a rich businessman (Vinod Kumar), and she takes them to live with her in Hyderabad. And charmed by their naivetÃ©, she decides to marry her daughter Kavya (Rambha) to one of them.

However, before she can put this act of hers into motion, she and her husband die in an accident. But before her death she asks her daughter to marry one of her uncles. The rest of the movie is about whether Kavya honours her motherâ€™s last wish.

Raja Vannem Reddy makes a date with tedium and tepidity with these two paragraphs of a story, by adding whatever he thinks makes for comedy. That would have been fine with us, if his comedy carried on in the vein of his hit film Kshemanga Velli Labhanga Randi. But, alas, that is not meant to be. The director in all probability enjoyed the scene where Kovai Sarala beats up Brahmanadam in the aforementioned movie so much, that he sprinkles, actually floods, this movie with scenes of people beating each other up in the name of comedy.

Yes, it is true that the word slapstick originated from the clownish act of people beating each other up. But the problem lies in the fact that farce is like a tightrope act, and any slip-up has disastrous consequences. Which is the case here.

As for the performances, all of them are just about adequate. And as you can guess, there is nothing to rave about the music or the technical values â€" the movie was made on a shoestring budget, and it shows all through.
Share. Save. Connect.
Tweet
DONGA SACHINOLLU SNAPSHOT

ADVERTISEMENT
This page was tagged for
donga sachinollu
dongasachinollu movie
Donga Sachinollu telugu movie
Donga Sachinollu reviews
release date
Follow @fullhyderabad
Follow fullhyd.com on
About Hyderabad
The Hyderabad Community
Improve fullhyd.com
More
Our Other Local Guides
Our other sites
© Copyright 1999-2009 LRR Technologies (Hyderabad), Pvt Ltd. All rights reserved. fullhyd, fullhyderabad, Welcome To The Neighbourhood are trademarks of LRR Technologies (Hyderabad) Pvt Ltd. The textual, graphic, audio and audiovisual material in this site is protected by copyright law. You may not copy, distribute, or use this material except as necessary for your personal, non-commercial use. Any trademarks are the properties of their respective owners. More on Hyderabad, India. Jobs in Hyderabad.