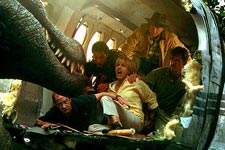 Chinmayi Sirsi / fullhyd.com
EDITOR RATING
8.0
Performances
Script
Music/Soundtrack
Visuals
NA
NA
NA
NA
Suggestions
Can watch again
NA
Good for kids
NA
Good for dates
NA
Wait for OTT
NA
Humankind's fascination, and even obsession, with the dino mystery might have something to do with our fear of a similar fate. But then again it could just be their staggering size and otherness that makes us want to know more, to explore their lives and their death. Steven Speilberg's and Micheal Crichton's gift to mankind is an incredible movie that brought the dinos to the average movie-goer - a case of bringing masses to the masses.

The theory of evolution and that of natural selection dictates our world, and Jurassic Park is as much a story about tampering with nature as it is about scaring the wits out of audiences by parading very real-looking dinos all over the place.

John Hammond (Richard Attenborough) is a dreamer, a man who has the vision and the resources to create the most amazing amusement park in the world. To convince his investors about the validity and the invulnerability of the scheme, he invites dino expert Allen Grant, biologist Ellen Slater, mathematician or chaotician Ian Malchom and the investors' lawyer to visit the park so they can approve of it.

Dinosaurs are what the guests find in the park - apparently Hammond's scientists found a way to bring them back with the help of DNA taken from a mosquito fossil from the Jurassic age, with frog DNA filling the gaps in the genetic code. As Hammond shows off his tremendous achievement, his invitees have second and third thoughts, especially Ian Malchom, whose discourses on the chaos theory are sometimes more interesting than the dinos.

Things start to go very wrong when Hammond's lazy and crooked computer programmer shuts down the security systems so he can steal some dino embryo for a competitor. Power shutdown renders the electrified fences powerless and this gives the T-Rex, a huge, dangerous meat-eating dinosaur, enough opportunity to go looking for dinner and entertainment. What follows is a situation you wouldn't want to be in the midst of, with the T-Rex and the highly intelligent and mean velociraptors getting loose and ready to have some fun. Hammond's grandchildren, Tim and Lex, are bang in the middle of danger.

The actors do their part well, but they haven't got a whole lot to do. The real stars, of course, are the lizards. The technical wizardry in the film is absolutely mind-blowing.

Jurassic Park created history when it was released, and we do think almost everyone with access to movies has seen it. With a PG rating, it makes for particularly good entertainment for kids. As for those of you interested in the chaos ideas and questions about evolution that the movie arises, reading the book by Micheal Crichton (who wrote the screenplay along with David Koepp) might be a good idea. Many finer points of the theory have been sacrificed to the sheer power of the dinosaurs, and a science-fiction freak might find Jurassic Park a little hollow and overly dependent on the visual appeal.

But Jurassic is not a movie to be missed, and if you haven't seen it, this might be a good time to catch up.
Share. Save. Connect.
Tweet
JURASSIC PARK SNAPSHOT

ADVERTISEMENT
This page was tagged for
Jurassic Park english movie
Jurassic Park reviews
release date
Sam Neill, Laura Pern
theatres list
Follow @fullhyderabad
Follow fullhyd.com on
About Hyderabad
The Hyderabad Community
Improve fullhyd.com
More
Our Other Local Guides
Our other sites
© Copyright 1999-2009 LRR Technologies (Hyderabad), Pvt Ltd. All rights reserved. fullhyd, fullhyderabad, Welcome To The Neighbourhood are trademarks of LRR Technologies (Hyderabad) Pvt Ltd. The textual, graphic, audio and audiovisual material in this site is protected by copyright law. You may not copy, distribute, or use this material except as necessary for your personal, non-commercial use. Any trademarks are the properties of their respective owners. More on Hyderabad, India. Jobs in Hyderabad.