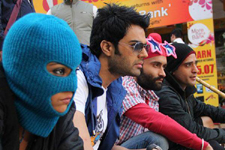 Neha Mathur / fullhyd.com
EDITOR RATING
5.0
Performances
Script
Music/Soundtrack
Visuals
6.0
4.0
4.0
6.0
Suggestions
Can watch again
Yes
Good for kids
No
Good for dates
Yes
Wait for OTT
Yes
A bunch of murdered hackers in Delhi. Cops still using dinosaur technology. Cyber crime in the air. Who you gonna call? Mickey "Virus" Arora! By day, he mooches around at his mother's grocery store, but come twilight, and this vella enters cyberspace, as none other than his own creation, (wait for it) Kung Fu Chameli! No, we are serious.

Rookie director Saurabh Varma tries to spin an original story revealing the underbelly of the virtual world ripe with criminal hackers and breached firewalls, all in a small budget but promoted-by-big-stars Bollywood style comic thriller. So here, hacking is the villain (as understood in common parlance), and not the super computer-wizardry of MIT undergraduates in the 1960's.

Through these loafers who hang around doing next to nothing, we are treated to the very real sights and sounds of young Delhi. There is a mobile fast-food van, inappropriately named "Michael Jackishen Chinese Corner". The film takes us through the by-lanes of Nehru Place, chock-full of tiny computer stores, a mecca for techies and geeks.

Almost every line spoken by the characters reeks of Delhi. This is a good thing if you are a native of the capital city. But many of the "in-house" one-liners will be lost on the Hyderabadi viewer.

While we do get a generous whiff of Dilli ki hawa, we are left wondering what the storyline aims to achieve. Mickey's wayward life, as well as the plot, jumpstart again when ACP Siddhant Chauhan (Manish Chaudhary) and Inspector Bhalla (Varun Badola) coerce him into helping solve the case of the murdered hackers.

As the story gains ground and the suspense builds, our hopes for the movie are dashed yet again, owing to the blossoming love between Mickey and the woman of his dreams, Kamayani George (Elli Avram). Here again, Varma's Mickey Virus tends to drag as love-struck Mickey attempts to transform his Kung Fu Chameli into Kung Fu bhabhi.

It is only with the second half of the film that the plot becomes engrossing. Having taken the genre label (comic thriller) quite literally, the director and the writers have neatly divided the film, such that comedy pervades the first half while thrills are reserved for the post-interval bit.

As Mickey gets sucked into multiple cyberspace conspiracies, our faltering attention returns, and the story draws us in. The menace of unknown cyber criminals seems real as does the pursuit on foot, aided by a phone GPS. With our hero in jeopardy, we are left to wonder whether our "last virus standing" will survive the intrigue.

The fight stunts are hacker-worthy, by which we mean, they are pedestrian and therefore believable. While we have all witnessed TV anchor Manish Paul's comic antics (and do so in the first half of the film) his histrionics as cornered bait are worth a mention.

Unfortunately, as the suspense rises, the script begins to unravel, and the denouement staged in the Nehru Place underground parking, is a big letdown. The incredibly long, verbal exposition, tying all the knots, is tedious. Seriously! Ever heard of show-and-tell rather than tell, tell, phew! and tell some more!

Manish Paul carries much of the film on his shoulders, and he does it well. The performances by the supporting cast, Puja Gupta and Manish Chaudhary, are strong, though Varun Badola as the rustic Inspector takes the cake. It is the temperamental script that forms the weak link.

The music is mediocre, as is the film itself, which never really takes off from being just-an-amusing-movie to something truly novel. While Mickey Virus tries to portray the seedy side of the hacking world, its representation is crude as are its CGI effects.

Do not get us wrong - Mickey Virus is entertaining. Just not as much as you wished it to be.
Share. Save. Connect.
Tweet
MICKEY VIRUS SNAPSHOT 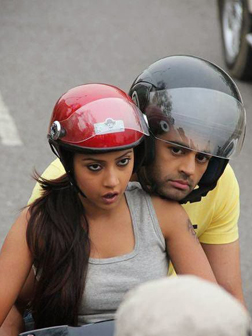 ADVERTISEMENT
This page was tagged for
JACKISHEN
Mickey Virus hindi movie
Mickey Virus reviews
release date
Manish Paul, Elli Avram
Follow @fullhyderabad
Follow fullhyd.com on
About Hyderabad
The Hyderabad Community
Improve fullhyd.com
More
Our Other Local Guides
Our other sites
© Copyright 1999-2009 LRR Technologies (Hyderabad), Pvt Ltd. All rights reserved. fullhyd, fullhyderabad, Welcome To The Neighbourhood are trademarks of LRR Technologies (Hyderabad) Pvt Ltd. The textual, graphic, audio and audiovisual material in this site is protected by copyright law. You may not copy, distribute, or use this material except as necessary for your personal, non-commercial use. Any trademarks are the properties of their respective owners. More on Hyderabad, India. Jobs in Hyderabad.