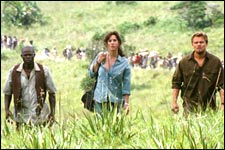 Samrat Sharma / fullhyd.com
EDITOR RATING
6.0
Performances
Script
Music/Soundtrack
Visuals
NA
NA
NA
NA
Suggestions
Can watch again
NA
Good for kids
NA
Good for dates
NA
Wait to rent it
NA
Every year, it seems, Hollywood wakes up to Africa and the crisis it faces, and we get sensitively made films on various themes, but always the same topic – Africa in difficulty. After Hotel Rwanda and The Constant Gardener, you'd think it is Blood Diamond's turn to train our eyes towards Africa. You'd be wrong. You may also think that this is a film that is the story of Leonardo DiCaprio and his adventures, being as he is at the center of the film and in almost every frame. You'd be wrong again.

Blood Diamond is a by-the-books adventure flick, which is really the story of Djimon Hounsou, and I can't think of one good reason why DiCaprio's character has been made the center of the whole story except that the performance is awesome. Edward Zwick is back at telling the story of a foreign land and its oppressed people through the eyes of a dark yet good-at-heart white guy. Once more, he makes the white guy the center piece, while the beleaguered minority has the actual story going around them.

The story opens in Sierra Leone, where a fisherman called Solomon Vandy (Djimon Hounsou) lives with his family when the civil war breaks out. In a raid by the rebel forces, he gets separated from his family and is forced to work in the diamond pits while his family become refugees. There, he finds and hides a huge pink diamond, just as he is about to be shot by the Colonel when this is discovered. He is captured by the army, and comes across Danny Archer (Leonardo DiCaprio), who is a Zimbabwean smuggler and mercenary.

Danny is there because he got caught trying to smuggle conflict diamonds – illegally sold stones that fund civil wars in Africa. In prison, he hears of the big diamond, and decides to use Solomon to get it. He promises him he will get him to his family in return for the location of the diamond. Of course, he needs the diamond because he owes Colonel Coetzee (Arnold Vosloo) big time.

Heard this one before? Of course you have. A likeable rogue helping a straight man through trouble to serve his own purpose, and the perilous journey they must face. But the fault of the screenplay lies not in the predictability of the main plot but the way it crams as many clichés as it can in one barrel and revels in it. Every time – every damn time – Solomon gets into trouble and is about to get maimed, shot, killed etc., deus ex machina intervenes, and the boys tumble to the next set piece towards the climax. To top that, a young American journalist (Jennifer Connelly) joins them and pontificates on the state of Africa.

Connelly's Maddy Bowen is so unnecessary to the main-road-movie-like structure, that her presence actually weakens the character that Dicaprio works so hard to create. There is a romantic comedy bit thrown in for the two of them, and I can't remember another movie so inept at creating any sort of connect to the attraction between a man and a woman.

Dicaprio delivers a great performance in an underdeveloped role – he creates a believable mannerism and a note perfect accent in his portrayal as the blackest of black characters (only, he is white – get it?) in the film. His presence and star power alone sucks you right into the character, and it is interesting to watch him go through this role with so much enthusiasm. Hounsou on the other hand over emotes and seems plain crazy to be doing the things he does.

What really hurts, though, is that in this sub par entertainer, there is actually a very good Africa movie hidden somewhere. The almost documentary like way in which Zwick shows us the way voters are mutilated, families killed, children inducted in the rebel forces and so on, is fascinating to watch and is dripping with authenticity. Despite Connelly's annoying exposition, the film has a great eye for the visuals of Africa, both the beautiful and the ugly.

But all of this is dumbed down by a film that doesn't know what it wants to say (beyond the obvious point of course), and a confused screenplay. There are so many things trying to take place on the screen at the same time, that some of the best bits get drowned in all the cacophony of the bad. Still, it is entertaining in its own right, and exemplary cinematography makes it a pleasure to watch – and that is why the stupidity of the cliché-ridden screenplay hurts. This could have been one of the greats, but simply contends itself with being halfway decent.
Share. Save. Connect.
Tweet
BLOOD DIAMOND SNAPSHOT

ADVERTISEMENT
This page was tagged for
Blood Diamond english movie
Blood Diamond reviews
release date
Leonardo DiCaprio, Djimon Hounsou
theatres list
Follow @fullhyderabad
Follow fullhyd.com on
About Hyderabad
The Hyderabad Community
Improve fullhyd.com
More
Our Other Local Guides
Our other sites
© Copyright 1999-2009 LRR Technologies (Hyderabad), Pvt Ltd. All rights reserved. fullhyd, fullhyderabad, Welcome To The Neighbourhood are trademarks of LRR Technologies (Hyderabad) Pvt Ltd. The textual, graphic, audio and audiovisual material in this site is protected by copyright law. You may not copy, distribute, or use this material except as necessary for your personal, non-commercial use. Any trademarks are the properties of their respective owners. More on Hyderabad, India. Jobs in Hyderabad.