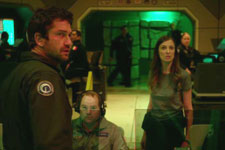 T J Reddy / fullhyd.com
EDITOR RATING
3.0
Performances
Script
Music/Soundtrack
Visuals
3.0
3.0
1.0
7.0
Suggestions
Can watch again
No
Good for kids
No
Good for dates
No
Wait to rent it
Yes
This movie has the line "That's a Geostorm" or "Countdown to Geostorm" about 10 times through its one hour and 49-minute runtime, and for my part I laughed out loud every time someone said that word. In all honesty I was expecting the phrase "What is this? Some kind of Geostorm?" to be mouthed by one of the characters. And if you get that easy reference, we can be friends.

GEOSTORM. Seriously, say it out loud and then ask yourself how a group of suits at Warner Bros thought naming a film this was in any way a good idea. Isn't this the same studio that made It and Wonder Woman this year and consequently all the money in the world? Simply put, this is a film that asks you to buy Gerard Butler as the world's foremost scientist (and more egregiously, as an American) with a straight face. Wait a minute; this movie is trying to make you waste your brain cells actually thinking about it.

I understand being objective should be a part of a reviewer's job, but reviewers are human, too. Every time I watch something so uninspired and lazy, I look up to the skies at the Divine Soul supposedly housed there asking him why the GEOSTORM isn't happening to me specifically so that I could meet my demise and then him and subsequently ask him why $120 million dollars were spent on this rendezvous with stupidity instead of being used for charity or, better yet, scientific research to help avert climate change. Damn it, this movie is making me think again.

*Sigh* Let's just get this over with.

Frankly, Geostorm has an intriguing premise. To combat climate change and the devastation it entails, the governments and brightest minds of the world come together to design and engineer Dutch Boy - a space station that controls a massive web of satellites which in turn control the Earth's weather and consequently its climate. But as we have learnt time and time again, all good things must come to an end, and with that, the satellites, the space station and some of the key people running them all start to either malfunction or die in increasingly hilarious ways that include getting shot out of the space station, getting hit by cars and general incompetence reminiscent of the glory days of Vaudeville.

Looking into why his film has no plot beyond this wafer-thin premise is "Chief Architect" Jake Lawson (Gerard Butler still riding on that goodwill from 300 I see) in space and his brother Max Lawson (Jim Sturgess) on the ground. In between spouting some of the worst lines ever put on screen, the brothers "Law"son (no one put in any effort, did they?) uncover a ploy with all the political intrigue and implications of Watergate but which due to its sheer idiocy and improbability, does not even qualify to be under John Oliver's umbrella of Stupid Watergate.

If you are familiar with the previous projects of Dean Devlin and his partner Roland Emmerich, your work here is done. You've seen Independence Day and its sequel, Godzilla (1998), The Day After Tomorrow, 2012, 10,000 BC etc. all the while knowing what to expect from a film coming out of this stable of filmmakers. Like its predecessors, Geostorm is a dumb, loud, effects-driven, dog-saving, jargon-spewing, unoriginal film with an incredibly self-serving political agenda, the only ray of positivity being that it is mercifully short. I'll let you in on some sage investment advice for your time and money in just a bit, but first I need to fulfil my duties as a reviewer by addressing the performances and technical aspects of the film.

Firstly, the performances: Gerard Butler and his funky bunch of multi-cultural astronauts and agents are in the film for a paycheck and to see to it that every race, religion, gender and ethnicity is represented so that no audience member on the global box office is left disappointed. None of them is distractingly bad but none of them has the charm to carry a film this bad either. Watching veteran heavy-hitters Ed Helms and Andy Garcia phone in performances left a pit in my stomach I'm yet to recover from.

Then, the score is substituted with noise and the default music they teach you in music school on your first day there. The action set-pieces depicting wanton destruction of the world are few and far between, which leave massive chunks of the movie with needlessly complicated plots unfolding on screen. And the destruction scenes are wildly similar to those in The Day After Tomorrow, Independence Day and 2012, just without Jake Gyllenhaal, Will Smith and John Cusack.

Seeing that I've concluded my duties, I want to now help you understand how this film is conning you into spending your hard-earned money. Geostorm has absolutely tanked at the US box office by making only 17 million against a 120 million budget as of 27th October 2017 (after a week of being released there) - and the makers seem to have known this would happen; the film employs actors and settings from every nook and corner of the world to enhance its worldwide appeal. Think of the movie as a China-made knock-off of an iPhone. And the film is seemingly succeeding with this strategy as its international box office stands at 52 million as we speak.

I recall standing up for the national anthem as I left the cinema and thinking to myself, if I am anyway going to watch a needlessly dumb movie, I will at least fulfil my duty to the nation and be patriotic by watching a bad movie made in India.
Share. Save. Connect.
Tweet
GEOSTORM (TELUGU) SNAPSHOT 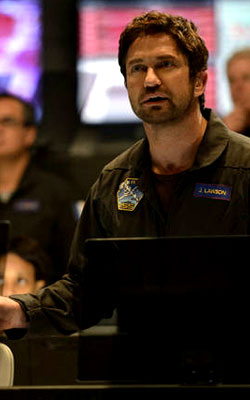 ADVERTISEMENT
This page was tagged for
geostorm telugu dubbed movie hd download
geostorm full movie in telugu download
geostorm telugu dubbed full movie
geostorm Telugu download
geostorm telugu dubbed movie watch online
Follow @fullhyderabad
Follow fullhyd.com on
About Hyderabad
The Hyderabad Community
Improve fullhyd.com
More
Our Other Local Guides
Our other sites
© Copyright 1999-2009 LRR Technologies (Hyderabad), Pvt Ltd. All rights reserved. fullhyd, fullhyderabad, Welcome To The Neighbourhood are trademarks of LRR Technologies (Hyderabad) Pvt Ltd. The textual, graphic, audio and audiovisual material in this site is protected by copyright law. You may not copy, distribute, or use this material except as necessary for your personal, non-commercial use. Any trademarks are the properties of their respective owners. More on Hyderabad, India. Jobs in Hyderabad.