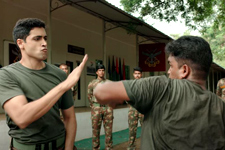 Sai Tulasi Neppali / fullhyd.com
EDITOR RATING
6.5
Performances
Script
Music/Soundtrack
Visuals
6.5
6.0
6.0
7.0
Suggestions
Can watch again
No
Good for kids
No
Good for dates
No
Wait for OTT
Yes
In one of his many pre-release interviews, actor Adivi Sesh recalled his motivation for making Major. He remembered the visceral reaction he had to story of Major Sandeep Unnikrishnan, the commando who died fighting terrorists during the 26/11 attacks in the Taj Mahal Palace hotel in Mumbai. Sesh went on to describe seeing the Major's photo for the first time, stunned by how alike they looked. Sharing the same boyish charms, hawkish nose and perfect set of pearly whites, they were like doppelgängers. "We could have been brothers," Sesh said. He was so moved, he decided to make it his mission to bring his story to the screen. Major was thus born, with Adivi Sesh playing Sandeep.

To that end, Major is singularly focused on one man. In a chronological fashion, we see Sandeep's life story unfold. We see an exposition of his psyche -?his values, ethics and decisions - that led him towards that fateful moment at the Taj, when he volunteered to go a suicide mission. "Don't come up, I'll handle them," he says to his team of commandos, before martyring himself to the fray of bullets and explosions, killing the terrorists and saving fourteen hostages.

His life is peppered with clues to the evolution. We see a young, cherubic Sandeep excited to visit the inmates of the jail where his uncle works. "I like their uniforms," he says brightly to his amused mother. We see him atop his father's shoulders, watching a Navy parade - their sure-footed marching, their staunch faces, and the insignia on their uniforms, leaving a lasting impression on him. We see him fascinated by Arnold Schwarzenegger's bang-bang movies.

But it's not just these childish indulgences that set him down the soldier's path. He has that rare gift to be - despite the great personal cost?- a protector. He is the child who steps between his sister and a stray dog, disregarding his own paralysing fear. He is the man who instinctively runs to protect his neighbour from her abusive husband, ignoring the threat of an acid attack.

So when the time comes to pick a career path, all other mainstream options are moot. He is a soldier, almost fully formed, sure of his life's purpose - to protect at the highest level, to protect his country. Leaving behind his nervous parents, and his supportive high school sweetheart Isha (Saiee Manjrekar), he enlists in the National Defence Academy. He rises through the ranks to become a Major, and by the time he is called upon to defend the Taj hotel, he is a training officer at the prestigious 51 Special Ops National Security Guard.

The first half of Major, which depicts Sandeep's childhood, has plenty of foreshadowing. Over and over again, we see Sandeep as the saviour, protector, soldier and patriot. Adivi Sesh, who also wrote the story and script, leans on one too many scenes to convince us of Sandeep's morality and idealism, forgetting to make him a full three-dimensional human.

Even Sandeep's romance is elaborately choreographed, à la those treacly 2000s Telugu romcoms like Arya and Bunny. In one farewell scene, Isha drops her umbrella, runs in the pouring rain, jumps into his moving bus and gives him a goodbye kiss. No one is moved by this uninventive gesture. As Isha, Saiee Manjrekar is a puzzling choice, her acting pasty and colorless as dough. As Sandeep's parents, though, Prakash Raj and Revathi are nearly flawless.

By the time the interval rolls around, there is a palpable feeling of impatience in the theatre for the real story to begin. And the film does start delivering. Scenes depicting the NSG commandos preparing to enter and secure the Taj - dressing in all-black combat gear, loading ammunition into warbirds, landing in Mumbai and hurtling in their jeeps towards the attack zone, as they set up barricades and take formations to enter the hotel - are powerfully shot, and some of the best bits of the movie. Another harrowing but memorable scene is one where the attackers open fire on unsuspecting hotel guests - it is a shocking reminder of the true scale of evil that India experienced that day in 2008. Sobita Dhulipala, who plays Pramoda Reddy, a hotel guest hiding from terrorists, is the emotional anchor of an otherwise uneven second half.

Ultimately, however, the movie rests primarily on Adivi Sesh's shoulders. As an actor, he is devastatingly handsome - if this were a recruitment ad for the Indian Armed Services, a more perfect model there wouldn't be. However, I confess, I found him to be distractingly photogenic. Even in the climax scene, where Sandeep comes face-to-face with terrorists, who poke, prod and shoot at him continuously, as if he were a voodoo doll, Sesh maintains a certain twinkle in his eye, barely concealing his smoulder, the corners of his lips slightly upturned in a smirk, as if this is all just play.

Towards the end, the script and screenplay become less fact and more fantastical. Sesh tries to craft several rousing moments to tap into the audience's patriotic sentiments - some work, but many are overwrought. It's one too many scenes that pay homage to Sandeep's heroism and wit. As if the entire Operation Black Tornado was planned and executed by one man. In line with the uneven pacing of the movie, the background score, too, soars and dips, giving us whiplash.

Major, ultimately, is lacking in the very element that it originated from - heart. Only sporadically does it show any real emotion and warmth, like that gut-wrenching scene when Sandeep's parents learn of his death on the news. Adivi Sesh no doubt set out to create an ode to Major Sandeep's life, but that he chose to use cold, commercial ploys to do so, is a bit of a shame.
Share. Save. Connect.
Tweet
MAJOR SNAPSHOT 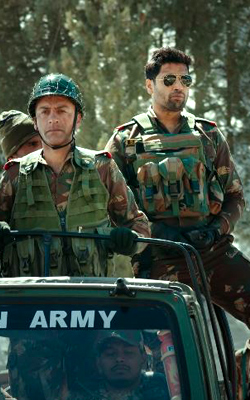 See MAJOR full details
MAJOR USER REVIEWS
1 - 2 OF 2 COMMENTS
POSITIVE  |  NEGATIVE |  NEWEST  |  OLDEST  |  MOST HELPFUL  |  LEAST HELPFUL
USER RATING
5.0
1 USER
Performances
Script
Music/Soundtrack
Visuals
NA
NA
NA
NA
Can watch again - NA
Good for kids - NA
Good for dates - NA
Wait for OTT - NA
Tyler Moore on 9th Jun 2022, 7:58am | Permalink
Interesting review. Reactions from cinegoers who are not critics have been ecstatic, so it is a bit of a surprise to come across this review that seems largely unimpressed.

Some of the criticisms do ring true, and I wonder whether Adivi Sesh was a bit too captivated with Major Sandeep to be the right screenwriter for a film about him. The same team's Goodachari was an excellent thriller with an ever-twisting screenplay, so it's disappointing Major is a misfire.

However, I really wish there was more focus on the build up around the Operation - There are very important considerations in that operation that could have been covered. From the time the terrorists land to NSG taking over, it was shown in a very hurried manner.

I felt the script was dumbed down to average audience instead of giving them a feel of how these operations are planned.

Finally, some depiction of NDA campus would be nice instead of shooting it near Golconda. The campus in the film is very small. The NDA dining hall shown was the size of a small cafe.

ADVERTISEMENT
This page was tagged for
MAJOR telugu movie
MAJOR reviews
release date
Adivi Sesh, Saiee Manjrekar
theatres list
Follow @fullhyderabad
Follow fullhyd.com on
About Hyderabad
The Hyderabad Community
Improve fullhyd.com
More
Our Other Local Guides
Our other sites
© Copyright 1999-2009 LRR Technologies (Hyderabad), Pvt Ltd. All rights reserved. fullhyd, fullhyderabad, Welcome To The Neighbourhood are trademarks of LRR Technologies (Hyderabad) Pvt Ltd. The textual, graphic, audio and audiovisual material in this site is protected by copyright law. You may not copy, distribute, or use this material except as necessary for your personal, non-commercial use. Any trademarks are the properties of their respective owners. More on Hyderabad, India. Jobs in Hyderabad.