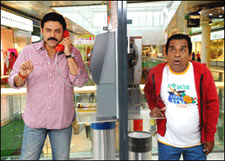 Deepa Garimella / fullhyd.com
EDITOR RATING
6.0
Performances
Script
Music/Soundtrack
Visuals
8.0
6.0
6.0
7.0
Suggestions
Can watch again
No
Good for kids
Yes
Good for dates
Yes
Wait for OTT
No
You don't plan a drive through the countryside just to get to a particular destination - chances are that you'd enjoy it for the sights and smells, for the company, and for the conversation. Namo Venkatesa is like sitting with people making banal conversation, traveling on a beaten path, in a gorgeous but sputtering car.

It really would have helped if the fuel didn't run out 2km before you were reaching your stop.

The problem is that Sreenu Vytla is known to have driven roller-coasters in the past, so when he drives a car for once, it feels a little more hollow than it should. Namo Venkatesa is not a bad film, but coming from a man used to delivering excellence, it falls short. Vytla is someone who simply cannot afford to even pause for breath - and if he does, he must do it when no one's watching.

Firstly, the plot of Namo Venkatesa is surprisingly twist-free. Venkataramana (Venkatesh) is a small-time ventriloquist who goes to Paris for a talent hunt, that's being organized by a crooked trio headed by Paris Prasad (Brahmanandam). When Venkataramana falls in love at first sight with Prasad's niece Pooja (Trisha), Prasad, a man who lives off swindling others, decides to milk this for whatever it's worth. So he asks the reluctant Pooja to play along and even pretend that she likes Venky, and the latter falls for the ruse.

Pooja is an orphan who is also the inheritor of a stupendous fortune, and is eyed by evil relatives (Mukesh Rishi, Jayaprakash Reddy) that include Prasad himself. Now she's brought back to India to be forced to marry a lout of a cousin (Subbaraju), and she has to be rescued from house arrest. So despite Pooja's pleas to Prasad to end the game with Venky, he continues the hoax because he, too, has a stake in saving Pooja.

There sure are plenty of hilarious dialogues and sequences in Namo Venkatesa, and maybe even a joke or two that you'd remember even after getting home. Comic timing isn't a problem here, either - the whole cast delivers.

However, what happens is that the entire movie is run on the premise of a guileless hero being conned. The comedy's supposed to come in to help release the indignation that you're feeling at the injustice - by showing how craftily the bluff is called. Instead, Namo Venkatesa gives up on the writing at a crucial time, and chooses to make Venky declare himself superhero and bash goons up by the dozen.

Then, the absence of romance, especially with a talented actress on board, is inexplicable. It's one man's imagination that's driving the courtship, and even taking it nowhere conclusive.

The lead pair looks like a million bucks, though. Venkatesh and Trisha pull off the expected quality of performances as well. Even if Brahmanandam's role tapers off pretty soon in terms of novelty, and the others have cliched roles, all the artistes are veteran entertainers.

The music is pleasant, though lacking in memorable tunes. Slick, glossy picturization helps the film along, and the songs are eye-candy.

See Namo Venkatesa full details
NAMO VENKATESA USER REVIEWS
1 - 4 OF 4 COMMENTS
POSITIVE  |  NEGATIVE |  NEWEST  |  OLDEST  |  MOST HELPFUL  |  LEAST HELPFUL
USER RATING
3.7
3 USERS
Performances
Script
Music/Soundtrack
Visuals
5.0
2.7
3.3
4.7
Can watch again - No
Good for kids - Yes
Good for dates - Unsure
Wait for OTT - Unsure
hari on 17th Jan 2010, 1:02pm | Permalink
as friends said, there is nothing new in this movie. its soo boring and predictable. and in this movie, brahmanandam character is too prolonged and boring. directors can't expect a hit by creating a boring comedy episode. pls dont encourage these type of movies. our movie industry need to develop, they just want money, they are showing up the talent.
anyways, this movie sucks.

SUNEEL on 15th Jan 2010, 9:17am | Permalink
there is nothing new offered in this movie and it's a old wine in old bottle...srinu vaitla repeats all the hilarious episodes of his previous movies and instead of feeling light we feel bored...


Pros: foriegn locales in songs
Cons: every thing else

ADVERTISEMENT
This page was tagged for
Namo Venkatesa telugu movie
Namo Venkatesa reviews
release date
Venkatesh, Trisha
theatres list
Follow @fullhyderabad
Follow fullhyd.com on
About Hyderabad
The Hyderabad Community
Improve fullhyd.com
More
Our Other Local Guides
Our other sites
© Copyright 1999-2009 LRR Technologies (Hyderabad), Pvt Ltd. All rights reserved. fullhyd, fullhyderabad, Welcome To The Neighbourhood are trademarks of LRR Technologies (Hyderabad) Pvt Ltd. The textual, graphic, audio and audiovisual material in this site is protected by copyright law. You may not copy, distribute, or use this material except as necessary for your personal, non-commercial use. Any trademarks are the properties of their respective owners. More on Hyderabad, India. Jobs in Hyderabad.